Chosing hymns and gifts for
tonight’s service of welcome 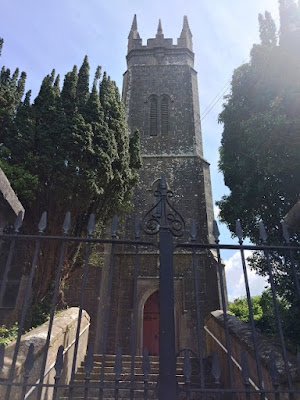 I moved into the Rectory in Askeaton, Co Limerick, late last night [19 January 2017] after a rehearsal earlier in the evening for tonight’s service of welcome and introduction in Holy Trinity Church, Rathkeale.

During the service, parishioners are bringing forward symbols of my ministry, and I have chosen these to symbolise different stages in my own journey in ministry. They include a chalice and paten made in Jerusalem and inscribed with the words Peace, bought in the Piazza Navona in Rome earlier this month; a stole bought some years ago in the Amity shop beside Holy Trinity Church, Shanghai, which became the Anglican cathedral with the consecration of Bishop William Russell, an Irish-born Anglican missionary, as Bishop of North China; oils that were blessed at the Maundy Eucharist in Christ Church Cathedral, Dublin; and an NRSV Anglicised translation of the Bible that I used when I was studying in Ealing Abbey a few years ago.

I have also chosen five hymns that in some reflect the task before but also reflect some of my own story too, my travels and my engagement with the mission of the Church.

The Processional Hymn, ‘For all the Saints’ (Irish Church Hymnal, 459), was written by Bishop William Walsham How (1823-1897) as a processional hymn for All Saints’ Day. When he wrote this hymn, Walsham How was Rector of Whittington, Shropshire. At the time, this was part of the Diocese of St Asaph, but following the disestablishment of the Church in Wales in 1920, the parish was transferred to the Diocese of Lichfield in the Church of England. He became a canon St Asaph Cathedral, and spent time in Rome as chaplain of the Anglican Church before returning to England.

While he was Bishop of Bedford, Walsham How became known as ‘the poor man’s bishop.’ He became the first Bishop of Wakefield, and he died in Leenane, Co Mayo, in 1897 while he was on holiday in Dulough.

The hymn vibrates with images from the Book of Revelation. The saints recalled in this hymn are ordinary people who, in spite of their weaknesses and their failings, are able to respond in faith to Christ’s call to service and love, and who have endured the battle against the powers of evil and darkness.

In its original form, this hymn had 11 verses, although three are omitted from most versions: the verses extolling ‘the glorious company of the Apostles,’ ‘the godly fellowship of the prophets’ and ‘the noble army of martyrs’ were inspired by the 1662 Book of Common Prayer version of the canticle Te Deum.

But the heart of the hymn is in the stanza in which we sing about the unity of the Church in heaven and on earth, ‘knit together in one communion and fellowship, in the mystical body of ... Christ our Lord.’ Despite our ‘feeble struggles’ we are united in Christ and with one another in one ‘blest communion’ and ‘fellowship divine’.

Of course I wold have to chose some music by Ralph Vaughan Williams (1872-1958). The tune for this hymn, Sine Nomine (‘Without Name,’ referring to the great multitude of unknown saints) was written by Vaughan Williams while he was editing the English Hymnal (1906) with Percy Dearmer. But I also wanted some link with Lichfield this evening, and Vaughan Williams was a direct descendant of Erasmus Darwin, who in the 18th century lived in Darwin House on Beacon Street, Lichfield, close to Lichfield Cathedral.

The Gradual Hymn, ‘We have a Gospel to proclaim’ (491), was written by Canon Edward Joseph Burns as a call to mission but was also written for use in a rural setting. Stanzas 2-5 of this hymn relate to the four key elements in the Gospel story: the Incarnation, the Crucifixion, the Resurrection and the Ascension leading to Pentecost.

The tune ‘Fulda’ is by William Gardiner, who claimed to be inspired by Beethoven, although musical scholars have failed to find a single source for the tune.

The hymn after the introduction and before the promises is ‘Lord, you gave the great commission’ (456). There is an association with my new diocese, with theological education and with the wider Anglican Communion. This hymn was introduced to the Church of Ireland after a previous Bishop of Limerick and Killaloe, Edward Darling, first heard the hymn when he was invited to preach in Florida in 1993. The author, Bishop Jeffery Rowthorn, has spent much of his life in theological education.

For the Offertory Hymn, I have chosen ‘How shall I sing that majesty’ (468) to the tune ‘Coe Fen.’ This is consistently voted one of the most popular hymn tunes, and for many years during my study weeks in Cambridge I have enjoyed long strolls by the Backs and through Coe Fen.

I have also asked for the inclusion of the verse in the New English Hymnal that was dropped in the Irish Church Hymnal (5th edition):

1 How shall I sing that majesty
which angels do admire?
Let dust in dust and silence lie;
sing, sing, ye heavenly choir.
Thousands of thousands stand around
thy throne, O God most high;
ten thousand times ten thousand sound
thy praise; but who am I?

2 Thy brightness unto them appears,
while I thy footsteps trace;
a sound of God comes to my ears,
but they behold thy face.
They sing, because thou art their Sun;
Lord, send a beam on me;
for where heav’n is but once begun,
there alleluias be.

3 Enlighten with faith’s light my heart,
inflame it with love’s fire;
then shall I sing and bear a part
with that celestial choir.
I shall, I fear, be dark and cold,
with all my fire and light;
yet when thou dost accept their gold,
Lord, treasure up my mite.

4 How great a being, Lord, is thine,
which doth all beings keep!
Thy knowledge is the only line
to sound so vast a deep.
Thou art a sea without a shore,
a sun without a sphere;
thy time is now and evermore,
thy place is everywhere.

Finally, the Post-Communion Hymn is ‘Sent forth by God’s blessing’ (443), was written by Omer Westendorf (1916-1997) in the wake of Vatican II. The tune ‘Ash Grove’ is a traditional Welsh harp melody first published by Edward Jones in 1802.