Scholarstown House … part of the
architectural heritage of Knocklyon 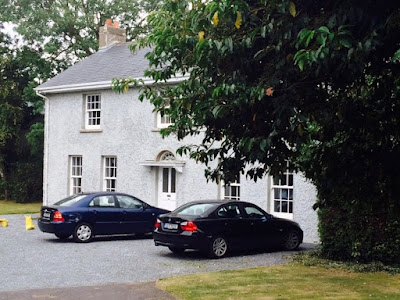 On my way home late yesterday I stopped to look at Scholarstown House, a handsome, well-proportioned early 20th century house with an interesting history. It is an attractive setting on Scholarstown Road, just a short walking distance from my house, and I pass it many times in any week.

Although Scholarstown House was built or rebuilt at the beginning of the last century, the house retains substantial original fabric and it shows the continuity of style and form with subtle modifications that are prevalent in buildings of this type.

By the time of his death in 1605, Archbishop Loftus was the owner, landlord and controller of much of the lands and estates in the Rathfarnham and Knocklyon area, including Scholarstown, Oldcourt, Tymon, Woodtown, Killakee, Ballycragh, Ballycullen and Mount Pelier Hill or the Hell Fire Mountain. His descendants soon became one of the most prominent, manipulative and long-tailed families among the landed aristocracy in Irish politics.

In 1691, the Rathfarnham estates, including Scholarstown, passed to Lucy Loftus when her father, Adam Loftus (1625-1691) of Rathfarnham Castle, Baron of Rathfarnham and Viscount Lisburne, died fighting on the Williamite side at the Siege of Limerick in 1691. The cannonball that blew his head off is now in Saint Patrick’s Cathedral, Dublin.

Lucy Loftus was his only daughter and heiress, and when she married Tom Wharton as his second wife the following year, in July 1692 she brought a vast fortune and estate to the marriage, augmenting Tom Wharton’s income by some £5,000 a year. Her vast Rathfarnham estates included Knocklyon, Scholarstown, Woodtown, Ballyroan, Ballycragh, and other tracts of land in Whitechurch, Cruagh, Firhouse, Oldcourt, Tymon and Tallaght.

Tom and Lucy Wharton were the parents of the infamous ‘Rake of Rathfarnham,’ Philip Wharton (1698-1731), who became Duke of Wharton and Earl of Rathfarnham. He inherited the Rathfarnham estate, including Scholarstown, when his parents died in 1716. He also inherited his parents’ great influence and wealth, with an estimated income of £14,000 a year. But he would quickly dissipate this heritage within less than a decade.

In 1723, while he was still only 24, Philip Wharton first tried to sell Rathfarnham Castle and Estates, including Scholarstown, to Viscount Chetwynd for £85,000. But he was forced to reduce his asking price when eventually he sold them for £62,000 to the Speaker of the Irish House of Commons, William Conolly. Conolly would never reside at either Rathfarnham Castle or Scholarstown House, instead letting both to a number of tenants.

Later, Philip married his second wife, Maria Theresa Comerford, in Madrid in 1726 – just three months after the death of his sadly neglected and abandoned first wife Martha. Maria Theresa’s mother, Henrietta Comerford, died in Madrid in 1747. Her step-father was Major-General John Comerford (ca 1665-1725), of Finlough in Loughkeen, Co Tipperary, of Waterford, and of Madrid.

‘Speaker’ Conolly, who bought the Rathfarnham estate in 1723, including Scholarstown House, left his name in local memory, and a field in the area was known as “Connolly’s Freehold.”

By 1901, the Jolly family was living in Scholarstown House. They owned a dairy yard and shop in Rathfarnham village, and rebuilt and restored the fire-damaged house in the 1900s.

The Jolly family sold Scholarstown House to the O’Brien family in 1928. The surrounding farmland has been sold off in recent decades for housing development, but Scholarstown House remains an interesting part of the architectural and historical heritage of the Knocklyon and Rathfarnham area. 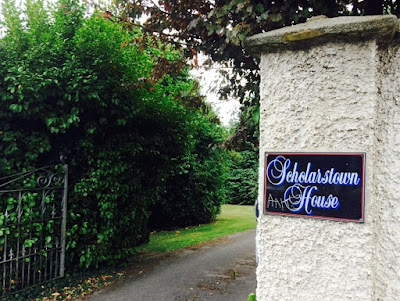 Scholarstown House is part of the architectural heritage of the Knocklyon and Rathfarnham area (Photograph: Patrick Comerford, 2015)