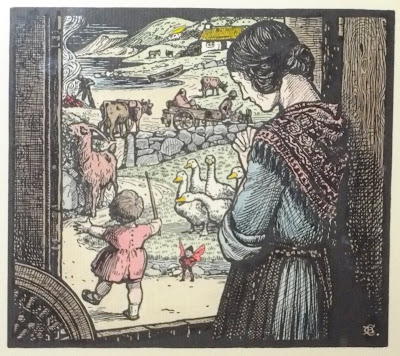 An illustration from ‘Songs of Leinster,’by Winifred M. Letts, published in 1913

My choice of a Poem for Lent this morning is ‘In the Street,’ by Winifred Mary Letts, first published in her collection, Songs from Leinster, in 1913.

Winifred Mary Letts (1882-1972) was a minor poet, playwright and novelist who regarded herself as Irish although she was born in England. She was born on 10 February 1882 in Broughton, Salford. Her father, the Revd Ernest Letts, was a Church of England vicar; her mother, Isabel Mary Ferrier, was from Knockmaroon, near the Phoenix Park in Dublin.

With her two elder sisters, she spent many childhood holidays in her mother’s home at Knockmaroon, which would later give the title to one of her books, and many biographical notes actually say she was born in Dublin. After her father’s death, she and her sisters returned to Dublin with their mother. They lived in Dal Riada, Blackrock, and she went to school in Alexandra College.

She began her literary career as a playwright, writing two one-act plays for the Abbey Theatre, The Eyes of the Blind (1906) and The Challenge (1909), before she started writing novels and children’s books.

Her first poetry collection was Songs from Leinster (1913), a volume full of the poems about simple people and humble souls. Although she called herself “a back-door sort of bard,” she was particularly effective in the old ballad measure and in her quaint portrayal of Irish peasants. Her early work was concerned almost entirely with the humour and pathos found in her immediate surroundings. Later poems show her love of rural and provincial Ireland, particularly Co Wexford and Co Wicklow.

During World War I, she was a war-time nurse, and in 1916 she published Hallowe’en and Other Poems of the War. The collection was re-issued the following year as The Spires of Oxford, and other Poems. A “Publisher’s Note” in this 1917 volume explained that “The verdict of the public, as shown by continual requests to republish, is that The Spires of Oxford is the most important poem in the volume – and therefore in issuing a new edition with several new poems, we bow to this verdict and give ‘The Spires of Oxford’ its place in the forefront of the volume.” 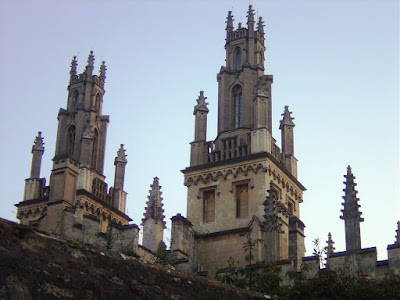 ‘I saw the spires of Oxford / As I was passing by ...’ (WM Letts). Oxford was first described by Matthew Arnold as the “city of dreaming spires” (Photograph: Patrick Comerford)

The Spires of Oxford

The years go fast in Oxford,
The golden years and gay,
The hoary Colleges look down
On careless boys at play.
But when the bugles sounded war
They put their games away.

They left the peaceful river,
The cricket-field, the quad,
The shaven lawns of Oxford,
To seek a bloody sod—
They gave their merry youth away
For country and for God.

God rest you, happy gentlemen,
Who laid your good lives down,
Who took the khaki and the gun
Instead of cap and gown.
God bring you to a fairer place
Than even Oxford town.

Her poem ‘The Deserter,’ also written in 1916, describes the feelings and fate of a man terrified by the war, and is often used in collections of World War I poetry.

Two of William Verschoyle’s sons had been killed in World War I. It is said that their mother, Frances HH Verschoyle (nee Jackson), who was born in France and died in 1924, never recovered from her tragic loss. During the Irish War of Independence and the Civil War, William Verschoyle received threatening letters, and on one occasion was even shot, but he bravely chases his assailant across the fields and captured the gun.

Winfred continued to write, publishing three novels and five books for children. Knockmaroon (1933), a reminiscence of her childhood in her grandparents’ house in Dublin, is considered her finest book.

After her husband’s death in 1943, she lived for a time with her sisters in Faversham, Kent. She returned to Ireland in 1950 and bought Beech Cottage in Killiney, Co Dublin, where she lived until finally moving to Tivoli Nursing Home in Dún Laoghaire, in the late 1960s.

She died in 1972 and is buried with her husband in Rathcoole, Co Dublin. Her obituary in The Irish Times was written by Monk Gibbon, whose father, Canon William Monk Gibbon, had been George Verschoyle’s rector in Taney.

Her poetry is forgotten by many today, while those who do remember it often dismiss it as doggerel, or they are irritated by her way of reproducing Irish accents. But she had an undoubted love of this island, and her deep religious faith and her war-time conscience and compassion for the suffering of soldiers has been compared to that of Housman.

This morning’s poem, ‘In the Street,’ which provides insights into a simple spirituality and piety that we might associate with Lent, was published in her collection, ‘Songs of Leinster.’ 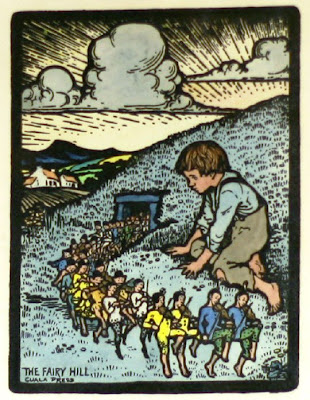 ‘The Fairy Hill,’ a hand-coloured print by Cuala Press, with a verse by Winifred M. Letts, sold by Mealy’s in December 2011

In the Street, by Winifred M Letts

I’ve seen a woman kneeling down

In the dirty street.
An’ she took no heed of her tattered gown.

Or the broken boots on her feet;
An’ she took no heed of the people there,
Rich and poor that would stand and stare
At a woman kneeling in prayer
In the street.

For the thing that she spied
At the back of the great shop window pane
Was a cross with a Figure crucified.
She took no heed of the driving rain.
An’ thim that would turn to look again;
She took no heed of the noisy street,
But knelt down there at her Saviour’s feet.
What matter at all what the place might be?
To one poor soul it was Calvary.