Throughout this Advent, I have been encouraging all I meet to support agencies and organisations that work with Syrian refugees in Greece, especially the Anglican mission agency Us (the new name for USPG, the United Society for the Propagation of the Gospel).

However, this afternoon, I turned to home-based charities and spent some hours outside Saint Ann’s Church, Dawson Street, shaking and rattling the collection buckets to the sound of Christmas music for the annual ‘Black Santa Sit-Out’ organised by this parish in Dublin’s south inner city.

I joined the Vicar of Saint Ann’s, Canon David Gillespie, the Verger, Fred Deane, and Mervyn Jones just as the carol singers were leaving Saint Ann’s after a morning’s work in support of this appeal.

Unlike last winter, there was no rain today, and I was able to wrap myself up well against the chill factor that made the day feel colder than it actually was. And it was all worth while.

The sit-in was launched last Thursday [17 December 2015] by Archbishop Michael Jackson and the Lord Mayor of Dublin, Críona Ní Dhálaigh, who were joined by 60 schoolchildren from Kildare Place School, Rathmines, who provided festive musical accompaniment under the direction of their principal, Ian Packham.

This is the 15th year that this sit-out appeal has been held at St Ann’s, and to date it has raised over €400,000 for charity. The Black Santa Appeal gets its name because the clergy involved wear black cloaks. The original concept began in 1975 when Dean Samuel Crooks started standing outside Saint Anne’s Cathedral, Belfast, at Christmas time. A similar idea was taken up by my dear friend, the late Canon Norman Ruddock, when he became Rector of Wexford 20 years ago, and is being continued by his successor, Canon Arthur Minion.

Dawson Street is lined with coffee shops, boutiques and big-name clothes shops. Despite the disruption caused by recent works laying tracks for a new Luas line, it remains one of Dublin’s most fashionable shopping streets. Those who passed by and stopped included colleagues and former colleagues from Trinity College Dublin and The Irish Times, and parishioners from throughout Dublin.

As with last year [2014] and my experience two years before that [2012], I could not avoid being impressed once again to see people rolling up €50, €20 and €10 notes to place in the collecting tins. But I am more impressed to see some people putting in small change, counting out what they could afford and leaving themselves with only enough coins for the bus fare home, or deciding to forgo that cup of coffee they may have planned as a treat today.

Of course, the widows’ – and widowers’ – mite are always the most impressive contribution … indeed, on a cold afternoon, as the darkness closes in, they are the most heart-warming.

I was cheered too by children pointing me out to their parents, remarking on my white beard, and asking (despite the fact that I was covered in black clothing from head to toe): “Is that the real Santa?”

One group of children wanted a special photograph with me after their parents explained to them that I was “Santa’s elder brother.” Indeed!

The sit-out at Saint Ann’s continues outside this city centre church each day until late on Christmas Eve, singing carols and collecting money for homeless charities.

By the end of today, we had surpassed the record €30,000 collected last year. Every cent collected goes to local charities, including the Salvation Army, the Simon Community, the Society of Saint Vincent de Paul and the Peter McVerry Trust, which all work with the homeless. Other charities supported include Protestant Aid, Barnardos, the Laura Lynn Foundation and the Solas Project. Indeed, this is not so much charity as justice.

If you still have Christmas shopping to do in Dublin, and you are in the city centre, remember there are still two or threedays to go until Christmas, and call around to Saint Ann’s in Dawson Street. Even a cheery word will raise the morale of my friends and colleagues. And you could make a difference to one homeless person or family this Christmas. 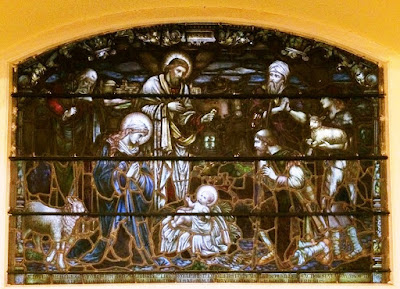 Posted by Patrick Comerford at 19:39 No comments:

Waiting in Advent 2015 with
Dietrich Bonhoeffer (24)

‘…the powerful and great tremble at the cross of Jesus Christ’ … the rood beam in Saint Chad’s Church, Stafford, with a large crucifix and figures of the Virgin Mary and Saint John (1922) (Photograph: Patrick Comerford)

We are in the last few days before Christmas this morning [22 December 2015]. During the season of Advent this year, I am working my way through my own Advent Calendar. Each morning, I am inviting you to join me for a few, brief moments in reflecting on the meaning of Advent through the words and meditations of the great German theologian and martyr, Dietrich Bonhoeffer (1906-1945).

In making the connection between the truth of the manger and the cross, between Christmas and Easter, Bonhoeffer once said:

“There are only two places where the powerful and great in this world lose their courage, tremble in the depths of their souls, and become truly afraid. These are the manger and the cross of Jesus Christ.”