A few days in Kilkenny learning
about Franciscan spirituality 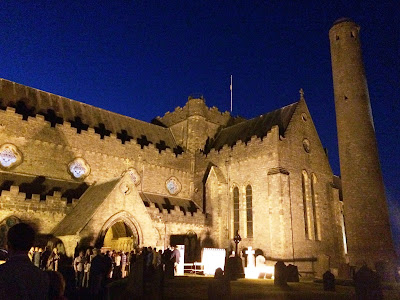 I am in Kilkenny for the next few days, staying in the Newpark Hotel on Castlecomer Road and attending the Dublin and Glendalough clergy conference.

Our principal speaker is Brother Philip Bartholomew SSF, who is speaking on the topic of “Ministry Today: A Franciscan Approach.”

Brother Philip Bartholomew was born in Northern Ireland in 1947 and after leaving school he trained as an organ builder and co-founded the Wells-Kennedy partnership in 1962 He joined the Society of Saint Francis (SSF) in 1977, was ordained priest in 1999, and has been an associate priest in an East End parish in London since 2008.

The Newpark Hotel is 10-minute walk from both Saint Canice’s Cathedral and the centre of Kilkenny, and the house is set in 40 acres of parkland and beautiful gardens.

Tomorrow [2 February 2016] there is an opportunity for a tour of Saint Canice’s Cathedral, before a celebration of the Eucharist on the Feast of the Presentation, which we celebrated a little early in Christ Church Cathedral, Dublin, last night [31 January 2016].

I missed this conference last year because of a change of dates and an earlier commitment to a lecture organised by the Genealogical Society of Ireland.

During these few days, I hope to have an opportunity for early morning walks by the river bank, to visit some of my favourite buildings in Kilkenny, including the Butterslip, Rothe House, the Shee Almshouse, the gallery in Kilkenny Castle, the recently-restored Saint Mary’s Church, or perhaps even to get out to the old Comerford ancestral home at Ballybur Castle in Cuffesgrange, halfway between Kilkenny and Callan. And I may even have an early morning swim in the hotel pool.

The Newpark Hotel is a family-owned hotel which was bought by the Flynn family in 2008. Other hotels in the group include the Park Hotel, Dungarvan, Co Waterford, the Imperial Hotel, Cork, and the Old Ground Hotel, Ennis, Co Clare.