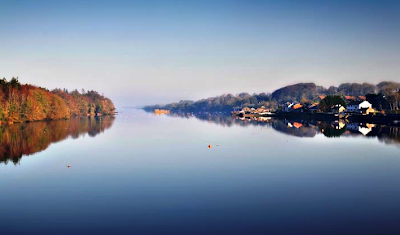 The Moy Estuary provides a spectacular background for the Ice House Hotel in Ballina, Co Mayo

Thanks to a generous present, I am in Ballina, Co Mayo, staying in the Ice House Hotel – a boutique hotel perched on the edge of the River Moy in Ballina. This is an independently-owned, four-star hotel in a lovingly-restored 19th century “Ice Store.”

The Ice House Hotel was originally called “The Iceland Cottage” or “Iceland House” and was strategically positioned on the Moy Estuary. It was built in 1859 as an ice store, and is a set on a picturesque stretch of the Moy Estuary.

In the Ice House Hotel, new and old are clearly defined in the transparent glass structures that set the original building apart, with picture windows and a spectacular backdrop. The building’s heritage has been maintained sensitively, with a design that reflects both the traditional furnishings and décor.

In the 19th century, the Little family founded the Moy Fishery Company and rebuilt the Salmon Weirs at the falls of the River Moy, where drifting nets were positioned further downriver. The fish caught there in large numbers were taken to Killala Bay and transferred to bigger boats and then sent on to Dublin or exported to Liverpool. Between 1882 and 1893, the fish exports from the river totalled between 120 and 130 tons of salmon.

The business required large supplies of ice, which was also needed by two local breweries for the year-round production of beer. The house is in a strategic location on the Quay, at the edge of the River Moy, where the ice vaults probably drained. The road-facing elevation has a large central archway that provided easy access to the vaults.

New and old are clearly defined in the transparent glass structures that set the original building apart, with picture windows and a spectacular backdrop

The present Ice House is a substantial two-storey Neo-Tudor double pile over three large cellars, and was built by Little family business in 1859 on the site of an earlier icehouse on the location of the present building. John Little, who managed the salmon weirs, leased the property from the Lindsey family for an annual rental of £7. 10s.

The Ice House continued as an ice store even after it was incorporated into a domestic residence. While the basement was used as a cold store for salmon exports, the rest of the house was home to the manager of the Moy Fishery Company.

Filling the cellars was an annual event that involved every able-bodied person in town. During the winter, when the local lakes and ponds froze, farmers and quay workers harvested the ice by breaking it into large chunks with pick axes and sledge hammers. The chunks were then taken on carts to the ice house, where they were crushed with long handled wooden mallets and thrown into the cellars.

During mild winters, additional supplies of ice were imported from Norway and Sweden, with ice ships arriving at the quay in Ballina loaded with hundreds of tons of ice.

Because of gradual climate change over the years, less and less ice was produced locally. By the 1920s and 1930s, about one winter in ten alone was cold enough to fill the cellars. In December 1938, for the first time in 12 years, the manager of the Moy Fisheries was unable to open the Ice House vaults for a supply a local ice.

With the introduction of mechanical refrigeration, the Ice House fell into disuse as an ice store. It remained in residential use until 1989, when the state acquired the Moy Fisheries, and it has since been transformed into the hotel where I am staying tonight.