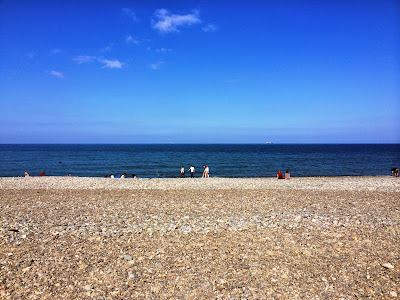 Midsummer Day on the beach in Bray this afternoon (Photograph: Patrick Comerford, 2014)

The Summer Solstice is traditionally regarded as Midsummer’s Day in Ireland, although Midsummer is often marked on Saint John’s Day [24 June], six months before Christmas Eve, in many other European countries and in different parts of Northern European celebrations take place on days between 21 and 25 June, depending on local traditions and cultures.

In Greece, 23 June, as the eve of the day of the Nativity of John the Baptist, is celebrated with festivals in many towns, villages and isles.

In England, 24 June was traditionally marked as Midsummer Day, and the feast of Saint John the Baptist is one of the quarter days in England. Midsummer Common in Cambridge is so named because King John granted a charter to Barnwell Priory for an annual Fair here on Midsummer’s Eve, sometime between 22 and 25 June. The Fair was gradually extended to 14 and later degenerated to a large “fun fair.”

In England, Midsummer Night was traditionally the night 23/24 June, and was marked by partying and dancing and shrouded in superstitions about enchantment, witchcraft and midsummer madness.

So William Shakespeare’s play A Midsummer Night’s Dream is set not on 20 or 21 June but a few days later, on the night of 23/24 June.

So the Summer Solstice is not the same day as Midsummer Day and some websites even refer to today as the “first day of summer.” 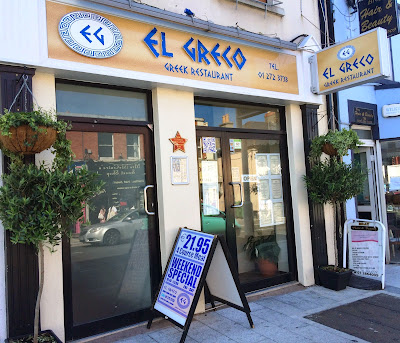 Whether or not this is Midsummer’s Day, two of us took advantage of the warm summer sunshine, and headed south for a taste of Greek summer in El Greco, a new Greek restaurant on Main Street in Bray, Co Wicklow.

El Greco, which opened last February 2014, is owned by Prokopis (Steve) Kaludis from Corfu and his business partner Mona Sararoiu from Hunedoara in Romania. Steve has been living in Ireland for the past 20 years and between them Steve and Mona have over 30 years experience in the business.

Already, El Greco has deservedly received a 2014 star from Lucinda O’Sullivan and reviews on TripAdvisor have quickly made El Greco restaurant one of the best restaurants in Bray. 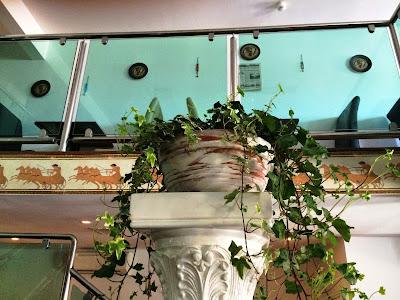 El Greco seems such an appropriate name for a Greek restaurant that opened this year.

Crete, which is the birthplace of El Greco, the Renaissance master Domenicos Theotokopoulos, has started a programme off a round of exhibitions to mark ‘El Greco Year’ and the 400th anniversary of the death of the old master. The exhibition, Domenikos Theotokopoulos between Venice and Rome, opened in the Historical Museum of Crete in Iraklion yesterday [20 June 2014].

From El Greco, we made our way up to the nearby Town Hall, which for many years has, regrettably, housed a well-known fast food outlet – fast food and Greece just do not go together, but this seems to be debased use of a wonderful piece of architectural heritage. 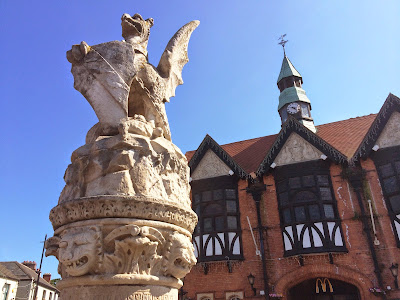 The Town Hall and Market Place, which was opened in 1884, was a gift to Bray from Reginald Brabazon, Lord Brabazon, son of the 11th Earl of Meath, and Mary, Lady Brabazon, his altruistic wife and only daughter of Thomas Maitland, 11th Earl of Lauderdale.

However, the design of the Town Hall is essentially the work of Sir Edward Guy Dawber (1861-1938), a young assistant in Deane’s office who was born in King’s Lynn in Norfolk in 1861. Part of his building was inspired by Sparrowe’s House in Ipswich, built ca 1670.

Hidden behind a gate at the rear of the building is an inscribed plaque with a pious and irenic exhortation:

Who traffic here beware no strife ensue
In all your dealings be just and true
Let conscience strictly in the scale be weighed
So shall ye call God’s blessing on your trade.

Dawber worked primarily in the Arts and Crafts style. After he returned to England, he ran his own highly successful practice, became renowned for his devotion to preserving rural England, was elected president of the Royal Institute of Architects (1925-1927), and was knighted in 1936.

From the Town Hall, we strolled down to the Esplanade at the beach in Bray, where families were taken advantage of the summer sunshine and the weekend to enjoy the day … whether it was the Summer Solstice, the first day of Summer or Midsummer Day. 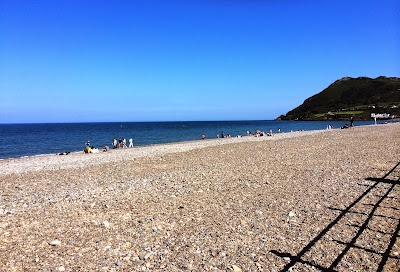 Posted by Patrick Comerford at 20:27 No comments: