A street of honest brokers, despite the
logical paradox posed by one of their poets 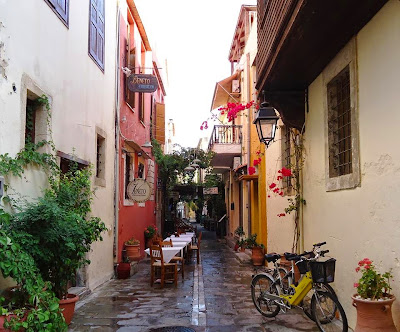 Epimenidou Street in the early morning ... an inviting narrow street in the old town of Rethymnon (Photograph: Patrick Comerford)

The old town in Rethymnon has many charming, narrow side streets and back streets, often lined with tables from restaurants and tavernas.

One of the charming back streets is Epimenidou Street, with its boutique hotels and inviting restaurants.

The street takes its name from Epimenides (Ἐπιμενίδης) of Knossos, who is a semi-mythical philosopher and poet, said to have lived in the 7th or 6th century BC. It is said that while Epimenides was tending his father’s sheep, he fell asleep for 57 years in a cave in Crete that was sacred to Zeus. When he awoke after 57 years asleep, Epimenides is said to have found he was endowed the gift of prophecy.

Aristotle and Plutarch say Epimenides purified Athens after the pollution brought by the Alcmaeonidae, a powerful noble family who negotiated an alliance with the Persians during the Persian Wars, despite the fact that Athens was leading the resistance to the Persian invasion. Pericles and Alcibiades also belonged to the Alcmaeonidae, and during the Peloponnesian War the Spartans referred to the family’s curse in an attempt to discredit Pericles.

He died in Crete at an advanced age, and legends say he he lived until he was almost 300 years old. But another legend says he was captured in a war between Spartans and Knossos, and that he was put to death by his captors for refusing to prophesy favourably for them.

Several prose and poetic works have been attributed to Epimenides. But all of his works are now lost, and we only know of them through quotations by other authors. In a fragment of one of his poem, citied in the Hymn to Zeus of Callimachus, Minos of Knossos addresses Zeus:

But perhaps Epimenides is best remembered today because he is quoted twice in the New Testament.

While speaking to a group of Epicurean and Stoic philosophers in front of the Areopagus in Athens (see Acts 17: 22-34), Saint Paul, in verse 28, quotes from Epimenides’ Cretica: “For ‘In him we live and move and have our being’.”

In this address in Athens, Saint Paul is citing the fourth line in the Hymn to Zeus of Callimachus, with its reference to one of “your own poets” (Acts 17: 28). In the same speech, Saint Paul also quotes from Aratus’ Phaenomena: “For we too are his offspring” (see verse 28).

When Saint Paul spoke to Saint Titus concerning his mission in Crete, he committed a logical fallacy by quoting Epimenides: “It was one of them, their very own prophet, who said, ‘Cretans are always liars, vicious brutes, lazy gluttons.’ That testimony is true” (Titus 1: 12-13a).

The “lie” of the Cretans is that Zeus was mortal, for Epimenides believed that Zeus is dead. The logical inconsistency of a Cretan asserting all Cretans are always liars may not have occurred to Epimenides, nor to Callimachus, who both used the phrase to emphasise their point, without irony.

However, Saint Paul must have thought long about the idea of a dead god and whether the god’s tomb was dead as he sought to preach the Resurrection in Crete.

Epimenides is first identified as the “prophet” in Titus 1: 12 by Clement of Alexandria (Stromata 1, 14). Clement mentions that “some say” Epimenides should be counted among the seven wisest philosophers. But he does not indicate that the concept of logical paradox is an issue

However, it is not clear when Epimenides became associated with the Epimenides paradox, a variation of the liar paradox. Saint Augustine restates the closely related liar paradox in Against the Academicians (III.13.29), but he does so without mentioning Epimenides.

Paradoxically, I have to say I have found the restaurateurs and tavern owners of Epimenidou Street, like all their fellow Cretans, to be truthful and honest.

Many years ago, back in the 1980s, as I entrusted someone with Crete with my wallet and valuables as I went for a swim, I was advised that it was tourists and foreigners I needed to watch out for.