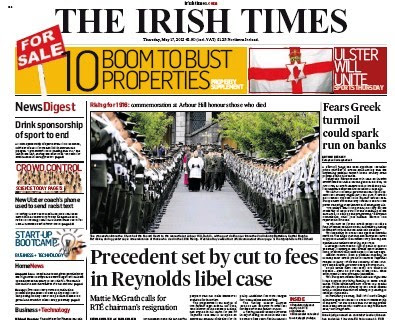 The Irish Times today [17 May 2012] carries the following editorial comment:

OVER THE past few days, the 12 bishops of the Church of Ireland must have thought long and hard about the fallout from the divisive votes in the General Synod last weekend, and the catastrophic effects of a debate that leaves them sorely divided. The voting has shown the Church of Ireland is deeply divided between North and South, between evangelicals and liberals, and even between conservative evangelicals and “open” evangelicals.

The General Synod was given one opportunity after another to show it is a welcoming church. In all there were six votes – four on amendments to a motion on marriage and sexuality, one on the motion itself, and one when the Archbishop of Armagh called on the bishops to stand up and be counted. That final vote must have left the bishops asking themselves how, if they cannot show unity among themselves, they can demand unity from the clergy and the laity.

The final resolution emphasises an understanding of marriage defined by one narrow part of canon law alone, without any reference to the Bible, the 39 Articles, which are foundational for Anglicanism, or the Book of Common Prayer, which contains the marriage services.

The General Synod has opted for a definition of marriage founded on law rather than grace, in legalistic terms rather than theological concepts, leaving doubts now over pastoral attitudes to divorced people who remarry or couples who have civil marriages. This was never a debate about homosexuality alone. While the catalyst had been the civil partnership of one prominent clergyman, civil partnership is not mentioned anywhere in the final resolution. The synod votes have damaged the openness, acceptance and dialogue the Church of Ireland was moving towards after a conference in Co Cavan just two months ago.

The carefully choreographed niceness of the Ballyconnell conference disappeared in 4½ hours of debate and wrangling. A listening process that had only just begun has been abandoned.

Many gay clergy must now fear making their sexual orientation known. Like a similar resolution passed by the world’s Anglican bishops at the Lambeth Conference in 1998, this resolution may now be used to exclude gay and lesbian members from the life of many parishes and some dioceses. A chill wind may now be blowing through the Church of Ireland for those who want a more welcoming, open and tolerant church.

Posted by Patrick Comerford at 07:31 No comments: