The unruly mediaeval clergy
in a parish in north Co Kerry

The ruins of Aghavallin Church on the edges of Ballylongford, Co Kerry (Photograph: Patrick Comerford, 2017)

During my afternoon visit to Carrigafoyle Castle and Carrig Island last weekend, I went in search of the old Church of Ireland parish churches in Aghavallin and Ballylongford.

The churches have been closed for many decades, but they are still fondly remembered in this group of parishes. Although the parish of Aghavallin or Ballylongford has long been part of the grouping that includes Kilnaughtoin or Tarbert, this parish and its parishioners still maintain their distinct identity, and I thought it would be worth looking for the church and its mediaeval story.

The name Aghavallin may mean the ‘field of the little bed,’ and the parish and its ancient church were long associated with the O’Connor Kerry family, who built nearby Carrigafoyle Castle.

The first clergy in the parish are recorded as late as the 15th century, when the parish was served by a succession of members of the O’Kennelly family, although some of them were appointed vicar despite not being ordained.

In spite of popular images of celibacy and clerical discipline in the late mediaeval church, many of these vicars were married, were father-and-son, and were not ordained until after they had secured office. Some of them seem to have been poorly educated, and many had their legitimacy challenged in diocesan courts and as far as the papal court in the Lateran in Rome.

The first named parish priest or vicar of Aghavillin was Maurice Y’Kinnaelagh or O’Kennelly, a priest of the Diocese of Ardfert, who was appointed Vicar of Achayghwalan in 1402 on condition that he was ‘found fit in Latin.’

The next recorded vicar, Maurice Y’Kynnelyd, seems to have been in the parish from about 1418, but was not ordained priest until 1427. He was then deprived of the parish in favour of his son, Thady O’Kynelyd (O’Kennelly), who was appointed on condition that he was tonsured.

However, there is some confusion in the records about what followed afterwards. In one account, Thady is said have been forced to leave the parish because he was not ordained. In another account, Thady is said to have remained in the parish until he died in 1449. In the meantime, two other vicars are named in the parish: Donatus O’Chinnela or O’Kennelly, who held the parish for over a year until 1432, when he was deprived because he had not been ordained priest, and Cornelius O’Chuachall or O’Tuohill was appointed when Donatus was removed.

When Thady O’Kinaladh or O’Kennelly was removed in 1449 because he had not been ordained priest, he was replaced by John O’Colmayn or O’Colman, whose appointment was disputed because he was illegitimate.

Cornelius O’Chomychur or O’Connor claimed the parish as Cornelius O’Tuohyll’s successor because John O’Colmayn or O’Colman had held it for a year without being ordained priest. The challenge was brought to court in Limerick, and eventually decided in favour of Cornelius O’Connor in 1452.

For the rest of the 15th century, there was a series of disputes about the appointment of rectors and vicars, with accusations of simony, perjury and illegitimacy and claims that those appointed were either not properly ordained or already held appointments in the Diocese of Lismore or were refusing to live in the parish.

In the post-Reformation and post-Restoration eras in the 16th and 17th centuries, many of the Vicars of Aghavallin were pluralists. Sir John Morgan, who was Precentor of Ardfert, was Vicar of Aghavallin, Listowel, Disert, Liselton and other parishes by 1675, but because of his infirmities he was given leave of absence from the parishes in 1679 and again for six months in 1681. During his lengthy absences, the Revd William Robinson served the parish as curate. But eventually, in 1696, Morgan was deprived for non-residence.

The Revd Anthony Stoughton was appointed Vicar of Aghavallin on 11 June 1781, a day after he was ordained priest, and when he was still only a 20 or 21-year-old. The Stoughton family claimed the right of presentation or to nominate the vicars of the parish and to collect the tithes.

When Anthony Stoughton died in 1833, Thomas Stoughton presented the Revd Edward Maynard Denny, a grandson of Anthony Stoughton, to the parish. During his time as vicar, the church was rebuilt around 1840, and Horatio Herbert Kitchener, the future Earl Kitchener of Khartoum, was brought to the church to be baptised in September 1851.

A new church was built nearby in Ballylongford in 1858. After the Disestablishment of the Church of Ireland, the Vicars of Kilnaughtin (Tarbert) were also Vicars of Aghavallin from 1872 to 1878, when the parish was united with the parish of Listowel.

The new church closed in Ballylongford, the mid-20th century, was sold, and has since been demolished, the site used for building a family home. But the ruins of the older church still stand on the old mediaeval site at Aghavallin, surrounded by old graves and tombs. The graves in the church and churchyard include the Collis, Colt, Crosbie, Fitzell, Lindsay, Ponsonby, Pope and Sandes families, but I could find no graves for the Kitchener family.

The church itself is fenced off, with a warning that the building is unsafe to enter. The old baptismal font now stands beside the porch at the entrance to Saint Brendan’s Church in Kilnaughtin, Tarbert.

Many of the family vaults and tombs in the churchyard at Aghavallin are overgrown (Photograph: Patrick Comerford, 2017) 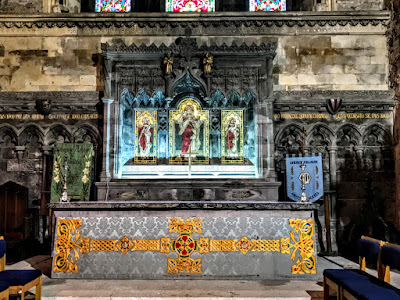