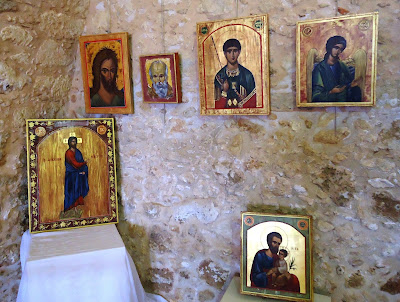 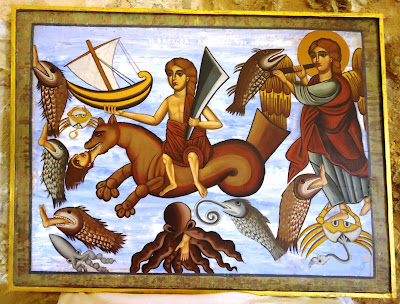 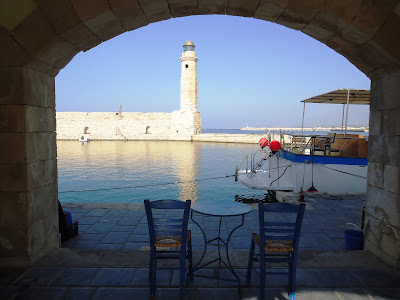 Posted by Patrick Comerford at 17:42 No comments:

The politician from Rethymnon who
became Prime Minister of Greece

The name of Tsouderon Street in Rethymnon honours a former Greek prime minister who was born in the town (Photograph: Patrick Comerford, 2013)

For the next week I am staying in Pepi Studios on Tsouderon Street in Rethymnon. The name of the street honours the former Greek Prime Minister, Emmanuel Tsouderos (Εμμανουήλ Τσουδερός) (1882-1956), who was one of the best-known Greek political figures to have been born in Rethymnon.

Tsouderos was involved in the moves that led to Crete being integrated into the modern Greek state 100 years ago in 1913; he played a critical role in establishing the Bank of Greece during another financial crisis in the 1920s; and during World War II, he was involved in the resistance movement. He served briefly as Prime Minister of Greece, then as Prime Minister in the Greek government-in-exile, and he came close to securing an agreement with Britain that would have seen Cyprus becoming part of the modern Greece state in lieu of war reparations.

Emmanuel Tsouderos was born in Rethymnon in 1882, when Crete was still a part of the Ottoman Empire. He left his native Crete to study law at Athens University, and economics in Paris and London. When he returned to Crete at the age aged 24, he was elected to the Cretan Legislature (1906–1912), which ruled the island while Crete had autonomous status under the protection of Russia, Britain, France and Italy.

After ενωσις (enosis) or the union of Crete with Greece 100 years ago in December 1913, Tsouderos was elected to the Greek Parliament. Soon after, he joined the Liberal Party of the Cretan-born Prime Minister Eleftherios Venizelos and was elected to the National Assembly again in 1915 and 1920. From 1919 to 1929 he represented Greece in many international meetings on commercial and economical issues and in talks on the Greek national debt. 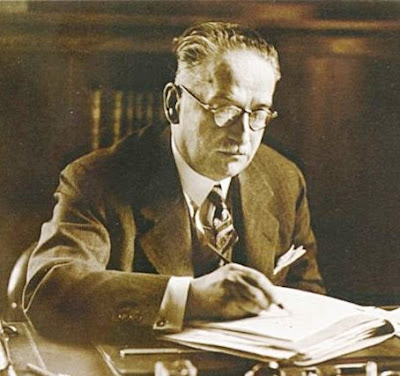 He was a vocal opponent of the Metaxas dictatorship, and Metaxas sacked him from the bank in 1939. Then, in 1941, as the Nazi army advanced towards Athens, the Greek Prime Minister, Alexandros Koryzis, committed suicide on 18 April, and Tsouderos succeeded him as Prime Minister of Greece on 21 April 1941. Eight days later, on 29 April 1941, as the army command prepared to capitulate, a defiant and heroic Tsouderos fled from Athens to Crete with King George II. Back in his native Crete, Tsouderos reorganised the Greek forces to resist the inevitable German invasion.

Tsouderos fled again during the Battle of Crete a month later. He went to the Middle East and later to Egypt. Tsouderos then headed the Greek government in exile from 29 April 1941 until 13 April 1944. The government was initially located in London, but subsequently moved to Cairo.

As Prime Minister, he signed a memorandum with the British government in 1942 that agreed that Greece would receive control of Cyprus as a war indemnity. However, under British pressure, he resigned as Prime Minister on 13 April 1944. He later served in the government-in-exile under Sophocles Venizelos. 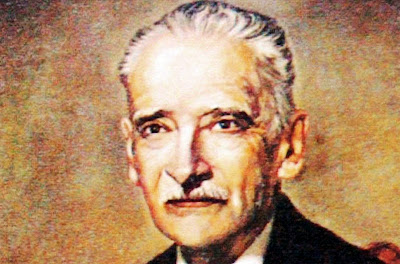 Emmanuel Tsouderos, who was born in Rethymnon, was the war-time Prime Minister-in-exile of Greece

In the first post-war, centre-left cabinet of the by-then elderly Themistocles Sophoulis, he was Deputy Prime Minister and Minister of Co-ordination from November 1945 to April 1946. In the cabinet of General Alexandros Papagos (1883-1955), an ageing general who had crushed the left in the Greek Civil War, he was Minister without Portfolio from November 1952 to October 1955.

Tsouderos died at the age of 74 in Nervi, Genoa, on 10 February 1956. He donated his papers to the Gennadius Library in the American School of Classical Studies at Athens.

His daughter, the journalist, writer and economist Virginia Tsouderou, is a former Deputy Foreign Minister and New Democracy deputy. She was born in Iraklion in Crete and studied at Oxford, the University of Minnesota and Radcliffe-Harvard. She is a founding member and honorary president of the Greek branch of Transparency International.

Recently, she has been critical of the parlous state of Greek politics and public life. “There has been a silent agreement between the two main parties for decades that there was no political corruption in Greece,” she said recently. “But people are so angry now that if the government does not open up and crack down on corruption there will be big trouble.”