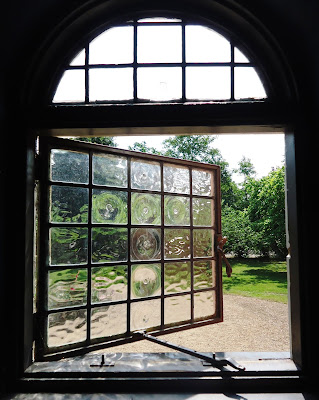 Looking out on the world ... in the original chapel in the Old Rectory in the Monastery of Saint John the Baptist in Tolleshunt Knights (Photograph: Patrick Comerford, 2013)

I spent most of Wednesday [17 July 2013] in the Essex countryside, more than 75 km south-east of Cambridge, visiting the Patriarchal Stavropegic Monastery of Saint John the Baptist in Tolleshunt Knights, near Maldon.

This mixed community of monks and nuns is the oldest Orthodox religious community in Britain, and a day in the monastery has become a regular annual feature of the summer school organised by the Institute for Orthodox Christian Studies in Cambridge.

The religious community was founded in 1958 by Elder Sophrony (Sakharov) with an initial membership of six drawn from a number of countries, and since 1965 the monastery moved under the direct jurisdiction of the Ecumenical Patriarchate.

At present, there are 38 people living in this “double monastery,” drawn from 13 or 14 nations, so this is still, in the words of Sister Thecla, “a melting pot.” 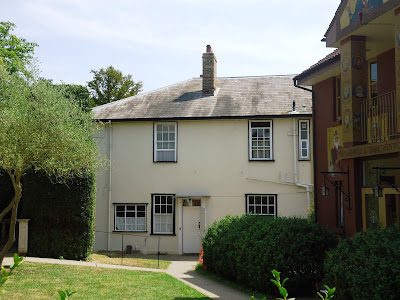 The Old Rectory and monastic buildings at the Monastery of Saint John the Baptist in Tolleshunt Knights (Photograph: Patrick Comerford, 2013)

She explained that the typikon of the monastery consists of the Athonite practice of repetition of the Jesus Prayer for about four hours a day and the Divine Liturgy three or four times a week, using English, Russian, Greek, French and sometimes other languages. Today, the majority of the community are nuns, with a smaller number of monks. The Abbot is Archimandrite Kyril.

We joined the community for the Divine Liturgy this morning, and after breakfast, we were brought on a tour of the monastery by Sister Tecla. In the original chapel that was formed in the Old Rectory by Elder Sophrony, she told us the story of the monastery and its foundation by Elder Sophrony after he left Mount Athos, where he had been a disciple of Saint Silouan the Athonite.

After leaving Mount Athos in the aftermath of World War II and the Greek Civil War, he moved back to Paris, where he had lived in his youth. There he was a chaplain at a Russian old people’s home. This work led to the formation of a small community that centred its prayer life on the Jesus Prayer.

In 1958, Elder Sophrony and his six followers moved to England. They bought the Old Rectory at Tolleshunt Knights, and the new Community of Saint John the Baptist was formed in 1959.

A problem emerged when the monastery was told that the only way that it could bury its members on the farm was to build an underground crypt. Elder Sophrony said he would not repose until the crypt was ready. Then, having been told of the expected completion date of 12 July 1993, he said he “would be ready.”

Twenty years ago this month, on 11 July 1993, Elder Sophrony died. He was buried in the crypt on 14 July. Mother Elizabeth, the eldest nun, died soon after on 24 July. 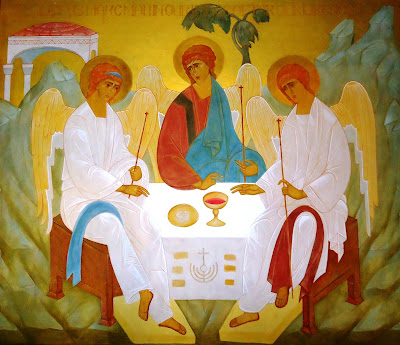 The Visitation of Abraham ... a fresco on a wall in the Monastery of Saint John the Baptist in Tolleshunt Knights (Photograph: Patrick Comerford, 2013)

After showing us the Funerary Chapel, our programme continued with a lecture by Sister Magdalen, who is known throughout the Orthodox world for her work with children and for her books, including Conversations with Children: Communicating our Faith and Children in the Church Today.

Sister Magdalen, who was speaking to this year’s conference theme of Angels, told us time and again: “It is better to see your sins than to see an angel.”

She expressed her worries about New Age and occult interests in angels. Angels and humans are both creatures of God. But she said the incarnation makes a radical difference, for Christ came not as an angel but became human – a child born in flesh into a poor family.

She offered the opinion that angels are in awe when humans can take part in the Body and Blood of their Lord sacramentally. We should all become bearers of Christ, for the Church is the Body of Christ, who is the creator of angels.

After the Ascension, Christ is seated at the right hand of the Father within his human body. 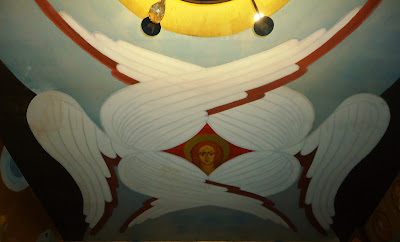 A six-winged seraph in a fresco on a ceiling in the Monastery of Saint John the Baptist in Tolleshunt Knights (Photograph: Patrick Comerford, 2013)

Angels love and serve human beings, and rejoice at our repentance, but humans can live and develop, learn by love to embrace all humanity so that we sanctify the whole of creation in ourselves.

When asked whether angels suffer, she said: “I think love always suffers.” But she added once again: “It’s more important to see your sins than to see an angel ... You don’t have to see an angel to be a great saint.” 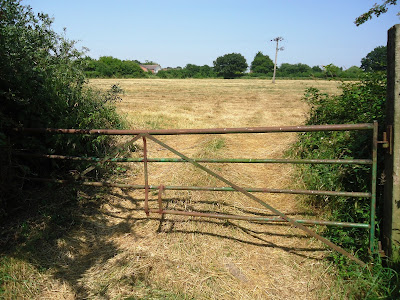 An afternoon spent partly walking and contemplating in fields of green and gold in the Essex countryside (Photograph: Patrick Comerford, 2013)

After lunch in the monastery and some time in the bookshop, I spent the best part of an hour on my own, strolling and contemplating at one and the same time through the leafy lanes, the public footpaths and the fields of green and gold in surrounding countryside and in and out of the tiny village of Tolleshunt Knights.

Because of the early start, I had slept on the coach for most of the journey this morning. The journey back to Sidney Sussex College, Cambridge, was a delight, passing through wide expanses of open countryside in Essex and Cambridgeshire, and through Tolleshunt Knights; the jam-making Tiptree, with Saint Luke’s Church; Inworh, with All Saints’ Church; Feering, with the Sun Inn, the Railway Tavern and fields of lavender and mixed poppies; Coggeshall, with a dog in the river, its timber-framed houses, and its debates about whether it is a hamlet or village, while its football team insists it is a town; and Bradwell – the one with the Swan Inn and Blackwater Mill, and miles away from Bradwell with the nuclear reactor that can be seen from the monastery farm.

We by-passed Braintree on the A120 to join the M11, by-passing Newport and Saffron Walden. We were back in Cambridge in time for dinner in the Hall in Sidney Sussex College. 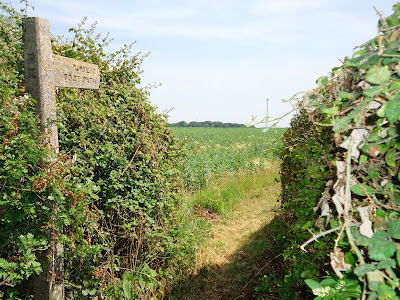 Enjoying the footpaths and country lanes of Essex in the summer sunshine (Photograph: Patrick Comerford, 2013) 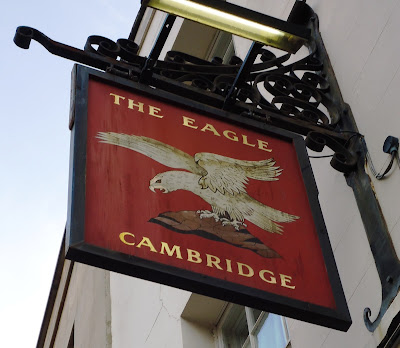 The sign of The Eagle in Bene’t Street – close to Saint Bene’t’s Church and Corpus Christi College (Photograph: Patrick Comerford, 2013)

This year, Cambridge is celebrating the sixtieth anniversary of the discovery of the “secret of life.”

Sixty years ago, on 28 February 1953, Francis Crick interrupted the patrons in the Eagle on Bene’t Street to announce that he and James Watson had “discovered the secret of life.”

At the time, the Eagle was a popular lunchtime venue for people working in Cambridge University’s Cavendish Laboratory at its old site nearby in Free School Lane.

Last night [16 July 2013], a small group of us who are taking part in the IOCS Summer School in Cambridge, adjourned to the Eagle, although I cannot imagine that there was one scientist among us. 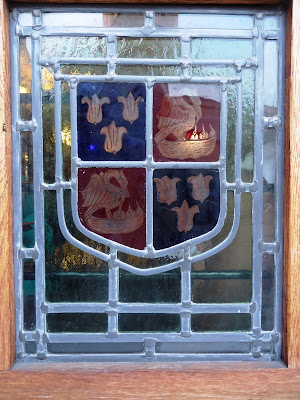 The emblem of Corpus Christ College in a window in the Eagle (Photograph: Patrick Comerford, 2013)

The Eagle, which is one of the largest best-known pubs in Cambridge, is on the north side of Bene’t Street, across the street from Saint Bene’t’s Church. Although the pub is managed by Greene King, the site is owned by Corpus Christi College, and the heraldic emblem of the college can be seen in the glass in the windows of the Eagle.

This is one the oldest pubs in Cambridge, and claims to date back to the 14th century. The site was bequeathed to Corpus Christi College in 1525. However, the first record I can find is in 1667, when it was known as ‘The Eagle and Child.’

It seems that this was originally a coaching inn. The Rutland Club, founded in 1728 by John Mortlock, was based in the Eagle in the 18th century. 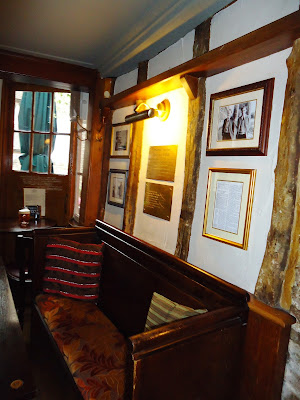 The corner in the Eagle where James Watson and Francis Crick announced their discovery sixty years ago (Photograph: Patrick Comerford, 2013)

When Cambridge University’s Cavendish Laboratory was still at its old site nearby in Free School Lane, the Eagle was a popular place for lunch for the laboratory staff.

And so, this became the place where Francis Crick interrupted the patrons at lunchtime on 28 February 1953 to announce that he and James Watson had “discovered the secret of life” after they had come up with their proposal for the structure of DNA or, if you can pronounce or spell it, Deoxyribonucleic Acid. 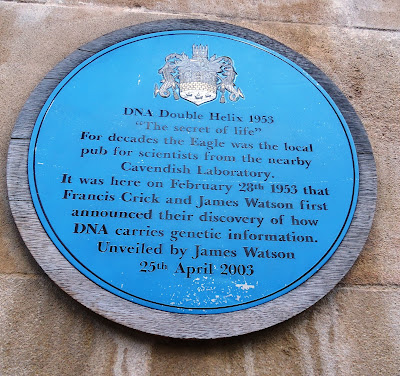 James Watson recalls the story in his The Double Helix. He says Crick “winged into the Eagle” and somewhat prematurely told “everyone within hearing distance that we had discovered the meaning of life.” Crick, in his own account in What Mad Pursuit (1988), says he has no recollection of this. Crick and Watson shared the Nobel Prize with Maurice Wilkins in 1962 – the collaborative role of Rosalind Franklin went unacknowledged for a long time.

The story of the lunchtime announcement sixty years ago is commemorated on a blue plaque at the entrance to the pub unveiled ten years ago by James Watson ten years ago on 25 April 2003. 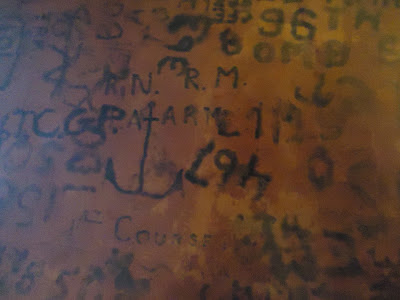 The ceiling of the ‘RAF Bar’ in the Eagle l(Photograph: Patrick Comerford, 2013)

Behind the room where Watson and Crick shared a drink or two, we also had a look at the back bar with its RAF ceiling.

During World War II, the Eagle was popular venue forith RAF airmen and US air crews who were stationed at airfields close to Camridge. They left their mark in graffiti on the ceiling of this bar, scorching their names and squadron numbers with candle smoke and cigarette lighters or writing with lipstick.

A major restoration of the Eagle was carried out by Corpus Christi and Greene King in 1988, and the Eagle reopened as it now is in 1992.

Of course, discoveries are not just made in seminar rooms or laboratories. Over the years many a scientific theory, literary argument, advance in medicine – or even a theological theory, as I have discovered, year-after-year at the Institute of Orthodox Christian Studies – has been debated in the Eagle and other similar pubs in Cambridge.