Two pitchers of Pimm’s to mark the end of summer 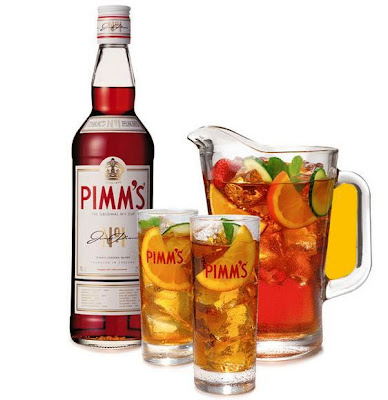 A pitcher of Pimm’s to mark the end of summer

A pitcher of Pimm’s evokes wonderful images of lingering summer afternoons in England ... lazing by Mag’s Bridge; watching the punts; cricket in Lichfield; garden parties in Cambridge college courts; sitting at the grass waiting for an open-air theatre or opera production, tennis, Henley ... It’s the drink for English garden parties and picnics.

There is something English about Pimm’s that means it can never be replaced by champagne.

And so, my contribution to a local street party marking the end of summer was two pitchers of Pimm’s.

Originally, there were six different types of Pimm’s:

Pimm’s No 1 is based on gin and can be served on ice or in cocktails. It has a dark tea colour with a reddish tint, and tastes subtly of spice and citrus. It is often taken with English-style, clear and carbonated lemonade, with chopped fresh ingredients, particularly apples, cucumbers, oranges, lemons, limes, strawberries and bruised mint.

Pimm’s No 2 was based on Scotch whisky.

Pimm’s No 3 is based on brandy.

Pimm’s No 5 was based on rye whiskey.

Pimm’s No 6 is based on vodka.

Only Pimm’s 1, 3 and 6 are now available. But this evening’s pitchers were made with Pimm’s No 1, which is the true and original version.

Pimm’s was first produced in 1823 by James Pimm, the owner of an oyster bar in the City of London, where he offered a gin-based drink made from quinine and a secret mixture of herbs as an aid to digestion. The spices were intended to soften the hard edge of the gin. He served this drink in a small tankard known as a “No 1 Cup,” which gave the drink its lasting name.

Large-scale production began in 1851, the distillery began selling it commercially in 1859, and over the next century the range was expanded. 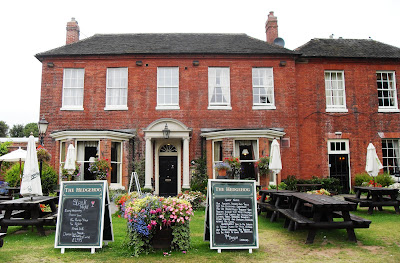 The Hedgehog in Lichfield ... where they taught me how to mix Pimm’s this summer (Photograph: Patrick Comerford, 2011)

How do you serve Pimm’s? After many summers of enjoying it, I was taught how to mix Pimm’s in the Hedgehog in Lichfield this summer.

Take a large pitcher and loads of ice. Mix one par tof Pimm’s No 1 to three parts of chilled lemonade, and add generous and copious amounts of bruised mint, sliced cucumber, orange, lemon, lime and apple and chopped strawberry. Thin slices help the flavours come out, and the bruised leaves impart a stronger mint flavour. Allow the drink to sit in the pitchers for half an hour or so, so the flavours are able to really burst out.

But I suppose everyone has his or her own recipe, and you just have to accept that every pitcher is going to be different – either subtly different, or wildly so. More mint or less lemon is going to affect the taste in quite an obvious way. 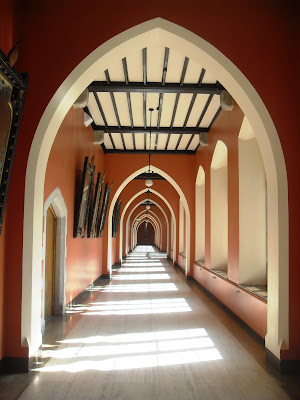 Pugin’s corridors and cloisters in Maynooth rival those in any Cambridge or Oxford college (Photograph: Patrick Comerford, 2011)

In Rose Macaulay’s The Towers of Trebizond, Laurie takes a look at Aunt Dot’s things to see what she has taken with her ‘Her miscellaneous collection of medicine bottles was here; it was a largish collection, because she did not know what most of them were, or for what complaints, on account of chemists not caring to say more on the labels than “The Pills”, “The Tablets”, “The Mixture”, and other non-committal titles, so aunt Dot took a great many of these anonymous bottles around with her on her travels and ate and drank them at random when she ailed.”

My kitchen table must look like it contains Aunt Dot’s whole collection at the moment.

The pain from back and shoulder running down into my arm, and sometimes into my fingers is so constant and severe enough to interrupt my sleep each night. I hate being cranky and truculent, and I went back to my GP on Thursday evening. The result was new prescriptions, increased courses of steroids, more pain killers, and what he hopes is a short-sharp, quick treatment.

There are no bruises, my heart is fine, and so my real suspicion is that this pain is related to my sarcoidosis. As if I need this as we face into a round of ordinations and the beginning of the new academic year.

As I said last week, distraction is almost as good as a cure, and so I returned to my research on AWN Pugin on Friday afternoon, and went to Maynooth to photograph some more of his work.

Unfortunately, by then time I arrived the Pugin hall was closed, and so, after some time strolling around and photographing the Pugin cloisters and squares and JJ McCarthy’s overpowering chapel, I decided to visit Maynooth Castle, outside the college gates. 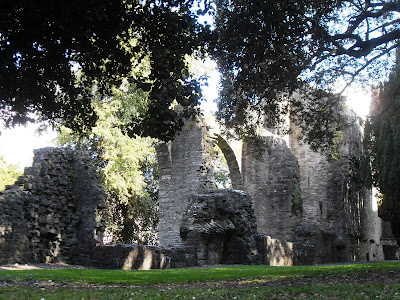 The ruins of Maynooth Castle ... abandoned by the FitzGerald family in 1656 (Photograph: Patrick Comerford, 2011)

Maynooth Castle was built around 1200 and for centuries was the principal stronghold of the FitzGeralds, Earls of Kildare and later Dukes of Leinster, once the most important ruling family in Ireland.

During the rebellion of ‘Silken’ Thomas FitzGerald, the strongly-fortified castle was bombarded by Sir William Skeffington in March 1535, and fell after a ten-day siege. In 1629, Richard Boyle, Earl of Cork, restored and remodelled the castle, but the final blow was dealt to the castle when Owen Roe O’Neill seized and dismantled it in 1647.

The FitzGerald family finally abandoned the castle at the death of Boyle’s son-in-law, George FitzGerald, 16th Earl of FitzGerald, in 1656. In the early 18th century, Robert FitzGerald, 19th Earl of Kildare, briefly explored the possibility of restoring the castle, but eventually accepted that it was too dilapidated and built a new residence at Carton, east of Maynooth. His son, Lord Edward FitzGerald, was one of the leaders of the 1798 Revolution.

Partial restoration of the castle began in February 2000. The keep is open to the public, and the castle and its grounds are conserved and managed by the Office of Public Works. 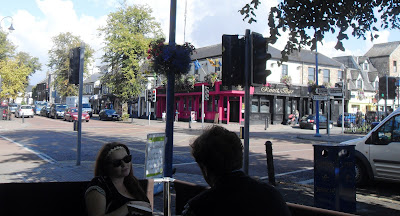 Sitting in the late afternoon sunshine, enjoying a double espresso at the corner of the Main Street, I appreciated the beauty of Maynooth as a small university town. I was a student here for some years, and Maynooth has befitted in recent years from being bypassed by the motorway.

I went on up to the Manor Mills Shopping Centre to look at the surviving old mill wheel from the 19th-century Kavanagh’s Manor Mills. The old mill dates back to the FitzGerald’s Manor Mills in the 13th century and the 21st century shopping centre provides a beautiful view back over the river to the castle and its grounds, with thr spire of McCarthy’s college chapel in the distance. 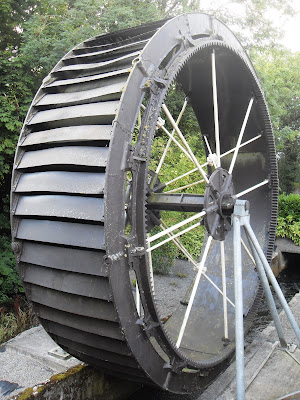 Later in the evening, I had dinner with two friends who have returned home after working for a month in an orphanage in Ethiopia. Their stories put my own pain in perspective. And I’m still determined that even though I have sarcoidosis, sarcoidosis is not going have me.

Posted by Patrick Comerford at 12:02 No comments: