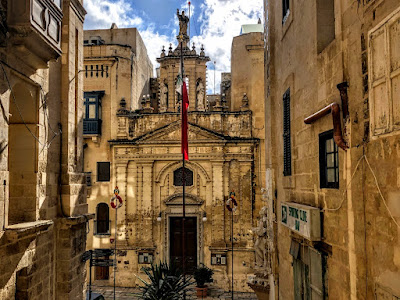 The Church of Saint Lucy on East Street, Valletta, was built in 1570 (Photograph: Patrick Comerford, 2022)

I am in Valetta this week, and it seems as though every street – or every second street – inside the walls of the capital of Malta, is named after a saint. But as I continue my explorations of Valletta today, and before this day begins, I am taking some time early this morning for prayer, reflection and reading.

The Church of Saint Lucy on East Street, Valletta, was built in 1570 and its treasures include a painting of Saint Lucy above the high altar and the corpse of Saint Lucian the Martyr.

Saint Lucia of Syracuse (283-382) or Saint Lucy, was a martyr who was executed in Sicily during the persecution of Diocletian. She is one of eight women, including the Virgin Mary, explicitly named in the Catholic Canon of the Mass. Her traditional feast day, Saint Lucy’s Day, is on 13 December.

Saint Lucia of Syracuse was honoured in the Middle Ages and remained a well-known saint in early modern England. The oldest record of her story comes from the fifth-century Acts of the Martyrs. All accounts agree that a disappointed suitor accused Lucy of being a Christian, and she was executed in Syracuse in the year 304 during the reign of Diocletian.

Her veneration spread to Rome, and by the sixth century to the whole Church. The oldest archaeological evidence comes from the Greek inscriptions from the Catacombs of Saint John in Syracuse. In mediaeval accounts, her eyes were gouged out before her execution.

The Church of Saint Lucy was built in 1570, four years after the construction of the city of Valletta began. It was originally dedicated to Saint Francis of Paola, a statue of whom is on the corner of Saint Lucy’s Street opposite the church.

The first Dominicans who arrived in Valletta from Birgu first administered the sacraments from this church before their own church was built. The church was rebuilt with money paid by the wine merchants of Valletta. After the church was rebuilt, it was dedicated to Saint Lucy and Saint Vincent Ferrer.

The painting above the high altar depicts the Immaculate Conception with Saint Paul, Saint Lucy, Saint Vincent Ferrer and Saint Clare. Beneath the high altar is the body of Saint Lucian the Martyr, brought from the cemetery of Priscilla in Rome. The side altars are dedicated to Saint Francis of Paola and Saint Paschal Baylon.

The feast of Saint Lucy is celebrated in Malta every year from 1 December and ends on the liturgical feast of the saint on 13 December. She is the patron of the blind, of Syracuse and Perugia in Italy and of Mtarfa in Malta.

7 Jesus departed with his disciples to the lake, and a great multitude from Galilee followed him; 8 hearing all that he was doing, they came to him in great numbers from Judea, Jerusalem, Idumea, beyond the Jordan, and the region around Tyre and Sidon. 9 He told his disciples to have a boat ready for him because of the crowd, so that they would not crush him; 10 for he had cured many, so that all who had diseases pressed upon him to touch him. 11 Whenever the unclean spirits saw him, they fell down before him and shouted, ‘You are the Son of God!’ 12 But he sternly ordered them not to make him known.

The Prayer in the USPG Prayer Diary today (20 January 2022) invites us to pray in these words:

We pray for the work of Saint Andrew’s Theological College, the Church of Bangladesh’s theological training centre. May they continue to nurture and educate prospective clergy. 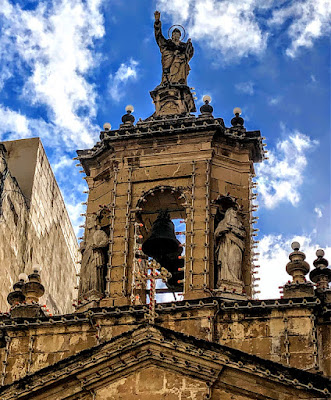 The Church of Saint Lucy was originally dedicated to Saint Francis of Paola (Photograph: Patrick Comerford, 2022)