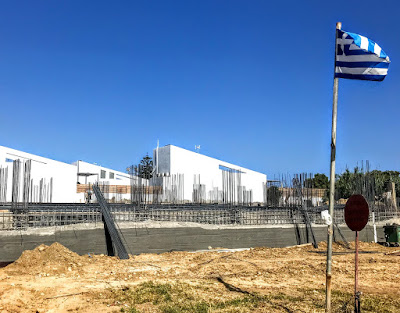 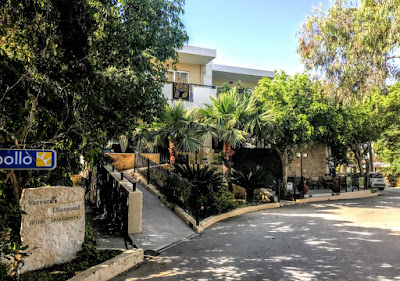 The Varvaras Diamond Hotel is in a quiet corner of Platanes, 5 km east of Rethymnon (Photograph: Patrick Comerford, 2018)

I am back in Crete this morning for a two-week holiday on this Greek island.

This is my second time in Greece this year, having spent Orthodox Easter in Thessaloniki in April, and my fourth time in Greece in the space of 12 months.

I am back in Platanes, a suburban and resort area about 5 km east of Rethymnon, and I am staying for the next week in the Varvaras Diamond Hotel.

I first came to Rethymnon 30 years ago in 1988 and have been staying in this part of Rethymnon for the past four years.

The Varvaras Diamond Hotel is set in a quiet corner on a leafy, flower-filled street that leads to the beach. I am close to restaurants, tavernas and shops, yet in a quiet, laid-back area.

I arrived late last night [6 June 2018] in Chania on a Ryanair flight from Dublin. Although the flight was delayed by more than an hour, but the 4½-hour flight and the one-hour, 65 km transfer to Rethymnon seemed shorter than my six-hour epic journey by public transport from Askeaton in Co Limerick to Knocklyon in Dublin on Wednesday last week.

The Varvaras Diamond Hotel, a family-run hotel owned by the Kantartzis family, was built in 2001 and is surrounded by evergreen trees and gardens with palm trees, colourful plants and flowers. From my balcony this morning, I am looking at lemon trees with the fruits in full bloom.

I am here for a week before moving on to Georgioupolis, between Rethymnon and Chania, next week.

During this fortnight, I hope to spend some time in a monastery, to visit icon workshops, browse in bookshops, swim in the Mediterranean, ramble around archaeological sites, seek out churches and buildings of architectural and historical interest, look for old mosques, synagogues, hanging balconies and fountains in the former Muslim and Jewish quarters of these cities, to get lost in the back streets of Rethymnon and Chania, to read poetry, novels, history and newspapers, and to enjoy long lazy lunches in the sun and dinners in the sunset.

I am about to head off to breakfast. But join me over the next two weeks as I reacquaint myself with places I have come to know so well but also explore new corners of Greece, try to get up to speed with Greek politics and even brush up on my rusty and limited knowledge of the Greek language. 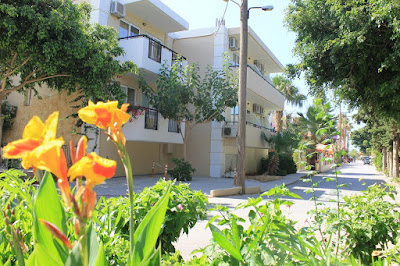 The Varvaras Diamond Hotel is surrounded by trees and gardens