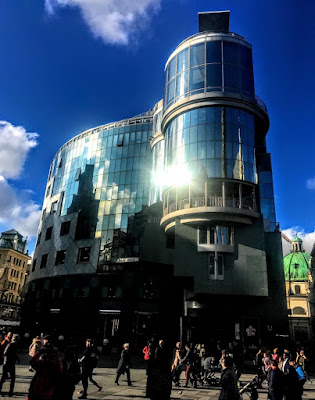 A first-time visit to
the Greek Orthodox
cathedral in Vienna 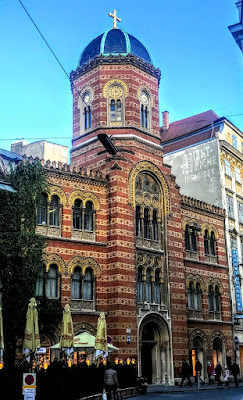 I was in Vienna for just a few hours on Thursday [7 November 2019], catching a bus from Bratislava with the intention of visiting the Jewish quarter and a number of Jewish centres, including the Jewish Museums at Dorotheergrasse the Judenplatz, the city’s last surviving synagogue on Seitenstettengrasse, the Holocaust Memorial in the Judenplatz, and the site of mediaeval ghetto.

I also wanted to use this opportunity to revisit the Stephansdom or Saint Stephen’s Cathedral after 14 years, as well as a number of churches and buildings, including Peterskirche and the Haas-Haus.

But for the first-time ever – and this was my fifth visit to Vienna – I also visited Holy Trinity Greek Orthodox Cathedral in the historic Greek neighbourhood in Vienna’s Innere Stadt or old town.

The area has also been known as the Fleischmarkt, for this was the city of the city’s first meat market from 1220. Greek merchants first settled around the Fleischmarkt in the early 18th century, and there have been Greek Orthodox churches on this site since 1787, following the Patent of Toleration issued by the Emperor Joseph II in 1781. 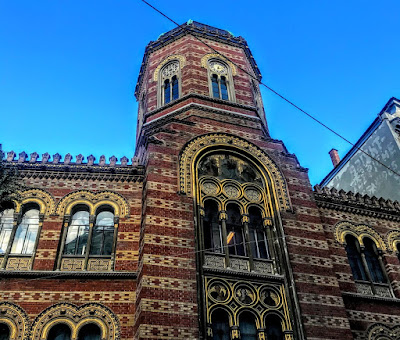 The Griechische Kirche or Greek Church was designed by the Danish-born architect Theophil Hansen in the Byzantine Revival style (Photograph: Patrick Comerford, 2019)

The neo-Byzantine style Griechische Kirche or Greek Church, with its rich, gilt structure, was designed by the Danish-born architect Theophil Hansen (1813-1891) in the Byzantine Revival style.

The cathedral was officially opened on 21 December 1858. The exterior features two-tone brickwork and gilded archways. The elaborately ornamented sanctuary shows a stylish allusion to Baroque church architecture that is typical of southern Germany and Austria.

A number of frescoes for the facade and vestibule were commissioned from the Austrian painter and art professor Carl Rahl, with other frescoes by Ludwig Thiersch.

Baron Theophil Edvard von Hansen was born Theophilus Hansen in Copenhagen on 13 July 1813, and later became an Austrian citizen. He is known particularly for his buildings in Athens and Vienna and is an outstanding representative of neoclassicism.

After training with the Prussian architect Karl Friedrich Schinkel and studying in Vienna for some years, he moved to Athens in 1837, where he studied architecture and design, with particular interest in Byzantine architecture.

In Athens, Hansen designed his first building, the National Observatory of Athens, and two of the three neighbouring buildings forming the so-called ‘classical trilogy’: the Academy of Athens and the National Library of Greece, alongside the National and Cappodistrian University of Athens, designed by his brother Christian Hansen. 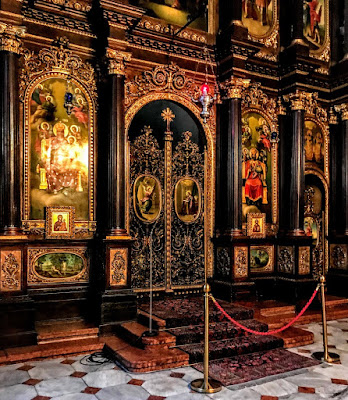 There have been Greek Orthodox churches on the site of the cathedral since 1787 (Photograph: Patrick Comerford, 2019)

The Greek-Austrian financier Georgios Sinas called Hansen back to Vienna in 1846. There Hansen took up an apprenticeship with noted Austrian architect Ludwig Förster.

In his early works, such as the museum at the Arsenal in Vienna, Hansen still displayed a more romantic style. In later years, he became the most outstanding representative of Renaissance-inspired historicism or the Neo-Renaissance style, which also came to be known as Viennese-style. This style extended into the smallest details of the interior design and partially accepted the courses of a synthesis of the arts.

Hansen became one of the most influential architects of the Viennese Ringstrasse. His best-known work is the Austrian Parliament building, designed in the style of an ancient, neo-classic temple and a reference to the Greek beginnings of democracy.

Hansen was originally a staunch critic of the Classical style that was taught to him at the Copenhagen Academy. Over the years, however, he came to incorporate Classical elements into his forms.

Hansen’s Musikverein in Vienna is one of the most notable concert halls in the world. Its design and acoustics are often admired and copied in music houses.

Hansen worked with Austrian sculptor Vincenz Pilz and artist Carl Rahl, as well as the architect Otto Wagner. The Emperor Franz Joseph honoured Hansen in 1884 with a title in the Austrian nobility as Freiherr or Baron von Hansen. He died in Vienna on 17 February 1891. 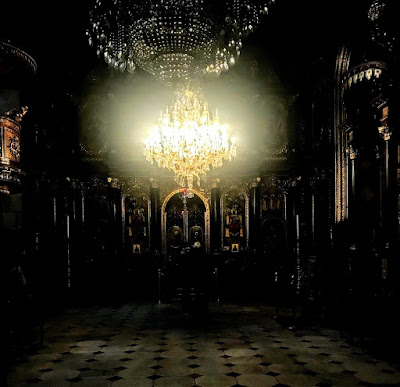 Hansen’s Greek cathedral in Vienna was financed by the Greek-Austrian diplomat and philanthropist Simon Sinas (1810-1876), and this was one of their many collaborations in Vienna and Athens.

Simon Sinas (Σίμων Σίνας), or Simon von Sina, was an Austrian banker, aristocrat, benefactor and diplomat of Greek descent. He was born in Vienna on 15 August 1810, but his family were Greeks who came originally from Moscopole in what is south Albania today.

He was the Greek consul in Vienna, and later the Greek minister to Austria, Bavaria and Germany. His father, Georgios Sinas, was also a benefactor and diplomat, and Simon Sinas expanded his father’s business.

Simon Sinas made major donations to educational and scientific foundations in Austria, Hungary and Greece. While he was the Greek Ambassador in Vienna, he hosted the ‘Greek Ball’ in the Palais Sina for which Johann Strauss II composed the Hellenen-Polka (Hellenes Polka).

Sinas became director of Austria’s central bank, Oesterreichische Nationalbank, and established the Simon Georg Sina banking house in Vienna. After the Second Schleswig War or German-Danish War came to an end in 1864, Sinas funded the return of Austrian forces from Schleswig-Holstein. Sinas held a seat in the Herrenhaus or upper house in the of Austrian parliament from 1874.

Along with Holy Trinity Greek Orthodox Church in Vienna, Sinas was the donor or financed many public buildings, including the Hungarian Academy of Budapest, the Athens Orthodox Cathedral and the Athens Academy, and others. He died in Vienna on 15 April 1876. 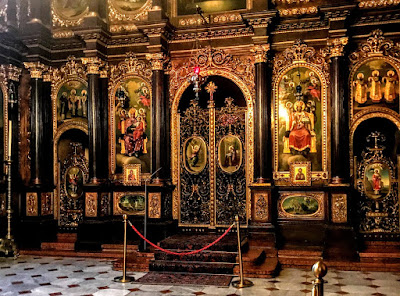 The parishioners of the Greek Cathedral in Vienna have included the family of the conductor Herbert von Karajan (Photograph: Patrick Comerford, 2019)

In the past, the parishioners of the Greek Cathedral in Vienna have included the family of the conductor Herbert von Karajan (1908-1989). They were descended from Georg Karajan (Geórgios Karajánnis, Γεώργιος Καραγιάννης), was born in Kozani, in the Ottoman province of Rumelia, now in Greece.

The cathedral has been the seat of the Greek Orthodox Metropolis of Austria since 1963, and is part of the Ecumenical Patriarchate of Constantinople.

Beside the cathedral, the Griechenbeisl is one of other landmarks associated with the Greek community in Vienna. It was once frequented by Beethoven, Brahms and Schubert. A passage links the Griechenbeisl to Griechengasse or ‘Greek Street,’ with its own Greek restaurant, Artemis. 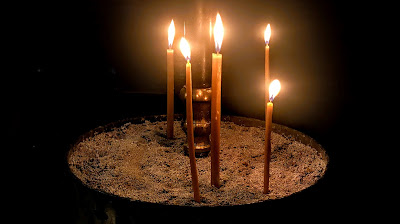