Where are you from? That depends
on where I am and who is asking

Walking around the boating lake at Farmleigh House on Saturday afternoon (Photograph: Patrick Comerford, 2016; click on images for full-screen resolution)

Where are you from?

Ask someone in England where she is from, and she is probably going to name their town or city where she works, or the suburb where she has lived for the last seven or eight years.

The English population is socially more fluid when it comes to identifying with place. It sometimes causes a sense of dislocation. There is never the same pride in identity that is displayed in the support for country teams in GAA competitions in Ireland. You are not going to see English 20-somethings wearing the country colours of the Warwickshire or Surrey cricket teams in the way their Irish equivalents were a Kilkenny or Tipperary hurling shirt, and people can wear Manchester United or Arsenal shirts without ever having travelled, in the first instance, further north than the Watford Gap, or in the second case, without ever crossing the river.

In Ireland, ask someone where he is from, and the answer can tell you who they want to win the next All-Ireland hurling or football final rather than where they were born.

I was born on Rathfarnham Road in Dublin, and have a passing interest in hurling – my main sporting interests are rugby, cricket and having television seats for soccer matches. But I was disappointed on Sunday afternoon that Wexford is not going to reach the All-Ireland hurling semi-finals.

I spent part of my childhood on my grandmother’s farm in Co Waterford, but I was still hoping that the newly-successful Wexford county side would get through at Semple Stadium on Sunday afternoon.

My parents first lived in Bray after they got married, but I never felt I was from there either. When I was still a young adult I went to live in Wexford and to work for the Wexford People. My father’s family was from Wexford, I felt at home instantly, and that feeling has never left me.

I have also felt at home in Lichfield throughout my life, because of early experiences there while I was still in my teens. I imagine being able walk around the streets of Lichfield or Wexford in the dark and blindfolded and still knowing with confidence where I am and why I like that particular street or square.

But this Sunday afternoon I was feeling a little homesick for Greece after a three-week holiday in Rethymnon. 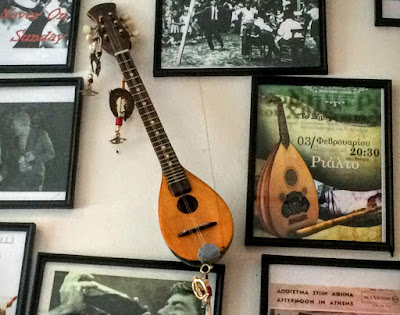 After the Cathedral Eucharist, I might have gone home early to watch the Wexford v Waterford hurling quarter-final. The expected crowds at the air show in Bray certainly ruled out going for an afternoon walk on the beach in Bray. But instead, four of us went to lunch in Corfu, the Greek restaurant on Parliament Street, just a 300 metre stroll from Christ Church Cathedral.

There was good Greek food, Greek music in the background, and good conversations that stretched well into the mid-afternoon.

Coming back to Dublin after three weeks in Greece means not just settling back into a work routine – and there were two full days at work on Thursday and Friday – but also thinking through how to spend time for recreation and reflection at the weekend. 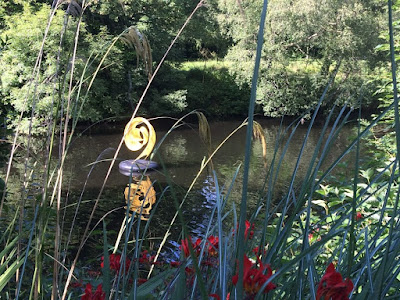 Summer colours in the lake by the Boathouse Café at Farmleigh House in the Phoenix Park (Photograph: Patrick Comerford, 2016)

On Saturday afternoon, instead of going for a beach walk, two of us went to the state guest at Farmleigh House in the Phoenix Park, for lunch in the Boathouse Café and walks around the boating lake and in the walled garden.

The Lakeside Walk circles this three-acre lake with its picturesque island. This walk offers views of bird life, a variety of trees and masses of water lilies.

When the Guinness family lived at Farmeligh House, they used the lake for boating, and they had a boathouse where the café now stands on the edge of the lake. The trees on the boathouse lawn include mature conifers such as cedars and Wellingtonia, as well as cherry trees and Japanese maples.

From there we walked along the Magnolia walk to the Walled Garden, with its cantilevered glasshouse and its rich variety of summer flowers in bright, glowing colours.

It is only in recent years that I have started to appreciate the beauty of the Phoenix Park, and how we are blessed living in Dublin to have such accessible open tracts of land in the heart of a European capital city.

As we left, we stopped to watch the deer herd, which is part of the scenery and landscape of the Phoenix Park.

These animals move around in large numbers and are not afraid of the people who come to see them and try to hand-feed them so that their children can be photographed with Bambi or Rudolph. But they maintain their proud independence, and can stubbornly move on when they have had enough human intrusion for one afternoon.

Fallow deer have been present in the Phoenix Park since the 17th century when they were hunted for sport. The present-day herd is descended from those deer who were chased for enjoyment and hunted for food. They are wild animals, and their relationship with humanity has sometimes been a stormy one, surviving moves to cull them dramatically during World War II and facing down calls to remove them to a special enclosure so 20th-century motorists could drive through the park.

The Phoenix Park – not Santa’s mythical North Pole – is their home, and the people of Dublin who come to see them are merely passing visitors. 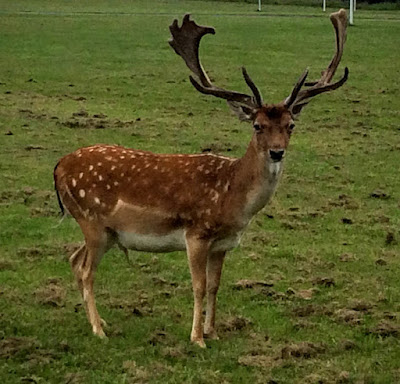 Fallow deer in the Phoenix Park at the weekend (Photograph: Patrick Comerford, 2016)