Poems for Lent (38): ‘Sonnet written in Holy Week at Genoa,’ by Oscar Wilde 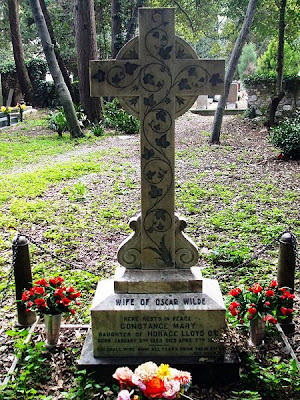 The grave of Constance Lloyd Wilde in Genoa, visited by Oscar Wilde a year before his death

My choice of a Poem for Lent on this Monday in Holy Week is ‘Sonnet written in Holy Week at Genoa,’ by the Dublin-born Irish playwright and poet Oscar Wilde (1854-1900).

Oscar Fingal O’Flahertie Wills Wilde was born on 16 October 1854 in 21 Westland Row, Dublin, the son of Sir William Wilde and his wife, Jane Francesca (Elgee), whose grandfather was Archdeacon of Ferns and Rector of Wexford. She wrote poetry under the pseudonym Speranza (the Italian for “Hope”), while her husband was Ireland’s leading ear and eye surgeon of the day.

Oscar Wilde was educated at Portora, Trinity College Dublin, and Magdalen College Oxford. On the walls of his rooms at Oxford in the 1870s, he hung pictures of Cardinal Manning and Pope Pius IX, and The Imitation of Christ Thomas à Kempis was his nightly reading.

In 1877, Wilde travelled to Greece with the Revd Sir John Pentland Mahaffy, his former tutor in Trinity College Dublin. On his return through Italy, Wilde had a private audience with Pope Pius IX in Rome. Afterwards, Wilde locked himself in his room, emerging only after writing a sonnet inspired by and dedicated to the Pope. But hours later, he visited the Protestant Cemetery in Rome where the Romantic poet, John Keats, was buried. Kneeling at his grave, Wilde ostentatiously declared it to be “the holiest place in Rome.”

Oscar Wilde was sentenced to two years in jail in 1895. After his release from prison in May 1897, injured and in poor health, his first act on his release was to write to the Jesuits of Farm Street, London, begging to make a six-month retreat at their house. His request was refused and Wilde then fled across the Channel to France to be reunited with his lover, Lord Alfred Douglas. He wrote to his wife, Constance, but he saw neither her, nor their two young sons, again.

In 1899, the exiled Wilde, travelled throughout Europe. He was in Rome with his companion Robbie Ross briefly in 1900. There they attended Masses and papal audiences, and Wilde received a blessing from Leo XIII that he thought had a physically curative effect on him, and he joked to Ross that he was “a violent Papist.”

By then, his health was deteriorating and he was drinking to excess. Wilde left Rome for Paris, and there, on 28 November 1900, as Wilde lay dying on his bed, Robbie Ross called in a Roman Catholic priest, an Irish-born English Passionist, Father Cuthbert Dunne (1869-1950). Wilde received conditional Baptism and was anointed. For a short time he emerged from delirium into lucidity, and Father Dunne was satisfied that Wilde had freely desired reception into the Roman Catholic Church.

The poet who had once been one of the best-known personalities of his day died destitute in Paris on 30 November 1900 at the age of 46.

Today’s poem, ‘Sonnet written in Holy Week at Genoa,’ is technically an iambic pentameter, it but follows a strict rhyming pattern that has more in common with what is called the Italian sonnet, possibly adopted by Wilde because he was writing in Genoa.

The poem was published in 1881 on Wilde’s return to England, but he probably wrote it in Genoa, where Wilde may have attended the Chiesa Anglicana or Anglican Church.

... those dear Hellenic hours
Had drowned all memory of Thy bitter pain,
The Cross, the Crown, the Soldiers, and the Spear.

The sonnet opens with the poet in Scoglietto, the park around Villa Rosazza, near the Di Negro Metro Station. The oranges hanging from the trees are a common feature of Genoa in Via Negro as elsewhere. The imagery here is powerful with the oranges as lamps their brightness shaming the day. The flower blossoms, disturbed by the birds fluttering, fall as snow, an unusual but not uncommon feature of the climate in Genoa.

The sweetness of life in Genoa is underlined with the imagery of the sea and the narcissi and contrasted by the announcement of the death of Christ by the boy-priest, an image that reminds us not only of Wilde’s infatuation with Roman Catholicism but possibly of his troubled sexuality too.

The snows of the fifth line become flowers again to fill the sepulchre, a common practice in Italy and Greece as Christians decorate the churches for Easter.

The Hellenic hours could have various meanings, both to Wilde’s own sexuality but also the Graeco-Roman history of Christianity.

The last line is a kind of poetic shorthand summoning up aspects of the Crucifixion that are part of the common Christian memory.

Seventeen years after this poem was published, Oscar Wilde’s wife, Constance Lloyd, died in Genoa in 1898 and was buried in the Staglieno Cemetery. A year later, he visited her grave in Genoa on 26 February 1899 – a poignant and little-known episode in his life – and spent some more time in Genoa just a year before his own death. 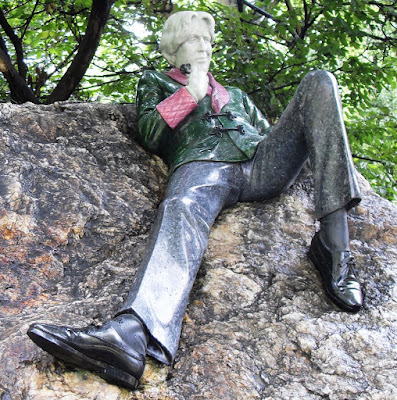 Sonnet written in Holy Week at Genoa, by Oscar Wilde

I wandered in Scoglietto’s green retreat,
The oranges on each o’erhanging spray
Burned as bright lamps of gold to shame the day;
Some startled bird with fluttering wings and fleet
Made snow of all the blossoms, at my feet
Like silver moons the pale narcissi lay:
And the curved waves that streaked the sapphire bay
Laughed i’ the sun, and life seemed very sweet.
Outside the young boy-priest passed singing clear,
“Jesus the Son of Mary has been slain,
O come and fill his sepulchre with flowers.”
Ah, God! Ah, God! those dear Hellenic hours
Had drowned all memory of Thy bitter pain,
The Cross, the Crown, the Soldiers, and the Spear.