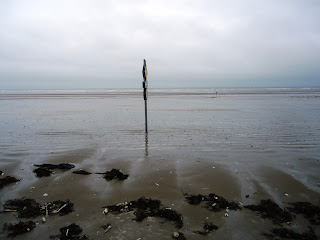 The daffodils are still slow in coming to full bloom in Gormanston. We stopped briefly to look at the large field of seasonal flowers north of Gormanston on the road to Julianstown this afternoon.

These slow blooming daffodils in one of the warmest parts of the island are a sure sign that winter took too long a grip on our climate this year. 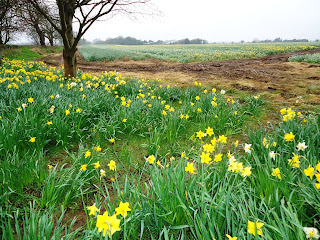 The daffodils are struggling to bloom in Gormanston, even though it is mid-April (Photograph: Patrick Comerford, 2013)

The high tide earlier in the day and the strong south-easterly wind had brought with them a strong fog and mist that enveloped the coastline of north Co Dublin and East Meath throughout the afternoon, and as we reached Laytown it was difficult to see out as far as the horizon on the sea to the east.

Although this should be Spring, I was reminded this evening of the words in John Keats’s poem, To Autumn, 1820:

Season of mists and mellow fruitfulness,
Close bosom-friend of the maturing sun;
Conspiring with him how to load and bless
With fruit the vines that round the thatch-eves run …

A star-fish stranded on a slipway down to the beach at Bettystown this evening (Photograph: Patrick Comerford, 2013)

The sea was choppy and the tide had receded when we reached Bettystown at 6, but the layers of shellfish deposited along the high water mark and the residual fishy smell were real deterrents to taking a walk on the mist-soaked sand. 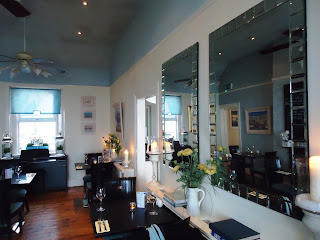 Instead, we enjoyed the views of the sea from the sheltered comfort of a table near the bay window in Relish, where we had a hearty early dinner. 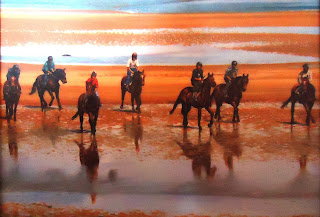 The Laytown Races ... a painting on the wall in Relish in Bettystown (Photograph: Patrick Comerford, 2013)

The restaurant’s walls are covered with paintings and photographs of the beach in summer, including scenes of the Laytown Races. Below us, out on the winter-like shoreline, we could see one lonely walker collecting shellfish in a plastic bag.

After coffee, we stepped out onto the terrace behind Relish. In sunshine, especially during summer, the views here are breath-taking, and the evening lights are captivating. We took one more short walk on the sands, and before sunset we returned back by the field of daffodils in Gormanston to Dublin.

The terrace at Relish, looking out over the beach at Bettystown this evening (Photograph: Patrick Comerford, 2013)