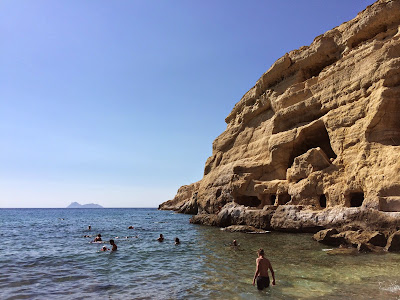 The beach at Matala has been popular with tourists since the late 1960s ... today, tourism is cushioning Crete against the worst effects of the Greek economic crisis (Photograph: Patrick Comerford, 2014)

The continuing success of tourism industry and the boost in tourism figures once again this year has cushioned people in many parts of Crete against the continuing problems besetting the Greek economy.

Once again, Greece is enjoying a record year for tourism. Popular resorts were booked to capacity this month and last month, with visitor numbers this season expected to have jumped by 30 per cent, according to figures circulated by hoteliers and tour operators.

A leading figure in the tourism industry estimated recently that visitor figures this year would come in at 19 million, up on the record figure of 17.9 million already recorded for last year. More optimistic predictions hope for a record 21 million visitors to Greece this year, nearly double the country’s population.

Greece’s unemployment still stands at 26.7 per cent, the highest in the EU, wages and pensions have been cut by an average of 40 per cent, and in a country that is working hard at building its tourism sector, only one in four Greeks say they canafford to take a holiday this year.

But restaurateurs, hoteliers and shopkeepers were telling me in Crete last week that although many proprietors had invested in Russian-language signs in recent years, there has been a drop-off in the number of tourists from Russia, Ukraine and the Balkan countries, and they fear this may have been partly due to the present crisis involving Russia and Ukraine. 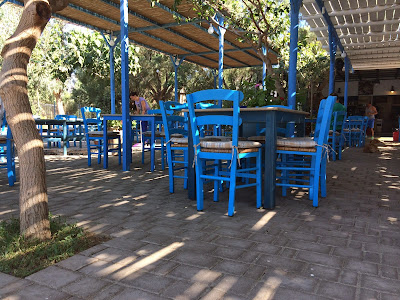 On the other hand, traditional markets such as Britain and Germany have recovered, and there has been some increase too in the numbers arriving on Greek islands on board cruise ships, although cruise operators continue to have a preference for the US and other destinations rather that Greece and the Mediterranean.

Tourism is Greece’s largest foreign exchange earner. This year, the figures could reach €13.5 billion this year, up from €12 billion, with spending per head up from €650 to €700. 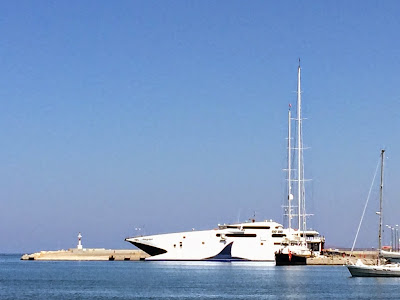 A dolphin-themed yacht at the marina in Rethymnon last week (Photograph: Patrick Comerford, 2014)

But political stability and substantial private investment is needed if this growth in the tourism sector is to continue. For example, the season is concentrated on the few months of high summer from June to September, and there are few luxury hotels, high standard marinas or golf courses of the sort that attract high spenders, while the development of the site of the former Athens International Airport at Hellenikon, used for the 2004 summer Olympics, is taking longer than many expected.

Nikos Kazantzakis International Airport near Iraklion is the main airport on Crete, and after Athens International Airport it is Greece’s second busiest airport. The staff at every level, from check-in to security, police and the shops display traditional Greek hospitality, friendliness and courtesy. But the airport is still grotty and shabby and could benefit from investment and a complete makeover.

The transport ministry has plans at the end of this year to offer a concession to build and operate a new international airport on a green-field site in central Crete.

Earlier this month, it was announced that Google is to offer management courses to 3,000 tourism businesses on Crete as part of an initiative to promote the tourism sector in Greece.

The first initiative will begin in early September in southern Crete and could be extended later out to other parts of Greece.

Greeks hopes that Google’s initiative will help to extend the tourist season by improving the visibility on the internet of companies in the tourism sector through greater use of tools such as Google My Business and Google AdWords. 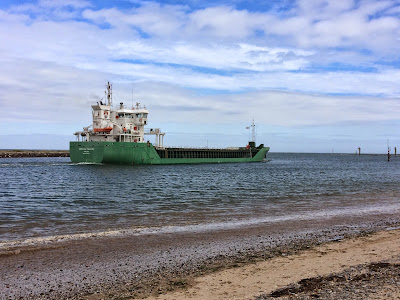 Sea traffic in the Boyne estuary at Mornington this afternoon (Photograph: Patrick Comerford, 2014)

This is a very short stretch of coastline for an Irish county, and Meath County Council boasts that this is the “Gold Coast” of Ireland. The beaches are beautiful, and have undeniable potential, and the welcome at Relish in Bettystown was as good as the welcome in any restaurant in Rethymnon last week.

But despite its rich golden stretch of sand, the beach at Bettystown was filthy this afternoon, with plastic bags and dirt everywhere.

It is a beautiful experience to walk on and the views are spectacular. But cars are allowed to drive on the beach, and despite sings announcing a 10 kph speed limits and warning about the presence of children, quads were speeding up and down the sands, doing donut turns to cheering onlookers.

On a number of occasions this summer, Meath County Council has advised people not to swim at Bettystown after test results showed an increase in levels of bacteria, including ecoli. Yet Meath County Council and the Environmental Protection Agency did not erect signs at the entrance to the beach after high bacteria levels were found in the water.

This has been a good year for tourism in Ireland too. Restaurateurs like the proprietors of Relish, are providing a high quality service, investing in the local economy and providing secure employment.

But our beaches are important attraction for both home and foreign tourists. The tourist beaches throughout Crete – and I visited more than half a dozen last week – are cleaned regularly throughout the day and carefully managed for the benefit of both tourists and the local economy.

When it comes to tourism, Ireland still has a lot to learn from Greece – and perhaps from Google too. 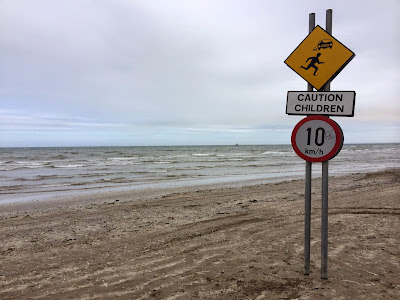 On the beach at Bettystown, Co Meath, this evening (Photograph: Patrick Comerford, 2014)

Posted by Patrick Comerford at 22:04 No comments: