Stepping back in time in Lismore and Cappoquin 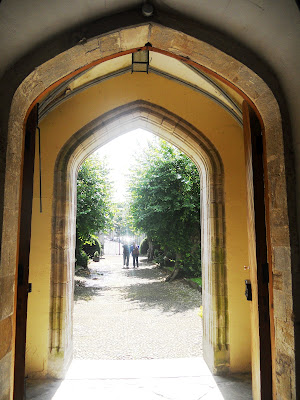 On the way back from Cork to Dublin yesterday afternoon, we drove out along the shore of the estuary and the harbour and on to Midleton and then north through Tallow to Lismore on the banks of the River Blackwater in West Waterford.

In Lismore, we had lunch in Foley’s on the Mall, a landmark Victorian pub that has become a gastropub, with a modern restaurant beside the “old-world” bar. It was first built around 1870 and has been in the ownership of the Foley family since 1880. Our choices were baked goat’s cheese and red onion tartlets, with mixed salad leaves and pesto, a crab and prawn bake, and house white wine.

Around the corner in the Mall, it was pleasant surprise to find a cathedral open on a Sunday afternoon. Lismore is tiny when you compare it with an average English cathedral city, and the cathedral is slightly off the beaten track. But there was a constant flow of tourists and visitors through the south porch to see this ecclesiastical gem which is open every day.

Saint Carthage’s Cathedral has been described on the Buildings of Ireland website as an “elaborate, monumental cathedral of national importance.”

The cathedral was founded in 635 by Saint Mochuda or Cartagh and was once at the centre of one of the great Irish monasteries, whose students included Saint Malachy, a 12th century Archbishop of Armagh.

The chancel and choir have been screened off and now serve as the parish church for Church of Ireland parish. The chancel ceiling was elaborately decorated during the 19th century and has been restored in its original colours.

The North Transept has been screened off and as Saint Columba’s Chapel it is reserved for private prayer and weekday Communions. The North Transept has a stained glass window by the pre-Raphaelite artist, Edward Burne Jones (1833-1898). It is only window of its kind in Ireland and shows Justice (a man with a sword and scales) and Humility (a woman holding a lamb).

Walking around the cathedral, it is impossible not to feel the former grandeur and majesty of this once-great centre of learning and church life.

The altar tomb of John and Catherine McGrath in the north-west corner of the nave dates from 1548 and is a fine example of 16th century stone carving, with the 12 apostles around the sides, each with his name in Latin. The inside frame of the west door is a Gothic riot – something you never imagine looking at it from the outside.

Beside it, five inscribed grave slabs are set in the south-west wall behind fencing, date from the ninth to the eleventh centuries.

The south transept monuments include one to Archdeacon Henry Cotton, whose Fasti Ecclesiae Hibenriae makes him one of the founding figures of Church of Ireland historical studies. 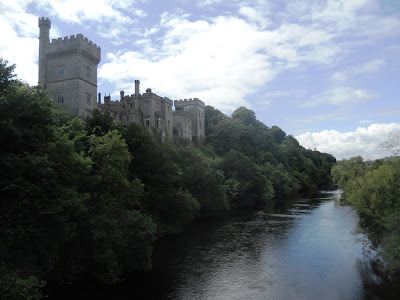 Lismore Castle, towering over the banks of the Blackwater (Photograph: Patrick Comerford, 2012)

From the cathedral, we walked down Deanery Hill to the entrance to Lady Louisa’s Walk and the fountain in the castle walls, and then stood on the bridge over the River Blakckwater, admiring the broad stretch of river west towards Tallow and east towards Cappoquin, with the massive Gothic pile of Lismore Castle towering above us.

We walked back up Saint Carthage’s Well to the main castle entrance. Robert Boyle, 14th son of the Earl of Cork and the father of chemistry who has given his name to Boyle’s Law, was born in the castle and baptised in the cathedral. Today, the castle is one of the many homes of the Duke of Devonshire.

We returned to the town for another stroll through the Square and the Main Street, reading the poetry on posters in the shop windows, before heading on east to Cappoquin. 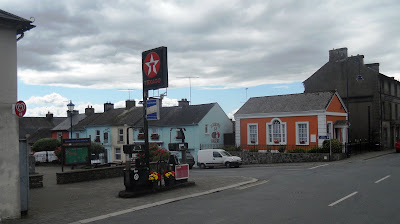 Little has changed on the streets of Cappoquin since my childhood (Photograph: Patrick Comerford, 2012) 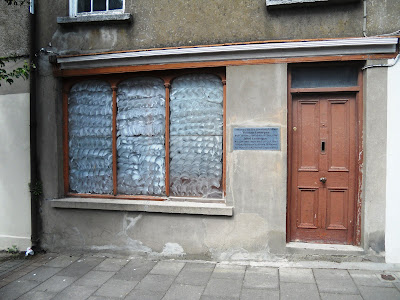 Sargent’s Garage, one of the first car dealerships in Co Waterford, and the Blakckwater Inn are closed, and so too is Lonergan’s, where the tailor brothers, the late Thomas and Noel Lonergan, once worked together in their shop window on the Main Street.

We enjoyed a brief stroll through the grounds of Cappoquin House, the home of Sir Charles Keane, whose father, Major Sir Richard Keane, died two years ago just a month short of his 102nd birthday. 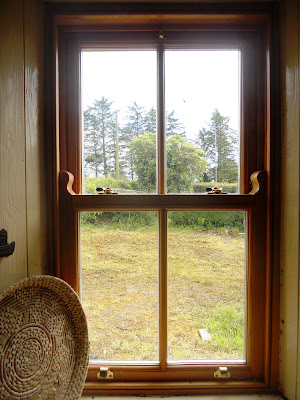 A window on the past at Moonwee (Photograph: Patrick Comerford, 2012)

From Cappoquin, we drove north towards Mount Melleray, stopping briefly at the Cats, and taking a look at the field across the road, where “The Stage” was the venue for summer dances and music in the 1950s and even in the early 1960s.

We then drove down the bohereen to Moonwee, for another sentimental visit to what had been my grandmother’s farm. It was three years since I was last there . 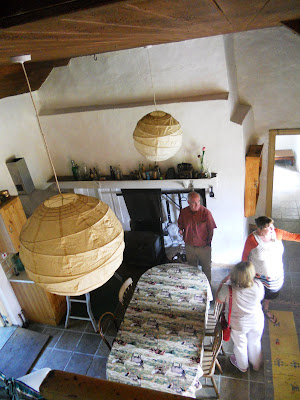 A step back in time ...looking down from the stairs to what had been my childhood bedroom (Photograph: Patrick Comerford, 2012)

This time Cindy and Steve O’Shea and their daughters were on hand to welcome us, and to show us how they have worked on restoring the old Hallinan homestead. It was step back in time to step up the stairs to what had once been my bedroom. In my mind’s eye I could see everything in the house as it was when I was a boy of eight or ten.

Back on the road over the Knockmealdown Mountains, we stopped to look at Bay Lough. As a child I was told this was a bottomless lake and the home of a witch known as ‘Petticoat Loose,’ who was condemned to empty the lake with a thimble.

We drove on past the monument where Samuel Grubb is said to have been buried standing upright on the side of Sugarloaf Hill in 1921, and on the Vee Road, in a gap in the mountains. Below us, the Golden Vale of Co Tipperary was spread like a carpet of green and gold as far as our eyes could see.

The Golden Vale spread before us like a carpet of green and gold as far as the eye could see (Photograph: Patrick Comerford, 2012)

Posted by Patrick Comerford at 18:13 3 comments: