Golden fields and sands in
autumn sunshine in Greystones 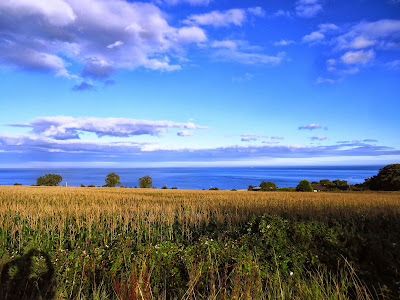 Almost 200 years ago, the English romantic poet John Keats (1795-1821) was walking along the banks of the River Itchen in Winchester. The golden Autumn experience was inspirational and in a letter written to his friend John Hamilton Reynolds on this day, 21 September 1819, Keats described the impression the scene had made upon him and how it inspired to write his poem To Autumn:

“How beautiful the season is now – How fine the air. A temperate sharpness about it ... I never lik’d stubble fields so much as now ... Somehow a stubble plain looks warm – in the same way that some pictures look warm – this struck me so much in my Sunday's walk that I composed upon it.”

The poem was published the following year in a volume of Keats’s poetry.

Here, the countryside is filled with warm, yellow stubble fields these weeks, and it is a beautiful season. In another few weeks, the churches will be decorated and we shall be celebrating and giving thanks for the harvest in our parishes.

But this afternoon it was almost as if summer had returned, and by the time we got to Greystones the temperatures were in the mid 20s.

It had been over a fortnight since I had walked a beach – there was a high tide and dusk was falling when we arrived in Carlingford last Sunday; and it is only two weeks since I arrived back in Dublin from Crete. After working during the morning on an essay on a summer visit to Grantchester and the poetry of Rupert Brooke, two of us headed for Greystones in the early afternoon.

Today in East Wicklow, in between the few grey clouds, there were expansive stretches of blue skies, and the sun seemed to be warming both the land and the sea.

After browsing through the shelves of the Village Bookshop, we had lunch in the Happy Pear in Greystones, and then after a stroll through Greystones, before walking on the sandy beach and along the shoreline. 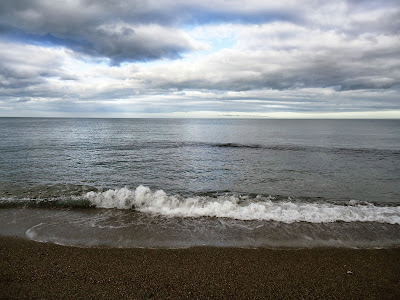 On the beach in Greystones this afternoon (Photograph: Patrick Comerford, 2013)

The sun was casting long shadows in the warmth of the extended afternoon, a few people were sailing and in small boats, and a happy number of people were in the water, bathing and swimming.

At this time of the year, I would normally admire the brashness and bravado of people who braved the sea temperatures. But today it seems the sea was warm, and small children never winced and needed no encouragement from their parents as they jumped in and out and back into the water.

On the way out from Greystones, and out along the M50, the yellow fields of harvest time with their green edges under the blue sky gave a golden warmth to the autumn afternoon in this “season of mists and mellow fruitfulness.” 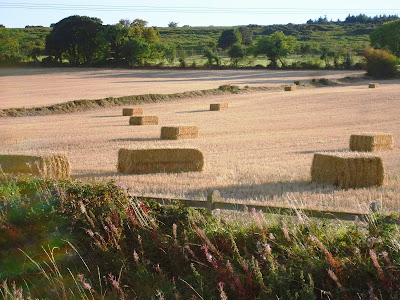 Golden fields near Junction 15 on the M50 this afternoon (Photograph: Patrick Comerford, 2013)

Season of mists and mellow fruitfulness
Close bosom-friend of the maturing sun
Conspiring with him how to load and bless
With fruit the vines that round the thatch-eaves run;
To bend with apples the moss’d cottage-trees,
And fill all fruit with ripeness to the core;
To swell the gourd, and plump the hazel shells
With a sweet kernel; to set budding more,
And still more, later flowers for the bees,
Until they think warm days will never cease,
For Summer has o’er-brimm’d their clammy cells.

Who hath not seen thee oft amid thy store?
Sometimes whoever seeks abroad may find
Thee sitting careless on a granary floor,
Thy hair soft-lifted by the winnowing wind;
Or on a half-reap’d furrow sound asleep,
Drows’d with the fume of poppies, while thy hook
Spares the next swath and all its twined flowers:
And sometimes like a gleaner thou dost keep
Steady thy laden head across a brook;
Or by a cider-press, with patient look,
Thou watchest the last oozings hours by hours.

Where are the songs of Spring? Ay, where are they?
Think not of them, thou hast thy music too, –
While barred clouds bloom the soft-dying day,
And touch the stubble-plains with rosy hue;
Then in a wailful choir the small gnats mourn
Among the river sallows, borne aloft
Or sinking as the light wind lives or dies;
And full-grown lambs loud bleat from hilly bourn;
Hedge-crickets sing; and now with treble soft
The red-breast whistles from a garden-croft;
And gathering swallows twitter in the skies. 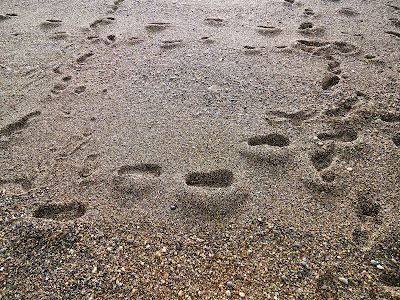 Footprints in the golden sand on the beach in Greystones this afternoon (Photograph: Patrick Comerford, 2013)