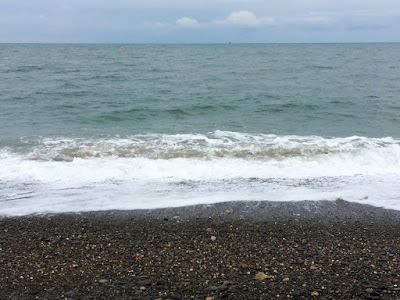 ‘With one consuming roar along the shingle / The long wave claws and rakes the pebbles down’ (Photograph: Patrick Comerford, 2015)

I was discussing John Betjeman’s faith and poetry in a reflection on Tuesday [20 October 2015]. Later, a friend and colleague asked me on oscial media whether I was also familiar with Betjeman’s poem ‘Felixstowe,’ or ‘The Last of Her Order.’

This friend could remember the late Professor Jim Hartin reading some of Betjeman’s amusing poems many years ago in what is now the Hartin Room in the Church of Theological Institute.

Those present that evening included members of the Redemptorist Community living at Marianella on Orwell Road, around the corner from CITI and Braemor Park.

Perhaps he remembered this poem because of Betjeman’s Orwell Road, although the Orwell Road the poet refers to is not in Rathgar, Dublin, but in Felixstowe in Suffolk, and takes its name from the River Orwell.

Perhaps Betjeman was attracted to this coastal town because of the Church of Saint John the Baptist on Orwell Road, which has been described as “the definitive statement in Suffolk of the liturgy and practice of 20th century High Church Anglicanism.” It is the tallest building, and is the only Suffolk church celebrated by Betjeman, who wrote of Saint John’s “red brick twilight.”

This was the last and one of the finest churches designed by the architect Sir Arthur Blomfield (1829-1899), whose great works included Selwyn College, Cambridge, and Saint Peter’s Church I Eaton Square, London. In Ireland, his only church is Saint Saviour’s in Arklow, Co Wicklow.

As with many of Blomfield’s churches, Saint John’s in Felixstowe looks like a cluster of smaller buildings around the great nave. Blomfield built most of Saint John’s in the early 1890s, and the Lady Chapel and the spire followed in 1899, the year he died. The south porch was added in 1940.

Felixstowe developed as a seaside town in the 19th century, and it became a fashionable resort in the late Victorian period. Its popularity was enhanced by new railway stations in 1877 and 1898, a new pier and a visit by the German imperial family. Because it was the only coastal town in East Anglia that faced south, Felixstowe enjoyed sunshine throughout the day in summertime.

Most of the pier was demolished during World War II. By the time Betjeman was writing this poem in 1955, Felixstowe was losing its elegance as an Edwardian seaside resort. Many of its vast red-brick houses, once beloved of Betjeman, have since been converted into flats. Today, Felixstowe is the fourth largest town in Suffolk and has a population of about 23,700. It is home to one of the largest and busiest container ports in Europe.

A convent stands to the west of the church, in the shadow of Saint John’s and below “louder clang the waves along the coast.” But if this is the convent Betjeman had in mind when he wrote this poem in the 1950s, he ought to have known that it is not the house of a declining Anglican order but the home of a busy Catholic order, the Religious of Jesus and Mary. The convent chapel dates from the 1930s, and in contrast to Saint John’s it is functional in design. It is not open to the public.

Nevertheless, in ‘Felixstowe’ or ‘The Last of Her Order,’ Betjeman writes a poem that has the impact and fullness of a novel.

“O Lord, thou hast searched me out, and known me: thou knowest my down-sitting and mine up-rising, thou understandest my thoughts long before.”

‘Felixstowe’ or ‘The Last of Her Order’

With one consuming roar along the shingle
The long wave claws and rakes the pebbles down
To where its backwash and the next wave mingle,
A mounting arch of water weedy-brown
Against the tide the off-shore breezes blow.
Oh wind and water, this is Felixstowe.

In winter when the sea winds chill and shriller
Than those of summer, all their cold unload
Full on the gimcrack attic of the villa
Where I am lodging off the Orwell Road,
I put my final shilling in the meter
And only make my loneliness completer.

In eighteen ninety-four when we were founded,
Counting our Reverend Mother we were six,
How full of hope we were and prayer-surrounded
“The Little Sisters of the Hanging Pyx”.
We built our orphanage. We ran our school.
Now only I am left to keep the rule.

Here in the gardens of the Spa Pavilion
Warm in the whisper of a summer sea,
The cushioned scabious, a deep vermillion,
With white pins stuck in it, looks up at me
A sun-lit kingdom touched by butterflies
And so my memory of winter dies.

Across the grass the poplar shades grow longer
And louder clang the waves along the coast.
The band packs up. The evening breeze is stronger
And all the world goes home to tea and toast.
I hurry past a cakeshop’s tempting scones
Bound for the red brick twilight of St. John’s.

‘Felixstowe’ or ‘The Last of Her Order’ from Collected Poems © The Estate of John Betjeman.