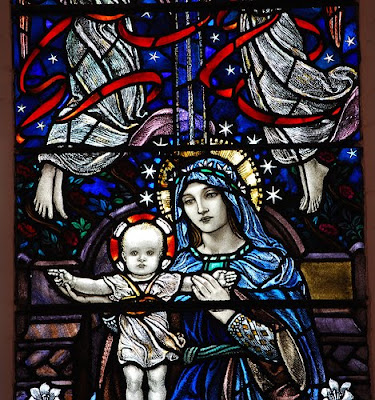 I’ve been in Leicester for the past few days, taking part in a training conference on interfaith relations, run by Saint Philip’s Centre for about a dozen people from the Church of Ireland.

Leicester is an East Midlands city, the county town of Leicestershire and with a population of almost 300,000 people. This is one of the oldest cities in England, with a history going back at least 2,000 years. There are ancient Roman pavements and baths, dating from the early settlement of Ratae Corieltauvorum, a Roman military outpost in an area inhabited by the Celtic Corieltauvi tribe.

When the area was settled by the Middle Angles, this became part of the Kingdom of Mercia, centred on Tamworth. Leicester was the centre of a bishopric from about 679 until the ninth century, when it was captured by the Vikings or Danes and became one of the five fortified towns of Danelaw.

When the Saxon Bishop of Leicester fled to Dorchester-on-Thames, Leicester ceased being the centre of a diocese, and did not recover this place in the church until the opening decades of the 20th century.

So where did the name Leicester come from? According to Geoffrey de Monmouth’s Historia Regum Britanniae (1136), King Leir, a mythical king of the Britons, founded the city of Kaerleir (“Leir’s chester” or fortified town). King Leir was supposedly buried by Queen Cordelia in a chamber beneath the River Soar, and Shakespeare’s King Lear is based loosely on the legend.

However, Leicester’s name probably comes from the Latin word castra, referring to the camp of the Ligore, or the camp on the River Legro, an early name for the River Soar. In the early 10th century it was recorded as Ligeraceaster or the town of the Ligor people. Leicester appears in the Domesday Book as Ledecestre,

The tomb of King Richard III is located in the central nave of Leicester Cathedral although he is not actually buried there. He was originally buried in the Greyfriars Church in Leicester, but legend says his body was exhumed on orders issued by King Henry VII and thrown into the River Soar.

Later, Leicester thrived as market town until the dawn of the Industrial Revolution. From the 19th century on, this was a major economic centre with a variety of industries, including engineering, shoemaking and hosiery factories.

Leicester expanded throughout the 19th century, most notably in 1892, and I am staying in Stoneygate, once one of the expanding residential suburbs of the late 19th century, when it was home to many of the city’s wealthier families and some of its growing middle class.

Leicester was eventually re-made a city in 1919, and the Church of Saint Martin became Leicester Cathedral in 1927 – the fourth smallest Anglican cathedral in England

Within ten years, Leicester was listed as the second richest city in Europe in 1936, and became an attractive place for refugees.

Leicester is the setting for Sue Townsend’s Secret Diaries of Adrian Mole,who lives in a fictional suburb known as Mangold Parva. There, Adrian Mole lives and owns a second hand bookshop in the later novels, and his girlfriend has grown into Pandora Braithwaite, a fictional Labour MP.

In reality, Leicester today is an ideal location for interfaith training. The city has a large population of South Asian origin, with well-known Muslim, Sikh, Jain, Hindu and Jewish places of worship. It is said immigrant groups today make up about 40% of Leicester’s population, making this one of the most ethnically diverse cities in Britain.

Immigrants from the Indian sub-continent began to arrive in the 1960s, their numbers boosted by East African Asians expelled from Kenya and Uganda in the early 1970s.

Some years ago, the Commission for Racial Equality (CRE) estimated that by this year (2011) Leicester would have approximately a 50% ethnic minority population, but critics says these are “unsubstantiated claims” that have “ignored government statistics.” Christianity remains the predominant faith in Leicester, but there are also about 41,000 Hindus, 31,000 Muslims, and 12,000 Sikhs.

Close to Saint Philip’s is the Masjid Umar is one of the most prominent mosques in Leicester, which we visited at lunchtime yesterday. This mosque has won architectural awards for its modern design yet it still retains strong elements of Islamic architecture.

The city motto, Semper Eadem, the motto of Queen Elizabeth, who granted a royal charter to Leicester, means “always the same.” But as Bishop Tim Stevens told us yesterday afternoon, change is at the heart of everyday life in Leicester.
Posted by Patrick Comerford at 06:30 No comments: