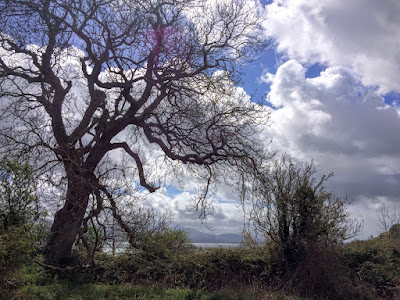 ‘A Bay in Anglesey’... where was John Betjeman’s poem set, and did his ancestors come from Anglesey (Photograph: Patrick Comerford, 2016)

In recent days, I have been re-reading the poems of Sir John Betjeman, finding his poem Variation on a Theme by Newbolt appropriately illustrated the parable of the widow who demands justice from a cold and impassionate judge (Luke 18: 1-8), with Betjeman telling the story of the widow of a banker or lawyer whose plight is ignored by her husband’s former boardroom colleagues.

In my re-reading of Betjeman’s poetry, I turned again to his poem, Beaumaris December 21, 1963, which rekindled warm memories of my visit to Beaumaris in Anglesey earlier this year [30 April to 2 May 2016].

But until this week, I did not Betjeman’s close connections with Angelsey, and so I was prompted to explore these links when I read his poem A Bay on Anglesey earlier this week, aided by memories of my visit to Beaumaris and Angeley earlier this year [30 April to 2 May 2016].

John Betjeman was born in London on 28 August 1906, an only child and had a lonely childhood. The family spent frequent holidays in Cornwall, which inspired much of his later work, including his many poems with seaside themes.

Betjeman had a life-long love of the British coastline, but I wondered from these two poems set in Anglesey about his connections with the large island off the north-west coast of Wales.

The family originally spelled the surname as ‘Betjemann,’ but the second ‘N’ was dropped because it sounded German during World War I. His ‘foreign’ sounding surname worried the poet over the years, and even caused him to question his own very English identity.

However, his discovery of his family’s Welsh ancestry gave him an enthusiasm for his Celtic heritage. He spent time in Wales, and visited places he understood his family to have connections with, including Anglesey. 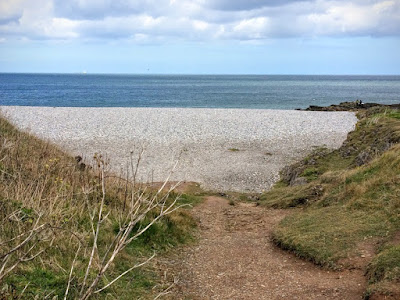 A small cove at Penmon ... but where did Betjeman’s ancestors come from? (Photograph: Patrick Comerford, 2016)

It is difficult to find any definite link between Betjeman and Anglesey. But he believed he was descended from the Merrick or Meyrick family of Bodorgan Hall in south-west Anglesey.

According to family lore, the Betjemann family married into the Merrick family, but that later descendants, possibly twin boys born out of wedlock sometime in the late 18th century, were cheated out of an inheritance, including the Bodorgan Estate, by their guardians.

The story fascinated Betjeman, and even lead to him learning Welsh to a very high standard. But it is without any documentary evidence or support, and Betjeman’s family can only be traced back to the brothers Joseph Merrick (ca 1774-1846) and William Merrick (ca 1774-1845) were living in London by the end of the 18th century. But, while they were of similar age, there is no evidence that they were either twins or members of the Meyrick family of Bodorgan Hall.

George Betjemann, was apprenticed as a cabinet maker at the age of 14 in 1812 to his uncle, Gilbert Slater at his premises on Carthusian Street, London. In 1834, George joined his father-in-law, William Merrick, at his cabinet making business on Red Lion Street, Clerkenwell, London.

In 1925, Betjeman went to Magdalen College, Oxford. It is commonly believed that he was sent down for failing to pass the mandatory scripture exam known as ‘Divvers’ (short for ‘Divinity’). Certainly, he completed one paper in Welsh after, it is said, a tutor arrived from Aberystwyth by train in Oxford by train twice a week to coach him.

Betjeman died on 19 May 1984 at Trebetherick in Cornwall, and was buried close by near to the sea.

Bodorgan Hall still belongs to the Meyrick family. It is close to the Irish Sea and is the largest estate on Anglesey. It is the home of Sir George Meyrick and his family.

The house, dovecote and barn are Grade II listed buildings and it is also listed as an Area of Outstanding Natural Beauty and an Environmentally Sensitive Area on the Malltraeth estuary. The estate contains woodland, terraced and walled kitchen gardens, a large circular dovecote, lawn and a deer park. The house was completed between 1779-1782, and significant additions were made in the mid-19th century.

The story of Bodorgan Hall goes back over 1,000 years, and during the mediaeval period it belonged to the Bishops of Bangor. The Merrick or Meyrick family ere one of the most powerful families on Anglesey and were descended from Meyrick ap Llewellyn (Meuric), a Captain of the Guard at the Coronation of Henry VIII in 1509. He was the first High Sheriff of Anglesey, and held this office until he died ca 1538.

The estate probably came into the hands of the Meyrick family when Rowland Meyrick was Bishop of Bangor, and they built a Tudor mansion with sprawling gardens. However, the Bodorgan estate was crushed by the cost of the litigation and by 1590 a substantial portion had been sold to discharge family debts.

Owen Meyrick (1682-1760) set the estate on a strong foundation, looked after it ceaselessly and carefully, and considerably enlarged its boundaries. In the Anglesey election in 1708, he opposed Lord Bulkeley, challenging the Bulkeley family’s political domination of the island. He was elected an MP in 1715, and held the seat until 1722. He was also sheriff (1705-1706) and Custos Rotulorum from 1715 until his death in 1759.

Owen Meyrick was succeeded by his son, Owen Meyrick II (1705-1770), who married a wealthy heiress, the daughter of John Putland of London. His grandson, Owen Meyrick (1752-1825), was equally fortunate in his marriage, to Clara, daughter and heiress of Richard Garth of Morden, Surrey.The Tudor house was demolished in 1779 to make way for a new house, outbuildings and a poultry court, designed by the architect John Cooper for Owen Putland Meyrick and built in 1779–1782. The design shows some similarities to Baron Hill, on the edges of Beaumaris, where Cooper had been employed as an assistant to Samuel Wyatt, working for Lord Bulkeley.

The estate acquired additional wealth when Clara Meyrick, daughter and co-heiress of Owen Meyrik (1752-1825), married Augustus Fuller of Ashdowne House, Sussex. Their son, Owen Fuller (1804-1876) adopted the name of Meyrick when he inherited the Bodorgan estate on the death of his grandfather in 1825. Owen Fuller Meyrick made extensive changes to the driveway and gardens, and moved the entrance to the north of the house from the east. He was responsible for building the porch and forecourt before his death in 1876.

Today, Bodorgan Hall is the home of Sir George Meyrick and his wife, Lady Jean Tapps Gervis Meyrick, a niece of the Duke of Buccleuch. The estate includes a farmhouse rented by the Duke and Duchess of Cambridge.

The poem ‘A Bay in Anglesey’ could be set anywhere along the shores of Anglesey. Was it somewhere near Bodorgan Hall? Was it near Beaumaris where he wrote about the Queen of the Hunt Ball? 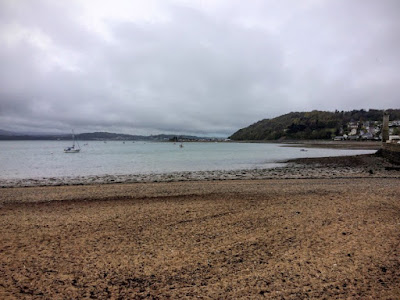 The poem ‘A Bay in Anglesey’ could be set anywhere along the shores of Anglesey (Photograph: Patrick Comerford, 2016)

A Bay In Anglesey, by John Betjeman

The sleepy sound of a tea-time tide
Slaps at the rocks the sun has dried,

Too lazy, almost, to sink and lift
Round low peninsulas pink with thrift.

The water, enlarging shells and sand,
Grows greener emerald out from land

And brown over shadowy shelves below
The waving forests of seaweed show.

Here at my feet in the short cliff grass
Are shells, dried bladderwrack, broken glass,

Pale blue squills and yellow rock roses.
The next low ridge that we climb discloses

One more field for the sheep to graze
While, scarcely seen on this hottest of days,

Far to the eastward, over there,
Snowdon rises in pearl-grey air.

And filling in, brimming in, sparkling and free
The sweet susurration of incoming sea. 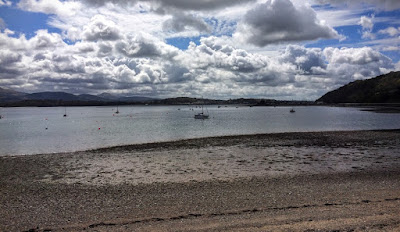 ‘The sleepy sound of a tea-time tide’ ... walking along the beach at Beaumaris (Photograph: Patrick Comerford, 2016)