‘A moment of sweetness, free and wild’

Blackberries in “the sunshine and rain of summer” and in the brambles and briars of Kilcoole this afternoon (Photograph: Patrick Comerford, 2011)

“A purple stain on the lip, a gritty seed between teeth, the little black orbs rolled around in the mouth releasing the sunshine and rain of summer …”

Paul Evans was writing in his ‘Country Diary’ in The Guardian earlier this week about picking blackberries on Wenlock Edge in Shropshire.

I picked my first blackberries of the summer a few weeks ago in the brambles and briars along Cross-in-Land Lane, a country lane on the edges of Lichfield, while I was staying in my favourite cathedral city for a few days in the middle of August.

I enjoyed more blackberries at the beginning of last week, along the edges of the narrow roads around the village of Glaslough while I was staying in Castle Leslie in Co Monaghan.

After the Capitular Eucharist and a meeting of the chapter in Christ Church Cathedral this morning, four of us went for lunch in Corfu, the new Greek restaurant that has opened in Parliament Street in Dublin.

The sun was still shining after lunch, and the temperatures were hovering around 20. And so, two of us went in search of more blackberries this afternoon in the brambles and briars in Kilcoole, Co Wicklow, along the edges of Sea Road, as it narrows on its way down from the village to the shoreline and the beach.

A bountiful harvest in the fields in Kilcoole this afternoon (Photograph: Patrick Comerford, 2011)

We collected enough to fill a small bag as we rambled around those brambles. In behind the hedgerows and the briars, the green and golden fields provided glimpses of how full the harvest has been this year. Despite the worst summer in the memory of many, farmers have benefitted from the rich and bountiful combination of “the sunshine rain of summer.”

Stranded sprats along the shoreline in Kilcoole this afternoon (Photograph: Patrick Comerford, 2011)

We left our modest collection of blackberries in the car and went for a stroll on the beach. The tide was high and rough and hundreds of dead sprats were scattered along the shoreline. These tiny oily silver fish are often sold as anchovies or sardines. But none of the men and boys with rods and lines along the shore was interested in the sprats this afternoon or taking them home to fry. Instead, the shoals of dead sprats were a sign of shoals of mackerel only a little distance out ... and they were being caught freely and easily without bait or effort, four and five at a time.

Further out, a few seals were bouncing and bobbing about, pushing the mackerel in further towards the shore.

Along the sand, some birds were happy to bounce around, cheerfully feeding on the smaller fish that were being ignored by the anglers. 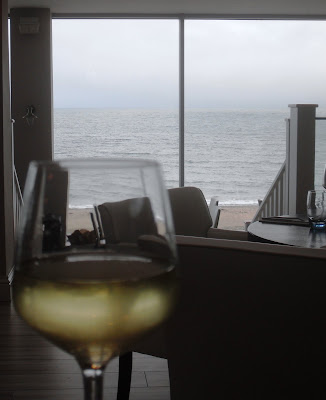 Looking out from the Beach House towards the beach in Bray this evening (Photograph: Patrick Comerford, 2011)

We headed back though Greystones to Bray, and after a short walk along the promenade we enjoyed an early dinner in the Beach House on Strand Road, looking out on the beach as dusk began to close in.

And, as I thought about going home and heating up those blackberries from Kilcoole to eat with some ice cream, I happily recalled how poetical Paul Evans was in The Guardian on Wednesday as he wrote about those blackberries on Wenlock Edge:

“With their roots in the past, their leaves filled with the here and now and their fruits for the future, the brambles shared something with another world. A stain on the lips, seeds in the teeth, a taste of sunlight and rain on the tongues … Soon to be lost: a moment of sweetness, free and wild.”

Blackberries in full fruit a few weeks ago on the edges of Cross-in-Hand Lane, on the northern fringe of Lichfield (Photograph: Patrick Comerford, 2011)
Posted by Patrick Comerford at 22:05 No comments: