A sun-kissed afternoon on the beach at Bettystown 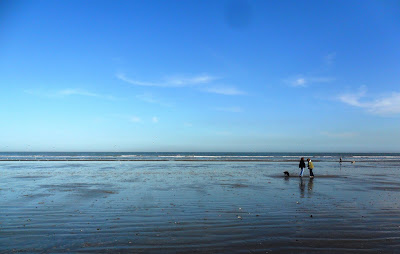 Blue skies and blue waters along the shoreline at Bettystown this afternoon (Photograph: Patrick Comerford, 2011)

This has been such a beautiful, sun-kissed day on the East Coast that it is possible to believe that if Spring has not yet arrived then is surely it is on its way.

I worked through last weekend, and had no walk on the beach. Then this week was tough, with a morning in hospital for consultations, and much of another morning at the end of the week taken up with a visit to my GP for further discussions about my sarcoidosis, test reports and a B12 injection.

None of this has taken away from the joys of the week – which included an evening out with friends, including dinner and the theatre.

But when I woke up this morning, the sun was filling the back of the house with bright light, and I knew this was a day that could not be wasted. 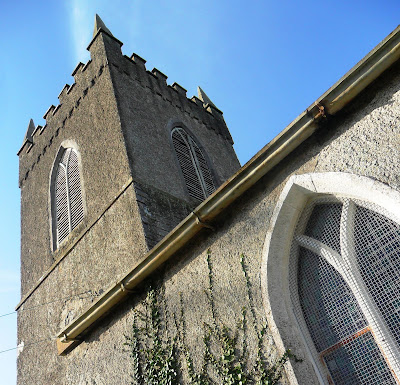 Two of us headed up to Drogheda, discussed heading out to Newgrange and the Boyne Valley, or strolling through the streets of Drogheda. But we quickly decided on turning south again, and stopped first at Colpe to look at Saint Columba’s Church. This former Church of Ireland parish church was built in 1809, the site of earlier churches.

Saint Columba’s is a three-bay hall with a more than usually stocky square tower. From 1182 to the Dissolution of the Monasteries in the 16th century, Colpe was an Augustinian grange of Llanthony in Monmouthshire. More recently, the church was part of Julianstown Union, along with Saint Mary’s in Drogheda and Saint Kieran’s in Duleek.

Saint Columba’s was closed as a church in 1996 and later became a furniture store, although there was no sign of life there this afternoon, although the graves in the churchyard were interesting.

.From Colpe, we headed on through Mornington to the beaches of Bettystown and Laytown.

The tide was out at Bettystown, the sun was warm and creating glistering reflections in the pools left in the rippling sand, and I felt my body was being bathed – almost anointed – in the sunshine as I walked along the beach, first south towards Laytown, and then back north, alongside the golf links.

Families were out walking with their dogs, on the sand-dunes, three golfers stood out in silhouette, a lone child cycled obliviously on his own along the shoreline, someone had taken a jet ski out into the water, and three teenagers had joyously braved the waves.

No-one was flying a kite on the beach in Bettystown this afternoon, but we stopped to look at Jarlath Daly’s 18ft bronze and stainless steel sculpture in Bettystown Square, ‘Flying a Kite’ (2004). 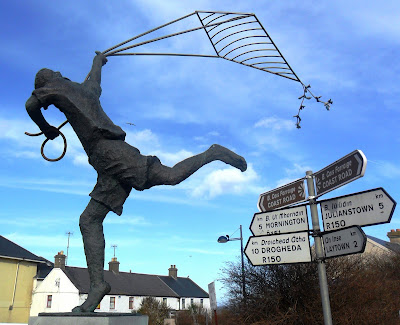 From there, we headed on to a late lunch – or was it an early dinner? – in Relish. With its blue and white decor, its cosy, cobbled courtyard, and its views out onto the beach, Relish has a Mediterranean atmosphere on afternoons like this.

We continued gazing out on the beach as we ate. But by the time we got back onto the beach a strong mist was descending and fog was moving in from the eastern shore.

We headed back through Laytown, and on the straight road up to Julianstown the sun was setting in the west through the branches of the trees that formed an avenue looking into the sunset. We continued along the coast road, through Gormanston and Balbriggan, to enjoy the dusky view across the bay and the harbour towards Skerries. There we drove up around Red Island, and back along South Strand.

But darkness had covered the town, and it was time to head back through Rush and Lusk, and home to watch the Leinster v Cardiff match.
Posted by Patrick Comerford at 20:03 No comments: