A sunny afternoon in Greystones 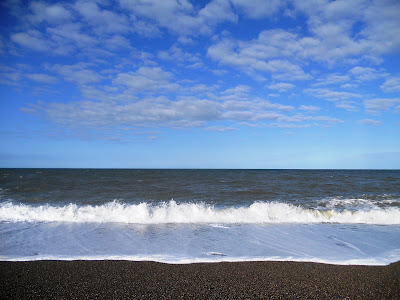 Waves rolling and breaking against the shoreline in Greystones this afternoon (Photograph: Patrick Comerford, 2012)

It is difficult to believe the change in the weather over the past 48 hours. On Wednesday night, on the way back from Dunlavin through Blessington, the rains were heavy, the winds were high and the roads were flooding in the Wicklow Mountains.

By Thursday evening, it looked as though the wind and the rains had blown and washed much of the blossoms from the cherry trees in the Churchtown area, and the verges and footpaths were covered in pink, snow-like blankets. 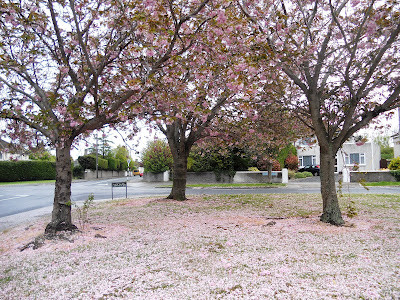 But the sun came out this afternoon, and despite a chill being blown in by a north-easterly breeze, the skies were blue and there was a heart-warming glow in the sunshine. It was an afternoon to be cherished.

After reading, marking, learning and inwardly digesting essays, assignments and dissertations during the morning, two of us drove down the M50 to Bray this afternoon and on to Greystones. Parking in Burnaby Road, we stopped for coffee in Insomnia before going behind the railway line and on to the lengthy beach for a long stroll.

The sand was damp, but the skies were still blue, and the tide was rolling in. There was a strong thunder-like sound as the waves rose, broke and clapped against the shoreline. Without the chill in that north-easterly, it might have been easy to imagine that summer is on the way. 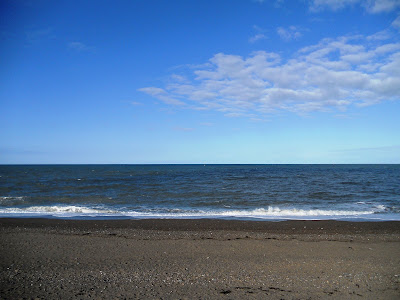 Looking down on the beach from the bank beside the railway line south of Greystones (Photograph: Patrick Comerford, 2012)

We stepped up onto the bank above the sand and running alongside the railway line, as we walked back towards Greystones and the DART station.

As the road rose out of Greystones on the way back north towards Bray, the fields were green beneath the sunshine. Below us, the Irish Sea spread out to the east, and the new harbour at Greystones stood out clearly behind us.

There has been a beautiful sunset this evening. The rains are expected to return over the weekend. But the end of April holds promises of bright summer days ahead. 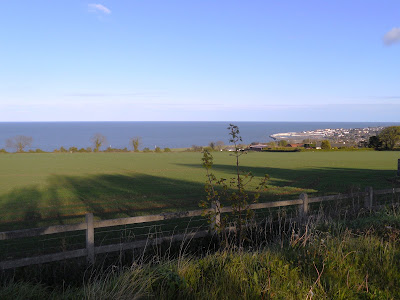 Looking back at Greystones and out to the Irish Sea on the road to Bray (Photograph: Patrick Comerford, 2012)

Posted by Patrick Comerford at 21:31 No comments: