Half a century ago, Irish politicians were unhappy with the media … the ‘Irish Times’ exhibition in the Little Museum of Dublin (Photographs: Patrick Comerford, 2014)

This morning I was deacon at the Cathedral Eucharist in Christ Church Cathedral, Dublin, reading the Gospel and assisting at the administration of the Holy Communion. In the late afternoon, four of us had a late lunch (or was it an early dinner?) at Brasserie 7 in Capel Street.

Earlier in the afternoon, two of us visited the Little Museum of Dublin on Saint Stephen’s Green.

On the top floor of the museum, the exhibition in ‘The Irish Times Editor’s Room’ offers a snapshot of the newspaper’s 150-year history, built around the persona of its most famous editor, RM ‘Bertie’ Smyllie, who was editor of The Irish Times from 1934 to 1954. The exhibition was curated by Irish Times journalist Peter Murtagh, who described the newspaper during Smyllie’s time as an “extraordinary place.”

The exhibition includes Smyllie’s old typewriter, which was given to The Irish Times by Maeve Binchy, and the front page of the paper marking VE Day on 8 May 1945.

In order to get past the censors, who frowned on partisanship during World War II, Smyllie ensured the photographs on that front page were marked out in a V shape, a subliminal sign of support for the British war effort.

This was The Irish Times of Patrick Campbell, Patrick Kavanagh, Flann O’Brien and others of the Palace Bar set. It was during this period that The Irish Times moved from being the traditional newspaper of Southern Unionists to the mainstream newspaper it is today.

Last month, Peter Murtagh pointed out: “It is not often remembered … that Smyllie gave Éamon de Valera a fair wind in his editorials when the Fianna Fái lleader attained power; nor that he gave little quarter to the Blueshirt element that emerged in Irish politics in the 1930s.”

Previously, I had been a freelance contributor to the Lichfield Mercury and the Tamworth Herald when I joined the editorial staff of the People Newspapers in Wexford in 1972. The People Group included the Wexford People, the Enniscorthy Guardian, the New Ross Standard, the Wicklow People and the Bray People.

I never worked for the Irish Independent, but it never descended to the base level of English newspapers that reach the same market, such as the Daily Mail and the Daily Express. Indeed, the standards of Independent journalists often kept Irish Times journalists on our toes, and at times were a bulwark against proposed cuts in D’Olier Street.

I am not a fan of the Sunday Independent, but I have admired the work of many of its contributors over the years, who have ranged Hugh Leonard to Shane Ross. 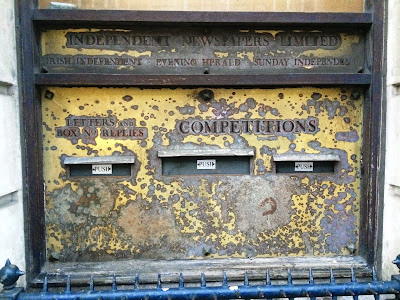 Reminders of the Independent Newspaper group at the former offices in Middle Abbey Street this afternoon (Photograph: Patrick Comerford, 2014)

I was reminded of all this when, on my way to Capel Street late this afternoon, I passed the deserted former Independent Newspapers offices in Middle Abbey Street.

The recent threat to the Independent, its editor and its journalists from the Sinn Fein President, Gerry Adams, is a threat to all who write for and who benefit from the liberties defended by a free media – whether this is the printed press, the broadcast media, or internet writers on websites and blogs.

At a recent Sinn Fein $500 a plate fundraiser in New York, Adams recalled that Michael Collins dealt with critical press coverage from Independent Newspapers by holding the editor at gunpoint and dismantling printing presses.

Adams made his comments at a fundraising function in New York and repeated them in a later online blog posting. It is disturbing to listen to his speech online and hear his audience laugh and applaud Adams.

He told those rich Irish-Americans who laughed and clapped that in 1919 Michael Collins was annoyed by the Irish Independent. So, according to Adams, Collins “went in, sent volunteers in, to the offices, held the editor at gunpoint, and destroyed the entire printing press. That’s what he did.”

That went down well with his audience, and so Adams continued: “Now I can just see the headline in the Independent tomorrow. I’m obviously not advocating that.” He pauses for laughter.

So far this year, 42 journalists have been killed in the course of their work. They include journalists working in the print, broadcast and online media. Each year, I am invited to take part in a service organised to recall the lives of deceased staff members of The Irish Times. Each year, this service is a reminder that our free press comes at a price … it may not involve the deaths of journalists, but certainly it saps the commitment and lifeblood of all who are engaged in maintaining the standards of journalism in a free society.

Despite this, Adams was insistent at the weekend in standing over what he said: “I have no intention of withdrawing my remarks.”

The World Association of Newspapers and News Publishers and the World Editors Forum – together representing 18,000 publications, 15,000 online sites and some 3,000 companies in more than 120 countries – have condemned Adams.

The chair of Independent News & Media, Leslie Buckley said the remarks threaten the entire free media in Ireland. He said Adams’s comments about holding an editor at gunpoint are “careless” and “at worst” are insidious.” He added: “I believe this to be a veiled threat by Mr Adams not only to journalists at INM but the entire free media on this island, whether broadcast, online or print.”

Mr Buckley reminded us that these comments by Adams are all the more concerning because of the murders of two campaigning journalists from Independent News & Media – Veronica Guerin of the Sunday Independent and Marty O’Hagan of the Sunday World – in the course of their work.

Mr Buckley said that the role of a free media in our democracy is of paramount importance. “A free press ensures government and public officials are held accountable, the public is informed and citizens are given a voice,” he said. “His comments show a complete lack of acceptance of the importance of a questioning, probing, authenticating and in some cases, sceptical media.”

The World Association of Newspaper and News Publishers (WAN-IFRA) said in a statement: “We are seriously concerned that this remark may be viewed as a veiled threat against Independent News & Media journalists and editors, whom you have criticised for investigating the Mairia Cahill rape scandal. Two Independent News & Media journalists have been murdered in the past 20 years; Veronica Guerin was shot dead in Dublin because of her reporting on criminal operations in 1996; and Martin O’Hagan was murdered in Northern Ireland by the Loyalist Volunteer Force in 2001.”

The National Union of Journalists (NUJ) has also condemned the New York speech as “ill-judged and inappropriate in the context of the daily threats of violence against journalists globally.”

The chair of the National Newspapers of Ireland (NNI), Vincent Crowley, says the comments show a lack of understanding of the role of a free press: “Whilst a free press may sometimes make uncomfortable reading for politicians and others, it remains the indispensable means of keeping the public informed and holding those in positions of power accountable.”

But when Adams was asked at the weekend whether he would retract his “editor at gunpoint” comments, he responded sarcastically and told the Sunday Independent: “I’m actually thinking of writing a piece about it. I’ll let you have it next week.”

Although Sinn Fein is quick to exploit Irish libel laws and to appeal to institutions like the Press Council and Press Ombudsman, it is adept at intimidation.

Adams says his remarks were no more than a harmless joke. But anyone who criticises Sinn Fein or makes fun of anything they hold dear can expect thunderous complaint.

Three years ago, I received a torrent of abusive (and illiterate) messages when I wrote about a Sinn Fein commemoration in Skerries, at which a colour party was dressed in uniform black, with berets and dark glasses, and marched in military precision, carrying the flags of the four provinces.

The abuse continued. I was told that “if it was not for the likes” of the IRA member I “would have not got your silver spoon education” – considering I paid for my own third-level and post-graduate education while I was working as a journalist, and my parents worked hard to pay my school fees, that certainly was a revelation.

Adams refuses to withdraw his remark, but with mixture of self-pity and menace, he writes in his blog about “a vile smear against me and against Sinn Fein” by “these modern-day McCarthyites.”

His remarks in the past week are a threat not only to Independent journalists, but to all who work in the media, whether it is the press, the broadcast media, or on the internet. If, as Adams hopes, Sinn Fein is in government North and South in 2016, the centenary of the Easter Rising, we can expect a poor lookout for free speech. 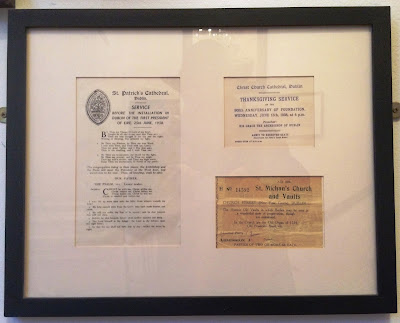 A reminder in the Little Museum of Dublin that the first President of Ireland was a member of the Church of Ireland (Photograph: Patrick Comerford, 2014)

Posted by Patrick Comerford at 21:21 No comments: