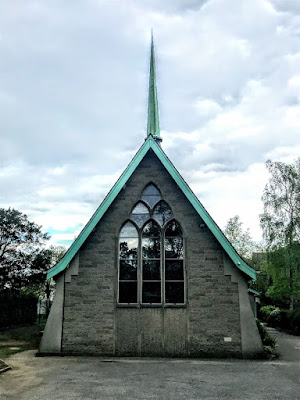 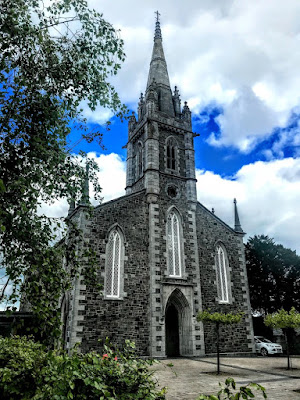 The start of last week’s One Day International between Ireland and England at Malahide Cricket Club was delayed for two hours on Friday morning. This gave me an opportunity for a first-time visit Saint Sylvester’s Roman Catholic parish church, Dublin Road, beside Malahide Railway Station.

The church takes its name from the ancient well in Old Street (formerly Chapel Street), Malahide, that honours Sylvester, who is said to have been part of the fifth century Christian mission to Ireland.

However, very little is known about the first Christians who lived in the area. The earliest church in Malahide for which there is documentary evidence is that of Saint Fenweis or Saint Fenwe (possibly Saint Finian), which stood on the site of Malahide ‘Abbey’ in the grounds of Malahide Castle.

In the centuries after the Reformation, the Talbot family of Malahide Castle allowed Mass to be celebrated in their home until as late as 1731.

By 1760, a simple thatched chapel stood just south of Saint Sylvester’s Well on a site donated by Richard Talbot, and this new chapel was dedicated to Saint Sylvester.

Over time, this small church was extended in a piecemeal fashion and by 1841 its short, broad nave had acquired no less than four extensions. One extension served as a sacristy and schoolroom, and a second was a porch that opened onto Old Street. No trace of that first Saint Sylvester’s has survived. 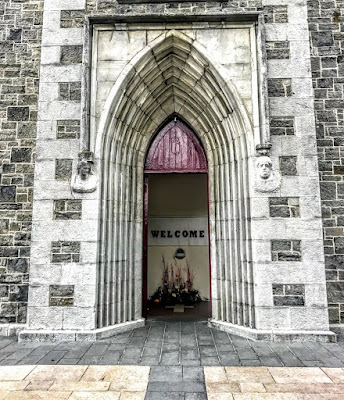 The foundation stone for a new Saint Sylvester’s Church was laid by Daniel Murray (1768-1852), Archbishop of Dublin, in May 1845, when the sermon was preached by the Temperance campaigner, Father Theobald Mathew.

The famine delayed the building project, and when the church was dedicated in July 1846 it was still unfinished. Inside, the interior was gloomy, lit only by a lone window in the north gable (liturgical east end).

The first architect involved in designing the church may have been Michael Hendrick, whose name features regularly in the church building accounts in 1843-1846.

Bolger worked as measurer to the Board of Works, and succeeded Richard Morrison as architect to Trinity College Dublin. In 1832, James Bolger and John Leeson were rival candidates to rebuild Townsend Street Chapel as Saint Andrew’s Church, Westland Row.

His other works include the portico of Saint Paul’s Church, Arran Quay, Saint Audoen’s Roman Catholic Church, High Street, and the church dome in Rathmines. 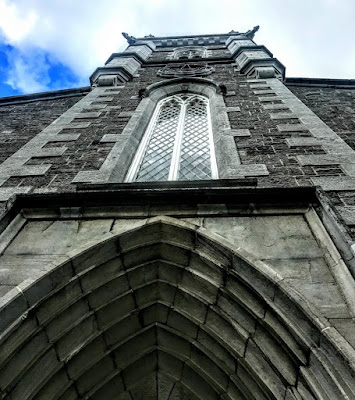 The tower at Saint Sylvester’s was designed by George Coppinger Ashlin and was added in 1899 (Photograph: Patrick Comerford, 2019)

An extensive programme of renovation began at Saint Sylvester’s in July 1858, when a three-light lancet window was inserted in the north gable, lighting the sanctuary, and the church assumed a form that has remained basically the same since then.

However, the parishioners of Malahide were conscious that their church lacked a steeple. A major fund-raising drive was launched in 1899, and within two years an impressive neo-Gothic tower and spire had been added on the southern gable (liturgical west end) to a design by AWN Pugin’s son-in-law, George Coppinger Ashlin. 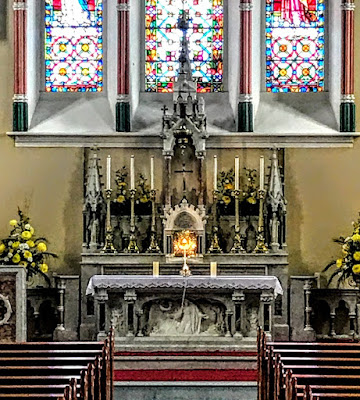 The high altar at Saint Sylvester’s was designed by George Coppinger Ashlin and was sculpted by James Pearse and his son William J Pearse (Photograph: Patrick Comerford, 2019)

The High Altar, consecrated in July 1903, was the gift of an anonymous donor. It was designed by Ashlin and is sculpted in Carrara and Sicilian marble with shafts and inlays of coloured Irish marbles. The altar and was sculpted by William J Pearse, who was executed with his brother Patrick Pearse after the Easter Rising in 1916.

The central panel at the front of the altar depicting Christ’s agony in the garden is the work of James Pearse, father of the Pearse brothers.

The stained-glass windows above the altar are believed to be French and depict the popular piety at the time expressed in devotion to Christ as the Sacred Heart. 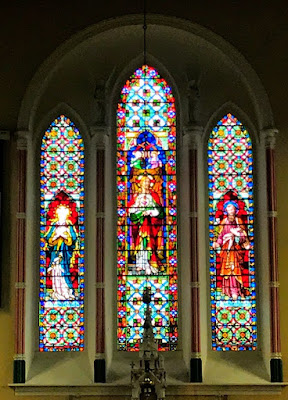 Saint Sylvester’s is built on a north-south axis instead of the liturgically traditional east-west axis. This is a three-bay, gable-fronted church, with a central tower and spire. It has five-bay side elevations, a gable fronted presbytery attached to the north end of east elevation, and a side chapel attached to north end of the west elevation ca 1975. 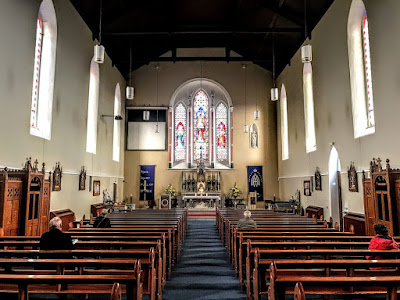 Saint Sylvester’s is built on a north-south axis instead of the liturgically traditional east-west axis (Photograph: Patrick Comerford, 2019)

Inside, the church has a full-height interior that opens into the roof. There are timber fittings, timber galleries, a carved marble altar, and stained-glass windows.

Saint Sylvester’s is built on a north-south axis instead of the liturgically traditional east-west axis With the introduction of liturgical reforms after Vatican II, the internal arrangement of the church was simplified to emphasise the communal nature of the liturgy. Sections of altar rail were removed, and the sanctuary was opened up to the congregation. The two side altars were removed and with them the elaborately-painted reredos on the northern gable or liturgical east end.

The exterior of the church was repaired and renewed in 2012, and a parish centre was added at the west side. 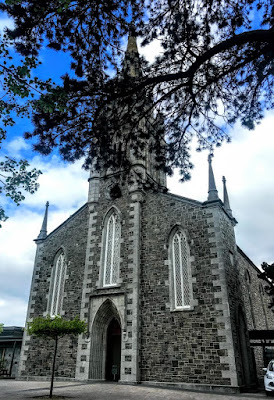 The exterior of Saint Sylvester’s Church was repaired and renewed in 2012 (Photograph: Patrick Comerford, 2019)