‘Communion with Christ and with One Another’ 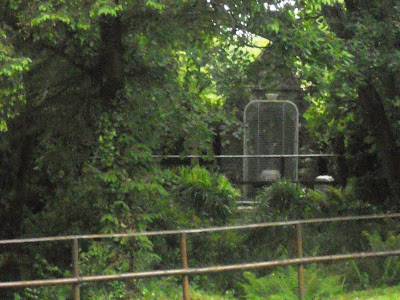 Saint Colmcille’s Well, across a brook and in a coppice of trees at the top of Ballycullen Road (Photograph: Patrick Comerford, 2012)

The Eucharistic Congress this week has as its theme, ‘Communion with Christ and with One Another’.

The speakers from the Church of Ireland at the Congress in the RDS include Archbishop Michael Jackson, while Eimhin Walsh, a student preparing for ordination, is one of the speakers at the conference in Maynooth.

How the atmosphere and culture surrounding Eucharistic Congresses have changed so much.

In 1932, the Eucharistic Congress left an impression for generations that many had a vision for an Ireland that was exclusively Green, Gaelic and Catholic.

At the same time, in the Church of Ireland, we were celebrating our Irishness by marking the fifteen-hundredth anniversary of Saint Patrick’s supposed arrival in Ireland in the year 432.

While special processions were being organised by our neighbours, we were busy erecting special stained glass windows in churches and cathedrals throughout the Church of Ireland.

Yet, gathered here at this holy well, with its association with one of three great patron saints of Ireland, we have here reminders that we share, as the Apostle Paul says, One Lord, One Faith and One Baptism (Ephesians 4: 5).

The waters of baptism incorporate us into the Body of Christ. If there is one Lord, one Faith and one Baptism, then we are one, and any divisions we have are put there, not by Christ, not by our shared saints of the past who proclaimed one faith, but they are put there by us.

And if we have put those divisions in place, then we have the potential, indeed we have the duty and the responsibility, to tear them down.

Yesterday was the Feast of Saint Columba or Saint Colmcille.

Two days earlier, it was the Feast of Corpus Christi on Thursday.

But on Thursday evening, we prayed for our Christian brothers and sisters taking part in the Eucharistic Congress, and we also sang those words from William Turton’s hymn:

… O may we all one Bread, one Body be,
Through this blest sacrament of unity.

So, Lord, at length when sacraments shall cease,
May we be one with all thy Church above.

This weekend, as I watched pilgrims beginning their walk around Dublin churches, beginning at Saint Ann’s, the Church of Ireland parish church beside the Mansion House in Dawson Street, I realised how many steps we have taken towards making that dream a reality, towards walking with one another in the pilgrimage of life.

But that goal of unity in the Eucharist is not for our own pious pleasure and blessed benefit. It is urgent for the sake of the mission of the Church.

Many years ago, Bishop Frank Weston told the Anglo-Catholic Congress in 1923: “I say to you, and I say it with all the earnestness that I have, if you are prepared to fight for the right of adoring Jesus in His Blessed Sacrament, then, when you come out from before your tabernacles, you must walk with Christ, mystically present in you through the streets of this country, and find the same Christ in the peoples of your cities and villages. You cannot claim to worship Jesus in the tabernacle, if you do not pity Jesus in the slums … It is folly – it is madness – to suppose that you can worship Jesus in the Sacraments and Jesus on the throne of glory, when you are sweating him in the souls and bodies of his children.”

In our earlier reading from the Second Letter to the Corinthians, Saint Paul reminds us that we share the same faith, the same scripture, and the same hope for our shared future.

As the Church, we are expected to be signs of the kingdom. But we are reminded by Christ in our Gospel reading, just as he is about to eat, that “if a kingdom is divided against itself, that kingdom cannot stand” (Mark 3: 24)

And there cannot be two bodies of Christ.

Our inability to share the Eucharist today is not a visible sign, a sacrament, of our hope for the future.

The Eucharist is the sacrament of unity.

But it is also a sacrament of the mission of the Church.

As we see at this well this afternoon, we share the one apostolic faith handed down by Saint Colmcille or Saint Columba and the saints of Ireland.

As we see at this holy well this afternoon, we share the same water, the water of baptism.

But the sacrament of Christ still divides us.

Yet, which is more important?

The story of Colmcille?

Or the sacrament of Christ? 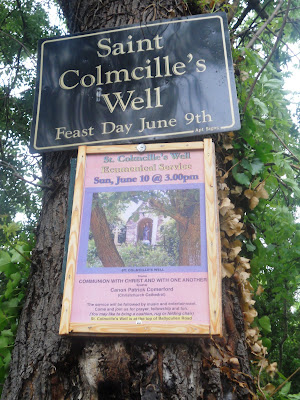 A poster advertising this afternoon’s ecumenical service at Saint Colmcille’s Well, a day after his feast day (Photograph: Patrick Comerford, 2012)

Canon Patrick Comerford is Lecturer in Anglicanism and Liturgy, the Church of Ireland Theological Institute, and a canon of Christ Church Cathedral, Dublin. This sermon was preached at annual ecumenical service at Saint Colmcille’s Well, Ballycullen Road, Dublin, on Sunday 10 June 2012.