Lichfield Council comes to hear Leonard Cohen ... or does it? 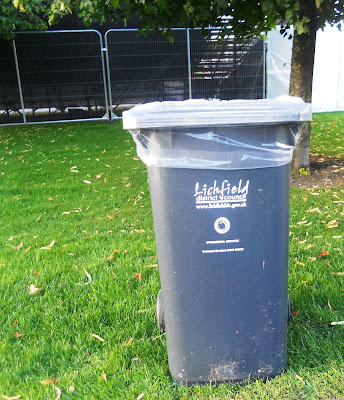 One the many black bins from Lichfield District Council at the Leonard Cohen concerts in Dublin this week (Photograph: Patrick Comerford, 2012)

Following the release of his twelfth studio album Old Ideas last January, he returned to the stage last month with a World Tour that began in Belgium on 12 August in Saint Peter’s Square, Ghent, and then moved on to Amsterdam (21 August).

From Dublin, he goes on next week to Istanbul (19 September) and Bucharest (22 September), .and then he goes on to Verona, Toulon, and Paris for dates throughout September.

His two shows in England were moved last weekend (8 and 9 September) from Hop Farm in Kent to the Wembley Stadium in London.

Cohen speaks regularly about the influence of WB Yeats on his poetry and thoughts. But Lissadell does not feature on this year’s itinerary.

Nor does Lichfield, for that matter. But Lichfield came to hear Leonard Cohen this week ... well ,in a form.

On my way through the grounds of the Royal Hospital in Kilmainham for the first of Leonard Cohen’s concerts in Dublin this week, I noticed most of the black bins belonged to Lichfield District Council.

What were they doing there?

Did some home have too many black bins, and sent them on tour with Leonard Cohen?
Has Lichfield District Council got a contract with Dublin?

Or with Leonard Cohen?

I just wondered ... although not for long.