The covered balconies of Rethymnon:
a unique part of Ottoman architecture 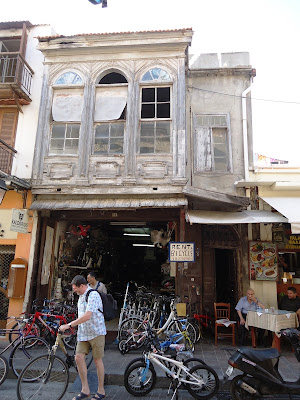 The once-elegant balcony above the bicycle shop on Paleologou Street is a unique piece of Rethymnon’s architectural heritage but is in danger of being lost (Photograph: Patrick Comerford, 2013)

Many elegant houses built in the Venetian and Turkish styles still survive in Rethymnon, and in the narrow streets and alleys, some of these houses have elegant, propped wooden kiosks jutting out over the street from the floor above ground level.

This is an architectural feature that can be seen in other parts of Greece that were once under Ottoman rule, particularly in Thessaloniki. It was first introduced from other parts of the Balkans, perhaps from the 18th century on. But these kiosks are not found with the same frequency nor with the same elegance on the rest of Greece as they are found in Rethymnon.

Rethymnon has about six dozen of these overhanging covered balconies or kiosks, stealing away a little extra covered space on the first floors of houses in the narrow streets. Sadly, although some have been restored in recent years, others are dilapidated and decaying, and when I set out in search of the balconies one morning this week, I found that had at least two had disappeared and are another lost element in the heritage of Crete.

These kiosks, known in Greek as xostego or as sahnisia are projecting bay windows on the upper stories of old Ottoman houses. The Greek word sahnisia seems to be is derived from the Persian şah nişi, meaning “the shah’s throne.”

But these balconies were the thrones neither of Persian shah’s nor of Turkish beys. Instead, it is said, they were built so that the wives of prosperous Muslims could sit in the sun and watch all that was going on below without being seen by people on the streets – a Turkish form of purdah, I imagine.

They consist of a timber frame filled with small rubble or mud mortar, which is called bagdati in Turkish. The wall is then plastered with rich plaster and then covered with a timber trellis with lattice work.

Generally, the kiosks are supported by wooden struts or cantilevers known as direkia or fourousia, although some also rest on stone corbels. 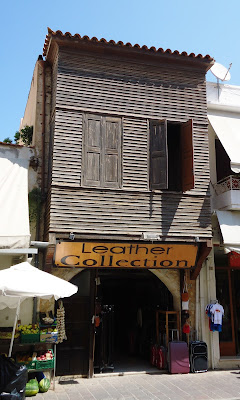 The greatest number of surviving hanging balconies is on Arkadíou Street, the long shopping street that runs through the town from one end to the other, parallel with the seafront, with at least seven of these unique constructions.

At first sight, the balcony above the Metaxa shop at 168, on the corner of Kornarou Street, looks pristine. But on closer inspection it is in a perilous state, with the floor collapsing at the northern end, and pigeons making a home in the overhanging eaves. The wooden two-storey covered balcony at 186 Arkadíou Street was in a poor state of disrepair for many years, but has been restored carefully, with attention to detail, in more recent years. 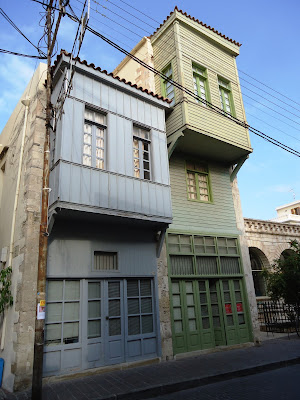 Carefully-restored, paired balconies at 214 and 216 Arkadíou Street, between Vafe Street and the Loggia (Photograph: Patrick Comerford, 2013)

The covered balconies at numbers 214 and 216 form an interesting pair, squeezed between the corner of Vafe Street and the Loggia, one a storey higher than the other, so that one wonders how the side window in No 216 was ever opened. 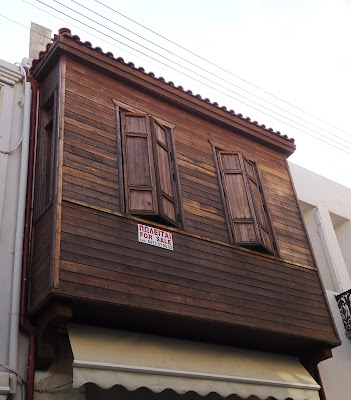 A balcony for sale at No 243 Arkadíou Street (Photograph: Patrick Comerford, 2013)

And if you fancy owning your own piece of Cretan architectural heritage, then at the moment No 243 has a “for sale” sign outside. 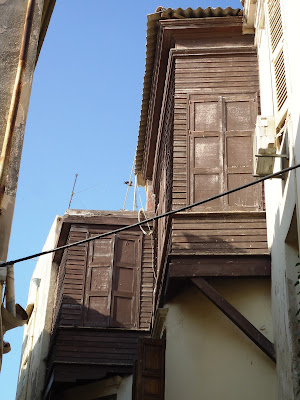 A covered balcony in two sections on the corner of Arkadíou Street and Vlastoú Street (Photograph: Patrick Comerford, 2013)

On the corner of 92 Arkadíou Street and Nos 1,3 and 5 Vlastoú Street, there is a covered balcony in two sections above the entrance to the Zenia Hotel. This was a clever solution to a problem posed by the interior layout of the house.

The second largest collection of surviving hanging balconies is on Arabatzoglou Street (once known as Thessaloníki Street), where I found five kiosks above street level at numbers 13, 23, 27, 33 and 69.

The kiosk at No 27 Arabatzoglou Street is, perhaps, the most interesting, with its characteristic Turkish planking. The house stands opposite the Punch Bowl, the town’s only Irish pub. 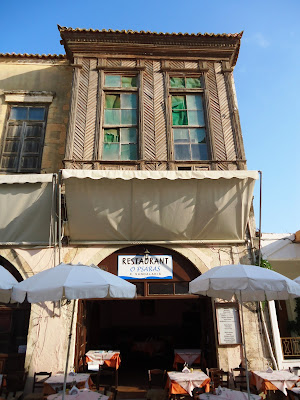 A balcony with a view of two streets and a square (Photograph: Patrick Comerford, 2013)

The balcony above O Psaras restaurant at No 69 at the top of Arabatzoglou Street, at the junction with Nikiforos Fokas Street (once known as the Long Alley), gave the inhabitants of the house a view down both streets and allowed them to see all that was happening in the tiny square below in front of the mosque that had once been a Dominican church and once again became a Church in 1917, dedicated to the Virgin Mary.

What has been described as “a rather inelegant” covered balcony at No 20 Reniéri Street, faces down into Klidí Street. At No 6 and 8 Klidí Street, there are two paired balconies on neighbouring houses, but at different elevations. 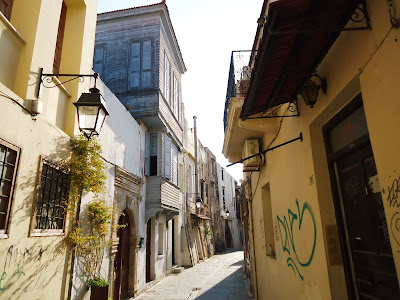 On Vernárdou Street, there are balconies at Nos 35 and No 45. No 45 has a two-storey covered balcony, while No 35 is one side of a house that has two balconies: the balcony on Vernárdou Street is beside a modern balcony with pretty flower pots; the second balcony is around the corner on Epimenidou Street but still on the same house. 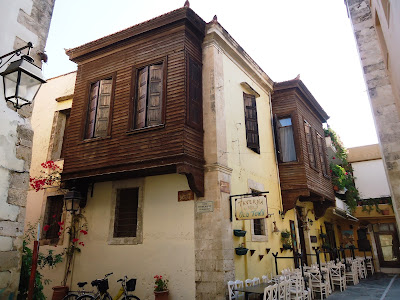 Two kiosks and one house: on the corner of Epimenidou Street and Vernárdou Street (Photograph: Patrick Comerford, 2013)

Many kiosks gave the residents of a house views down a full street. A covered, three-bay balcony on a house on Paleologou Street has a magnificent view across Petihaki Square; the Centre for Byzantine Art, which is a majestically restored Venetian-Ottoman mansion, has a large balcony with views down Tsouderon Street, where I am staying, and along both sides Ethnikis Antistasseos Street. The balcony at the Vetera Hotel looks out onto Mitropolis Square (Cathedral Square).

There are other kiosks can be seen on houses on Petihaki Square, Nikiforos Fokas Street, Koronaiou Street, Kritovoulidou Street and on Papaioannou Square.

These balconies are a threatened part of the architectural heritage of Retymnon. On Kornárou Street, there was once a covered balcony at No 26, supported on four wooden corbels. At 36 Patriárchou Grigoríou, the house once had a covered balcony supported on stone corbels. However, when I went in search of them this week, neither the balconies nor the stone and wooden corbels were there any longer, and the houses were in advancing stages of disrepair.

Many of the covered balconies are now used for storage or lay empty. The once elegant balcony above the bicycle shop on Paleologou Street, shows years of neglect, with pigeons flying in an out between the timbers. Without remedial care and attention, another unique piece of Rethymnon’s cultural heritage may soon be lost.

But these balconies are also an interesting architectural example of the way Ottoman and Venetian architecture intersected, and even an example of how domestic architecture can make a cultural contribution to Christian-Muslim dialogue.

Posted by Patrick Comerford at 07:09 No comments: