Fading summer sunshine and fading
sunflowers in a regency garden 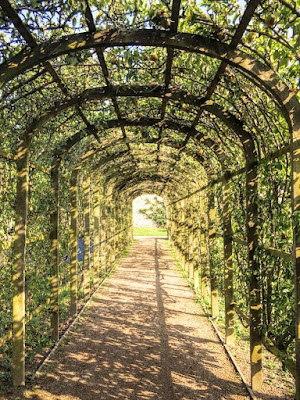 It was such a beautiful, sunny afternoon, that it felt like summer was making a brave effort to return despite the autumn winds and rains that have been blowing through every other day in the past week.

It was an opportunity not to be missed.

After a busy working day, two of us decided to leave work a little early, and after mid-afternoon double espressos in the Wicklow Way Café we went for long walks in the afternoon sunshine in Marlay Park. 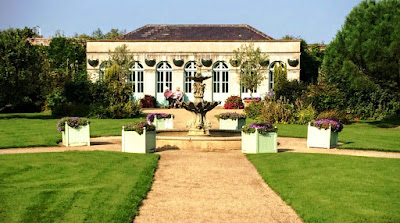 In the Regency Gardens in Marlay Park this afternoon (Photograph: Patrick Comerford, 2016)

We walked through wooded glades, past ‘Goldilocks Cottage,’ across the open parkland, and by the old La Touche family house, before ending up eventually in the Regency Gardens.

In the walled courtyard behind the café there, a collection of white and multi-coloured peahens and peacocks were playfully distracting and entertaining the coffee-drinkers. 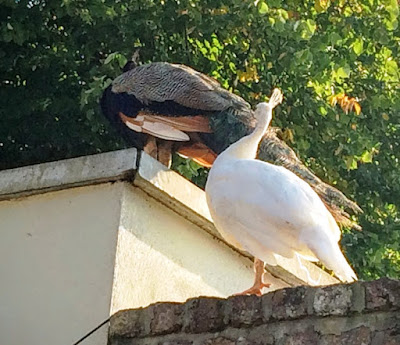 In the walled Regency Gardens, the sunflowers were at varying stages: in full bloom, beginning to fed, and turning to seed. The bees were enjoying them, and thought you might like these photographs of them too. 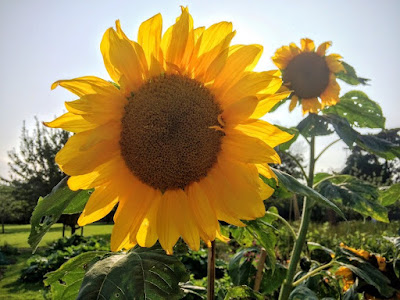 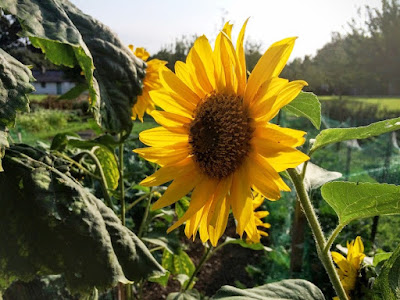 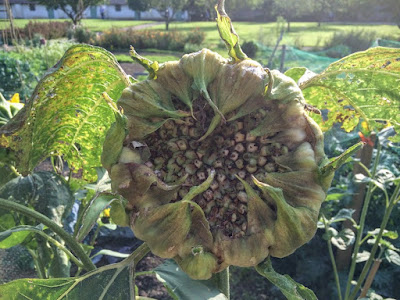 The neighbouring Methodist and Presbyetrian
churches in Carlow have overlapping histories 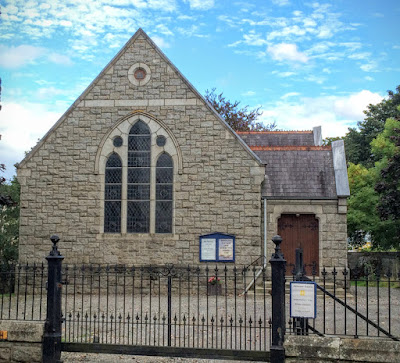 During my visit to Carlow last weekend, I noticed how the Methodist Church on Athy Road, Carlow, and the Presbyterian Church across the street are neighbouring churches with two very different churches in architectural style. Yet the story of these two neighbouring congregations overlaps at times.

When I was growing up in the south-east Ireland, well-known Methodist family names in Carlow included Shaw, Hadden and Good. Methodism may have been first introduced to the town by junior officers in the garrison. However, Carlow was sufficiently important a town for John Wesley’s preachers to realise its strategic importance, and John Wesley, who first visited Ireland in 1747, visited Carlow six times in the years that followed: 1765, 1767, 1769, 1771, 1781 and 1789.

The early Methodists in Carlow first met was a disused Huguenot church. This was a very small building that had been built for the non-conforming Huguenots who had settled in he town. The church stood at the end of a narrow passage from Tullow Street, bounded at one end by Cockpit Lane.

John Wesley’s visits to Carlow facilitated a growth in the number of Methodists in the town, but this growth soon created a problem for they quickly outgrew the old Huguenot church they were using and it was no longer large enough for them.

The Methodists found it difficult to get a site to build a new church, and eventually they leased a site in Meeting House Lane, now Charlotte Street. The old Quaker meeting house had been been leased by the trustees of the Quakers of Carlow in 1784 to James Delahunty, and he transferred the lease to the Methodists.

A new chapel was built on the site and was completed by the end of 1787. Three years later, in 1790, the Methodist Conference established the Carlow circuit, which embraced all Co Carlow, the greater part of Co Kilkenny and part of Co Tipperary.

At times in the 19th century, the Methodists used the newly-built Prebyterian or Scots’ Church in Athy Road. But when the lease on the site in Charlotte Street was beginning to run out, the Methodists in Carlow found they could not renew it on favourable terms. In 1892, a site for a new chapel was secured on Athy Road, behind the Courthouse.

The site had been a quarry site and needed to be filled before building could begin. It was filled in a remarkable way and at a remarkable cost. At the time, some buildings were being demolished in Carlow town, and the new site was on Athy Road was only half as far from the buildings as the place where the rubble was about to be dumped. The Methodists agreed to pay the carters one penny for each load they dumped at the site, their journey was halved, and the site was filled for a total outlay of £5.

The new church was designed by the Belfast-based architect John James Phillips (1841-1936). Phillips was born in Cork City in 1841 or 1842, and his early architectural career is not recorded. His name begins to appear in the Irish Builder and other architectural journals in the mid-1870s, at first in connection with his antiquarian interests and the publication of his monograph, St Mary’s of Grey Abbey, County Down, Ireland, as existing in the year AD 1874 (1874). Around the same time, he published drawings by him of Kilkenny Cathedral, Jerpoint Abbey and Inch Abbey, Downpatrick, in the Irish Builder, and in 1879 he exhibited a view of the Hotel de Bourgtheroude, Rouen, at the Royal Hibernian Academy.

In the 1870s, Phillips was involved with the Belfast Architectural Association. In 1875, he designed a pastoral staff for the Bishop of Down and Connor, in 1877 he redecorated the interior of Saint Mark’s Church, Ligoniel, Belfast, and in 1882 he designed a Gothic memorial to his family in the Falls Road Cemetery, Belfast.

Phillips may have received his architectural training in the office of John Lanyon, but no buildings of his own are recorded until 1884, when he designed the Methodist church at Letterbreen, Co Fermanagh. From then until the early 20th century, he was the architect of large number of Methodist churches in Ireland, including at least 17 in Belfast and the northern counties and two in Dublin. These include the Methodist churches in Agnes Street, Ballynafeigh, Blackstaff Road, Duncairn Gardens, Ligoniel Road, Osborne Park and Sandy Row, Belfast, Abbey Street, Armagh, Hamilton Road, Bangor, Ballymoney Road, Ballymena, and Glenavy, Co Antrim, and Charleston Road, Rathmines, and Brighton Road, Rathgar, in Dublin.

Meanwhile, the cost of the new Methodist church in Carlow was estimated at £2,600. The Revd James Martin Hill, who was appointed to the Circuit by the Methodist Conference in 1892, set about raising funds.

Building work on the new chapel began in the early months of 1897. The buildings included a chapel and adjoining a lecture hall, with a basement that would serve as a tea room or Sunday School room, with a store and a heating chamber. The external work was of ‘fine grey granite, finely axed and tooled.’ The building work continued for just over a year and the opening services were held on Friday 15 April 1898.

Carlow Methodists have continued to worship in this church for over a century. On 15 April 1998, they celebrated their centenary with a celebration service and the launch of a history of Methodism on the Carlow circuit, Asses, Colts and Loving People, by the Revd DA Levistone Cooney.

More recently, the basement has been used by Carlow Historical Society for storing its records. The present minister is the Revd Paul Maxwell, who was stationed to the Methodist churches in Carlow and Kilkenny last year [2015]. 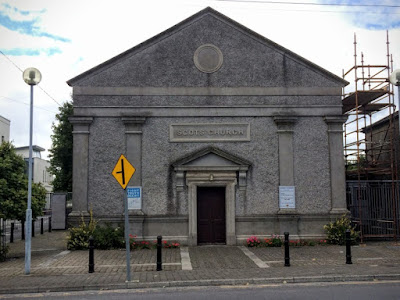 The Scots’ Church was designed by Thomas Alfred Cobden, who also designed the Roman Catholic cathedral and the Church of Ireland parish church (Photograph: Patrick Comerford, 2016)

Across the street from the Methodist Church, the Presbyterian Church on Athy Road in Carlow is known locally as Scots’ Church. This church, which was opened for worship by the Rev James Homer in 1819, was designed by Thomas Alfred Cobden, the architect who also designed the Roman Catholic Cathedral and the Church of Ireland parish church in the town ... perhaps an unintended but nevertheless interesting contribution to ecumenism and dialogue in pre-ecumenical times.

This early congregation had died out by around 1750. Thomas Cox, a businessman in Carlow, was instrumental in the re-establishing of a Presbyterian congregation in Carlow 1816. He was from Hampshire and lived at Barrow Cottage (Evergreen Lodge) and was a prosperous bacon and butter merchant in Northcote Avenue, now known as Cox’s Lane, Carlow.

At first, these Presbyterians used the Methodist Church in Charlotte Street as their place of worship. But the impetus to build a new Presbyterian church in the town was stimulated by the Revd Henry Cooke, when he conducted services in Carlow in 1818, and the town’s Presbyterians decided to build their own church.

The new Presbyterian church was designed by Thomas Cobden (1794-1842), who designed many public buildings, private residences and churches in the Co Carlow, Co Wexford and Co Waterford, including the Cathedral of the Assumption in Carlow, Saint Mary’s Church of Ireland parish church in Carlow, and the Church of the Holy Cross in Killeshin.

Cobden appears to have been a son of Thomas Cobden, a builder in Chichester, who built Chichester Market House with William Brooks in 1807. Thomas Alfred Cobden was baptised on 8 July 1794 at an independent chapel in Chichester in 1794 and he came to work in Ireland is still unknown.

In 1814 and 1815, he prepared designs for Gurteen le Poer, Co Waterford, for John William Power and in 1819 he drew up a classical scheme for Wells House, Co Wexford, for Robert Doyne. Between 1835 and 1842, he exhibited several designs for buildings in Ireland at the Royal Academy and the Royal Hibernian Academy. Only his stables were built at Gurteen Le Poer, but he also designed the tower of Downpatrick Cathedral.

The rest of his work in Ireland seems to have been in Co Carlow and Co Wexford. His clients included John Dawson Duckett, William Duckett, Robert Clayton Browne, General Robert Browne Clayton, Thomas Elrington, Bishop of Ferns, and Robert Tottenham Ponsonby Loftus, Bishop of Clogher. He worked for for John Dawson Duckett on Duckett’s Grove, Co Carlow, and his other designs include Braganza for Colonel Sir Dudley Hill, later the bishop’s house in Carlow, Coblemon Hall, Co Wexford, and the rebuilding of Saint Mary’s Church of Ireland parish church in Carlow.

Cobden was a Presbyterian and he designed the Scots’ Church as a three-bay hall with semi-circular headed windows. The estimate for building was £800. The foundation stone was laid by Mr E Butler, Sovereign (Mayor) of Carlow on 18 June, 1818, and a gallery was added at a cost of £120.15s.3d.

The church was opened for worship by the Revd James Homer of Dublin on 12 September 1819. The first minister was the Revd James Morgan (1820-1824), who was ordained for Carlow on 21 June 1820. Morgan was a close friend of Cooke and later served the Presbyterian Church in Fisherwick Place in Belfast, and was Moderator of the General Assembly in 1846.

After Morgan, short ministries followed, and the first 12 ministers covered a period of only 75 years. The Revd Warrand Carlile resigned as Minister in Carlow on 1 November 1842 to become a missionary in Jamaica with the Scottish Missionary Society.

An early division arose when Dr Mahary withdrew from the congregation because of its adherence to Calvinistic principles. Thomas Cobden succeeded him as treasurer. Cobden lived for a time in College Street, Carlow. In later years, he retired to London, and from 1832 he was living at 14 Upper Clapton Terrace, Hackney, where in 1842 at the age of 48.

As for Thomas Cox, his business failed in Carlow and he moved to Clonmel, Co Tipperary. There he was also involved in the local Presbyterian Church. When he died on 2 August 1847, he was buried in Saint Mary’s churchyard in Clonmel.

Meanwhile, the Scots’ Church in Carlow underwent major refurbishment in 1900 between the ‘double ministry’ of the Revd Robert Bailey, from 1887 until 1891 and for six months in 1914.

The church had its own minister until the Revd James Black retired on 31 December 1936. The congregation in Carlow was then united with the Presbyterian congregation in Athy, Co Kildare. In 1993, it was designated a Home Mission Development Scheme. The present minister is the Revd Stephen Rea. 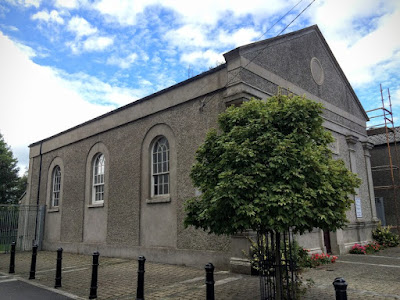 The Scots’ Church in Carlow is a three-bay hall with semi-circular headed windows (Photograph: Patrick Comerford, 2016)