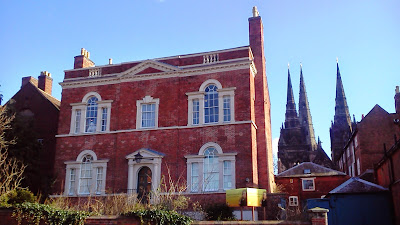 I was searching recently for any connections between Ralph Vaughan Williams (1872–1958) and Staffordshire. The composer’s maternal grandmother, Caroline Sarah Darwin, was the eldest sister of Charles Darwin, and so she was a grand-daughter of Erasmus Darwin of Lichfield, as well as being descended from the Wedgwood family.

The Squire of Tamworth or Dog and Gun is a popular song with a fine romantic story. It is traditionally reported to be based on an incident during the reign of Queen Elizabeth I. Robert Bell writes in Songs of the Peasants that “it is traditionally reported to be founded on an incident which occurred in the reign of Elizabeth.”

However, the suggestion that this song tells the story of an incident in Elizabethan times is made in Dixon’s Songs of the Peasantry (1846).

It has been published in broadside form since the early 18th century, but is much, much older. There is evidence that it was known to traditional singers for at least 250 years. Timothy Connor, a prisoner of war in England during the American War of Independence, included this song in a songbook he compiled while he was a prisoner in 1777-1779.

Since then, the song has been printed by many broadside printers, and has been widely collected in both England and America. It appears in Dixon’s Ancient Poems Ballads and Songs in 1846.

There are 234 records of Golden Glove in the Vaughan Williams Memorial Library, collected all over England by collectors including Frank Kidson, Mike Yates, and Cecil Sharp. It was collected by Sabine Baring-Gould in Devon in 1893, by Vaughan Williams in Ingrave, near Brentwood in Essex in 1904, and by Clive Carey in Treyford, Sussex, in 1912.

In late 1903, a year before he found this tune in Ingrave, Vaughan Williams discovered the folk song Bushes and Briars at Ingrave. The impact of that discovery was profound and permanent, influencing the texture, contours and melodies of his work as editor of the English Hymnal from 1904 on and on his other work.

His orchestral works written shortly after hearing Bushes and Briars – In the Fen Country and the Norfolk Rhapsodies, for example — are wonderfully atmospheric.

When Charles Potiphar sang Bushes and Briars to the composer at Ingrave on 4th December, 1903, the soul of Vaughan Williams was charged with the energy of England's musical past. This, of course, was Vaughan Williams's legendary 'moment of epiphany' and he went on to collect some 810 songs over the next 10 years or so. But I am surprised that the tune of The Squire of Tamworth, The Golden Glove or Dog and Gun was not adapted for any hymn settings.

The folksong continued to be sung not only in Staffordshire but throughout England in the 20th century. In 1973, Muckram Wakes sang The Squire of Tamworth on their first album, A Map of Derbyshire. Later, Frank Hinchliffe sang The Golden Glove in 1976 at home in a recording by Mike Yates and Ruairidh and Alvina Greig. This was published in 1977 on his Topic LP In Sheffield Park: Traditional Songs from South Yorkshire.

A live recording by Shirley Collins in 1981 is included in her four CD anthology Within Sound. A year later, Sally Barker sang The Golden Glove on her CD Tango! (1992).

In March 1997, Fairport Convention played The Golden Glove with Sally Barker’s tune live at Canterbury Marlowe Theatre. This recording was included a year later on their CD Who Knows Where the Time Goes.

Damien Barber learned The Golden Glove from Nic Jones’s album and recorded it for his own album, The Furrowed Field, in 2000. John Spiers and Jon Boden sang Golden Glove on the CD, Through & Through (2001), and Jon Boden also sang it in 2010 in his project ‘A Folk Song a Day.’

Ruth Notman learned The Squire of Tamworth from a Will Noble CD and recorded it in 2009 for her second CD, The Life of Lilly.

Jim Moray recorded The Golden Glove for his CD Skulk in 2012, when Hannah James and Sam Sweeney also sang the song on their second duo album, State and Ancientry.

Hannah James said then she heard this song being sung by Cuthbert Noble at the Shepley Folk Festival, and linked the song back to Vaughan Williams.

Lyrics as sung by Nic Jones

Oh it’s of a young squire in Tamworth we hear
And he courted a nobleman’s daughter so fair.
And all for to marry her it was his intent;
And the friends and relations they’d given their consent.

And she turned from the squire but nothing she said,
But instead of getting married she took to her bed.
And the thoughts of the farmer so ran in her mind,
A way for to have him she quickly did find.

Coat, waistcoat and trousers the young girl put on
And away she went a-hunting with her dog and her gun.
And she hunted around where the farmer he did dwell
Because in her heart, oh, she loved him right well.

And she oftentimes fired but nothing she killed
Until this young farmer came into the field;
And for to talk with him it was her intent
And with her dog and her gun then to meet him she went.

“Oh I thought you would have been at the wedding,” she cried,
“For to wait on the squire and to give him his bride.”
“Oh no,” said the farmer, “I’ll take a sword in my hand.
By honour I’d gain her whenever she command.”

And the lady was pleased when she heard him so bold
And she gave him a glove that was made out of gold;
And she told him that she found it she was coming along
As she went out a-hunting with her dog and her gun.

And this lady went home with a heart full of love
And she gave out a notice that she’d lost her glove
And, “Whoever found it and he brings it to me,
Whoever he is then my husband shall be.”

The farmer he was pleased when he heard of the news
And with a heart full of love to the lady he goes.
“Oh lady, oh lady, I’ve picked up your glove,
And I hope that you’ll be pleased for to grant me some love.
”
“Oh it’s already granted, I will be your bride,
For I love the sweet breath of the farmer,” she cried.
“I’ll be mistress of your dairy and I’ll milk all your cows
While my jolly old farmer goes whistling on his plough.”

And it’s when they got married and they told of the fun
How she’d gone out a-hunting with her dog and her gun.

The Moat House, Tamworth … but was there ever a Squire of Tamworth (Photograph: Patrick Comerford)

If the song does not date back to Elizabethan times, then there is no point in speculating about who the Squire of Tamworth was and dreaming about any connections with the Comberford family of the Moat House.

However, I am still in search of any evidence of Vaughan Williams returning to see Erasmus Darwin’s house in the Cathedral Close, and any evidence of his use of Staffordshire folk tunes as settings for hymns.