‘Renew us for life and
peace, gladness and joy,
salvation and consolation’ 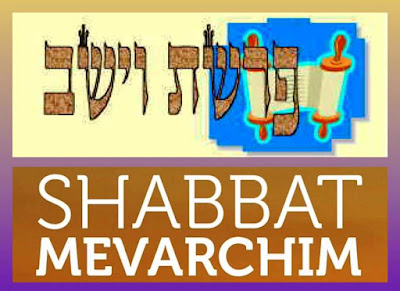 In Jewish spirituality, every Shabbat blesses the week that follows it. The spiritual work on the day of rest fills is seen as providing blessings for the six days that follow.

Once a month, however, the prayers also include petitions for blessings for the month ahead. The Shabbat before the start of a Jewish month, Rosh Chodesh, is known as Shabbat Mevarchim, ‘the Shabbat of blessing.’ The word mevorchim means ‘they [the congregation] bless [the forthcoming new month].’

During the synagogue service on this Shabbat morning, a special blessing is invoked on the new month and announce the timing of Rosh Chodesh is announced. The new month of Sivan begins next Wednesday (15 May 2021).

Part of this brief ceremony is a beautiful prayer with many important blessings and requests — both physical and spiritual —for the coming month.

On Shabbat morning, after the Torah reading, the chazzan or cantor holds the Torah scroll in his or her arms, and this prayer, beginning with the words yehi ratzon (‘May it be your will’), is said:

May he who performed miracles for our ancestors and redeemed them from slavery to freedom, redeem us soon and gather in our dispersed people from the four corners of the earth, so that all Israel may be united in friendship, and let us say, Amen.

Then these words are said:

The new month of [the Hebrew month] will occur on [the Hebrew day/s]. May it come to us and all Israel for good.

The congregation and leader pray:

May the Holy One, blessed be He, renew this month for us and for all his people, the house of Israel, for life and peace, gladness and joy, salvation and consolation; and let us say, Amen.

The prayer beginning ‘May it be your will’ is based on the meditation of the third century scholar Abba Arikha (Rav). The phrase ‘so that all Israel may be united in friendship’ is derived from the rabbinic interpretation of Psalm 122: 3, ‘Jerusalem built as a city joined together,’ as ‘a city that turns all Israel into friends.’

This prayer is said after the Torah reading and before the Torah scroll is carried back to the Aron haKodesh or Torah ark. 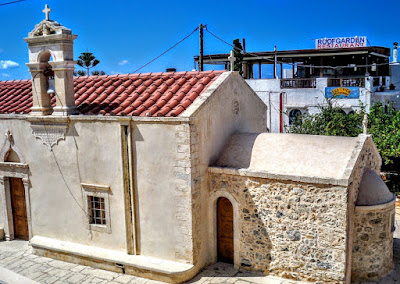 The Church of Aghios Vasilios in Koutouloufári dates from the 14th century (Photograph: Patrick Comerford)

Until the pandemic lockdown, I have been visiting Crete almost every year since the 1980s. My photographs this morning (7 May 2021) are from the 14th century, Byzantine church of Aghios Vasilios (Αγιος Βασίλειος, Saint Basil) in Koutouloufári (Κουτουλουφάρι), the neighbouring village of Piskopianó (see 5 May 2021), in the mountains above Hersonissos.

I have been visiting Crete regularly since the 1980s, and I first visited Koutouloufári in 1994, when I was staying in nearby Piskopianó, and have returned many times since.

The church in Koutouloufári dates from the 14th century, but it was extended and rebuilt in 1811 and again in 1840, incorporating parts of the smaller church built many centuries before. The woodcut iconostasis dates from 1850. The priest is Father Michael Agapakis

Ancient maps and records indicate that there has been a settlement in the Koutouloufári area for hundreds of years. However, local historians say the present village has its beginnings in the Byzantine period after a severe earthquake that destroyed the settlement where the port of Hersonissos now stands. The residents moved east to a new settlement, close to where the Hotel Nora now stands, and they named this settlement Zambaniana.

On reaching the church of Saint Basil, they told a local priest named Koutifari what had happened. Father Koutifari gave them land around the church to build a new village, and they named it Koutouloufári in his honour.

Koutouloufári was almost deserted by the 1970s, with only 150 inhabitants left in the village, and up to 1980, the inhabitants of Koutouloufári were mainly farmers. However, the development of tourism on the northern coast of Crete brought investment and work to the area and the population grew once again. The new prosperity also attracted city people who bought old houses Koutouloufári and restored them.

The village of Koutouloufári remains a fine example of a Cretan hill village, with its narrow streets following the contours of the hill. There are some fine buildings of architectural note, with multi-arched buildings. Oil and wine were produced and farm animals were sheltered on the ground floors, while families slept on a raised loft or upper floor if one existed. Most of these buildings are stone-built, with the minimum of dressing. 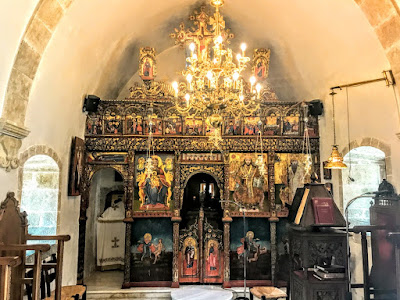 Inside the Church of Aghios Vasilios in Koutouloufári, in the mountains above Hersonissos (Photograph: Patrick Comerford) 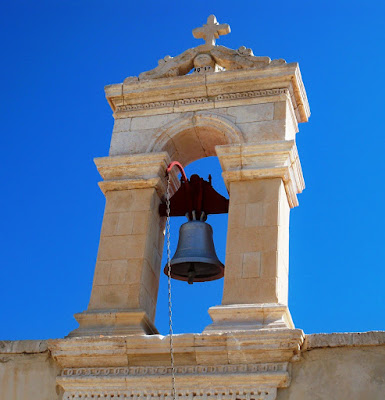 The bell of the Church of Aghios Vasilios in Koutouloufári in Crete (Photograph: Patrick Comerford)

The Prayer in the USPG Prayer Diary today (7 May 2021) invites us to pray: 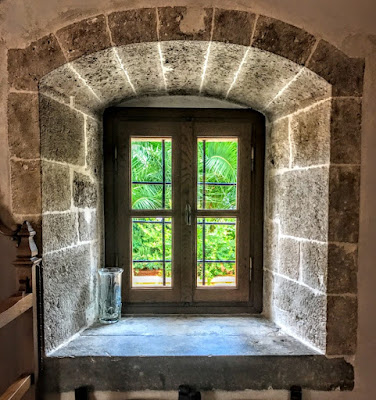 Morning sunshine in the Church of Aghios Vasilios in Koutouloufári (Photograph: Patrick Comerford) 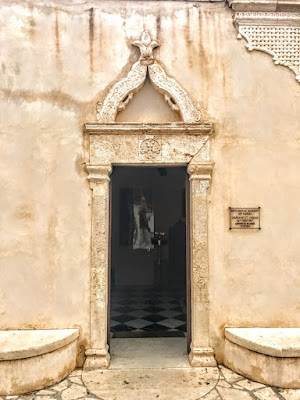 The Byzantine doorframe in the Church of Aghios Vasilios in Koutouloufári, dating from the 14th century (Photograph: Patrick Comerford)