A walk along the shore at dusk
in mediaeval Carlingford 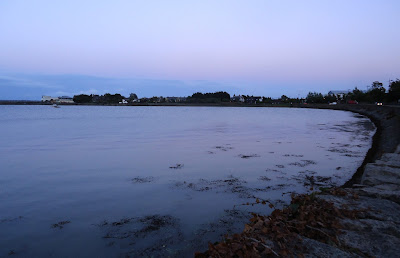 Dusk on the shores of Carlingford (Photograph: Patrick Comerford, 2013)

On the way back from Belfast to Dublin on Sunday evening, we broke the journey halfway at Ballymascanlon, and left the M1 for a walk and a meal in Carlingford, on the shores of Carlingford Lough and beneath the slopes of Slieve Foy on the Cooley Peninsula in north Co Louth.

Carlingford is full of character and claims to be one of the best preserved mediaeval villages in Ireland. The Vikings may have had a sheltered harbour and a temporary base in Carlingford Lough in the eighth and ninth Centuries, although there are no records to support this and the only evidence to support this claim is the name Carlingford (Old Norse, Kerlingfjǫrðr, “narrow sea-inlet of the hag”). 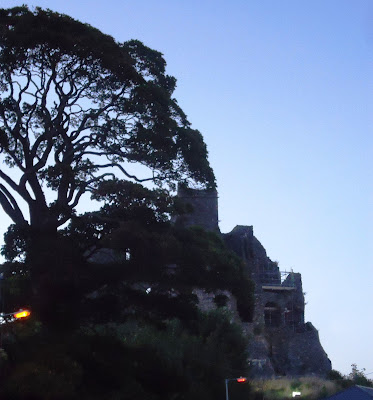 In the 1180s, the Anglo-Norman adventurer Hugh de Lacy laid the foundations for a castle on a strategic outcrop of rock. But the castle became known as King John’s Castle after King John visited Carlingford in 1210.

A town quickly grew up under the shadows of the castle, and because of its strategic position Carlingford quickly became a thriving port.

Although the town was burnt to the ground by a Scottish raiding party in 1388, Carlingford enjoyed mercantile prosperity in the 14th, 15th and early 16th centuries, and received five charters in the time – from the first in 1326 by Edward II’s charter in 1326 to a charter granted by James I to 1619.

Carlingford’s rich merchants built a pretty town, and surviving gems from that time include the remains of the Mint and Taffe’s Castle.

However, the wars and conflicts of the mid and late 17th century severely damaged the economy of Carlingford, and by 1744 the town was in a “state of ruin.”

Because no heavy industries developed in Carlingford, the town has retained much of its mediaeval charm and many of its archaeological artefacts remain relatively intact. 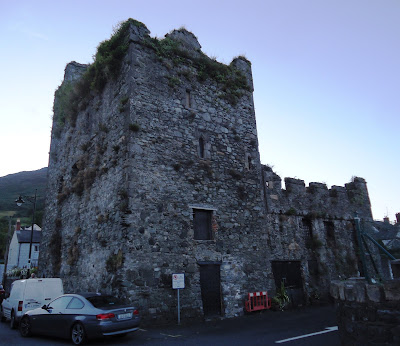 We parked beside Taaffe’s Castle, a fortified town house that once belonged to the Taaffe merchant family who became Viscounts Taafe and Barons Ballymote in 1628 and Earls of Carlingford in 1661. The main tower of the castle was built in the early 16th century while the extension to the side is a late addition. The ground floor probably served as a trading depot while the upper floors provided the Taaffe family with a town house.

Nicholas Taaffe, 2nd Earl of Carlingford, was killed at the Battle of the Boyne fighting for King James in 1690. After the Williamite wars, the family joined the flight of the Wild Geese from Ireland, and moved to Austria.

Despite their Jacobite loyalties, the family titles were restored, and the fourth and last Earl of Carlingford was Theobald Taaffe, who died in 1738.

The subsidiary family titles, Viscount Taaffe and Baron Ballymote, survived in a branch of the family that also held the Austrian title of count or Graf von Taaffe. But Heinrich Taaffe (1872-1928), Graf von Taaffe and 12th Viscount Taaffe, aligned himself with Austria and Germany against Britain in World War I, and the Taaffe title was one of only three primary titles – along with those of the Duke of Albany and the Duke of Cumberland – declared forfeit under the Titles Deprivation Act 1917.

In 1919, the Austrian title was abolished along with all other Austrian noble titles, and Heinrich became plain Mr Taaffe. In 1967, with the death of the 12th Viscount’s son and heir, Edward Charles Richard Taaffe (1898-1967), all these titles and any claims to them became extinct.

Today, Taaffe’s Castle is a pub, with an attractive flower-filled beer garden between the modern premises and the old fortified tower-house. 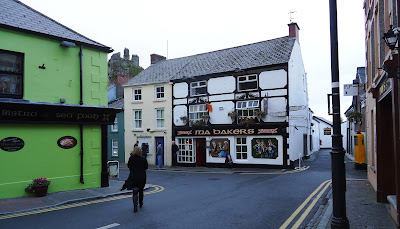 The Market Square … the main street of Carlingford, with a layout that dates back to 1358 (Photograph: Patrick Comerford, 2013)

From Taaffe’s Castle we strolled into Market Square, now the main street of Carlingford, but with records of a weekly market dating back to 1358.

We were taken aback by the choice of restaurants in Carlingford on Sunday night. Eventually, across the street from Taafee’s Castle, we opted for the Baytree, a chef-owned family business linked with the Belvedere House Bed and Breakfast. There, we had hand-made Agnoletti of sweet potato and spinach, served in a gorgonzola cream sauce, and salmon, and two glasses of house wine.

Darkness was closing it as we left the restaurant, and a strong wind had blown over the potted bay trees at the door into the Baytree. The tide was in, and there was no opportunity for a walk on the beach or a further stroll through the mediaeval town. 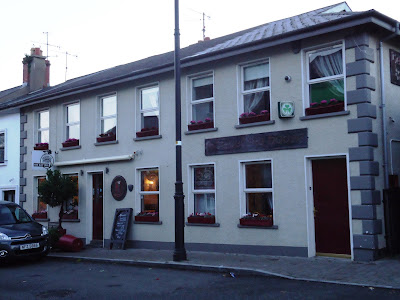 The Baytree … dinner for two in Carlingford (Photograph: Patrick Comerford, 2013)

We only had a short stroll along the shoreline by the harbour. But we never got to see the Tholsel, the Mint, the Dominican Friary, the Town Wall, Ghan House or the former Church of Ireland parish church, the Church of the Holy Trinity, now used as a local heritage centre.

A silver moon was rising in the east, and darkness enfolded the countryside as we rejoined the Belfast-Dublin road at Ballymascanlon, north of Dundlak.