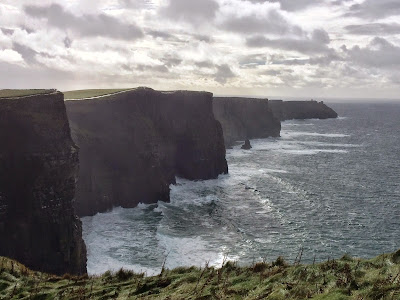 The Cliffs of Moher are nothing less than spectacular and breath-taking (Photograph: Patrick Comerford, 2014)

Today marks the beginning of a bank holiday weekend known to many people in the west of Ireland as the “Hallowe’ens.” The bank holiday seldom falls on Hallowe’en itself, but it always falls at the end of October, and this weekend is marked by opera in Wexford, the marathon in Dublin and the clocks going back.

From now on, the days are getting shorter and the evenings are truly closing in. This weekend marks the transition from autumn to winter, and because it often coincides with a mid-term break in schools it is the last opportunity many families have for time off together before Christmas arrives at the end of the year.

Many years ago, many decades ago, I spent this weekend as the last weekend on Achill Island before returning in the Spring.

Today [24 October 2014], two of us marked the beginning of this holiday weekend and returned to the West of Ireland. But instead we took a one-day tour to the Cliffs of Moher and Co Clare with Paddywagons.

Many years ago, I might not have given a tour like this a second glance. But the offer came on Groupon, and two of us thought: well, if there was an offer like this in Crete or Italy we would go for it … why not in Ireland?

Someone said earlier in the week: “But the bus is going to be full of tourists!” But we are tourists when we go on trips like this on holidays. They’re going to be just like us. Why not go for it? After all, I had been in the Burren only once before, as far as I recall, and I do not remember ever visiting the Cliffs of Moher.

It was a memorable day with John, an entertaining guide working with Ireland’s leading tour company, which has been on the road since 1998. We visited rugged landscapes and coasts, fishing villages and ruined monasteries, traditional pubs and a great castle. It was a 12-hour tour that took us through 11 counties, three provinces, and across the Shannon twice. 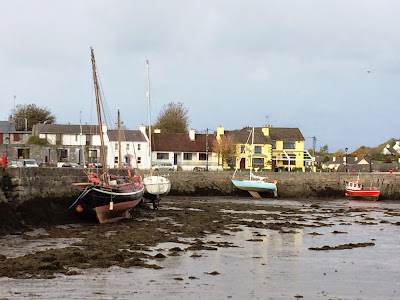 We began our tour in O’Connell Street in Dublin’s city centre at about 7.50 a.m. and had an early and short pit-stop for coffee at Enfield before driving across the Midlands, crossing the Shannon at Athlone, and turning off at the Oranmore roundabout for the south coast of Galway Bay and the Wild Atlantic Way.

After passing Dunguaire Castle, our first real stop was at Kinvara, a small, colourful and picturesque fishing village, known for its traditional fishing boats called “Galway Hookers.” In Kinvara, we strolled around the harbour, through the village, and through the stalls at this morning’s Farmers’ Market. 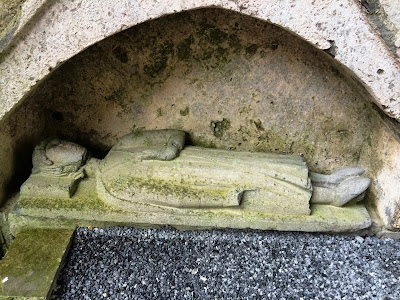 We crossed from south Galway into Co Clare and the Burren district, and our next stop was at the ruins of Corcomroe Abbey, in the middle of remote countryside. It was built ca 1205-1210 with local limestone. It was named Sancta Maria de Petra Fertilis, or Saint Mary of the Fertile Rock, perhaps a reference to its place in a sheltered, fertile green valley in the Burren.

Local legend says the monastery was built for King Conor na Siudane Ua Briain, who died in 1267 and whose tomb niche and effigy is in the north wall of the choir. The legend says he then executed the five masons who completed the abbey to prevent them from building a rival masterpiece anywhere else.

In reality, Corocomore Abbey was probably built by his grandfather, Donal Mór Ua Briain, who was the patron of a number of other religious foundations in the Thomond region. 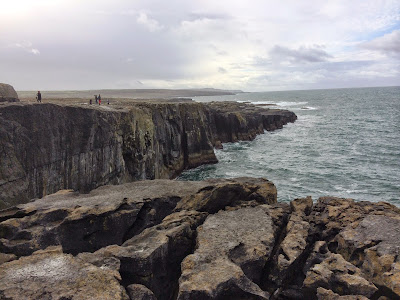 The ‘Mini Cliffs’ near Doolin in the heart of the Burren (Photograph: Patrick Comerford, 2014)

We then returned to a coastal drive along the southern shores of Galway Bay, as we made our way through the Burren. The unique landscape of the Burren is shaped by the limestone rock that stretches as far as the eye can see and reaches down to the Atlantic shore.

We stopped next at the “Mini Cliffs,” with views across Galway Bay and taking in the Aran Islands and out to Connemara. We also dared to take a small ramble through the rocky landscape of the limestone hillsides with their unique ecosystem and colours.

A little later we arrived for lunch in Fitz’s in the small fishing village of Doolin. This was the only disappointing part of the day. It was a carvery-style lunch, served in large dollops for large numbers, but hardly the best experience of Irish cuisine I can imagine – despite the fact that the Danish couple who shared our table seemed content.

I am a vegetarian, and the only option available for me was overcooked pasta. I noticed the only fish options were farmed salmon and a seafood chowder that had more potato than fish. In a fishing village, tourists should expect more. 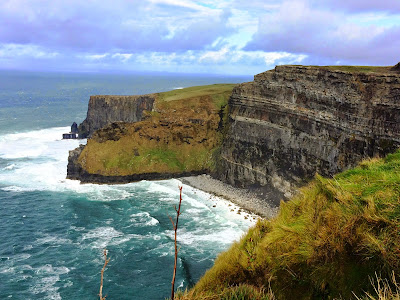 A tiny beach hundreds of feet below the towering heights of the Cliffs of Moher (Photograph: Patrick Comerford, 2014)

But the highlight of the day was nearby at the Cliffs of Moher, a few minutes away and on the south-west edge of the Burren, where we stopped for an hour and a half.

The Cliffs of Moher, which form part of the edge of Western Europe, attract a million visitors a year. They stretch for almost 10 km, and are two-thirds the height of New York’s Empire State Building.

The rain could not take away from the pleasures and attractions provided by the breath-taking views as we walked along the cliff edge.

We also visited the Atlantic Edge Exhibition in the interpretive exhibition centre, housed in an underground, domed cave with exhibits and displays. 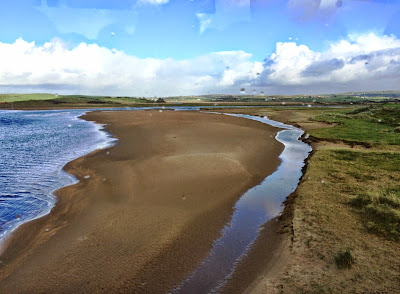 As we left the cliffs, the rain was coming down heavily but there was a rainbow in the sky, and the rains had passed as we drove on through the winding roads of Co Clare and Lahinch and Ennistymon, entertained by John’s song and “Limericks.” 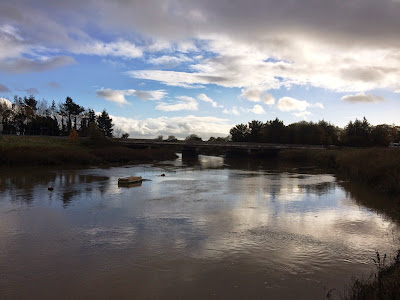 Our last stop was at Bunratty, to see Bunratty Castle, Dirty Nelly’s and the river estuary below us, before having a scone at Lilly Mai’s.

The journey back to Dublin took us across the Shannon on the outskirts of Limerick and through the tunnel. We returned through Moneygal – still boasting about its links with Barack Obama – and the Midlands, where many of the fields were still green and golden. It was dark by the time we reached the centre of Dublin, 12 hours after setting out, but there was still a feeling of autumn in the dark, night air.

Tiny islands in the River Shannon at Limerick this evening (Potograph: Patrick Comerford, 2014)