Exploring the islands of the Gulf of Fethiye 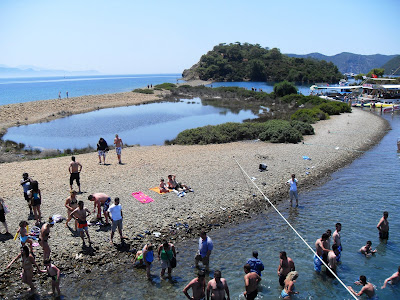 There are at least a dozen islands scattered through the waters of the Gulf of Fethiye (Photograph: Patrick Comerford, 2011)

The Gulf of Fethiye has at least a dozen islands scattered through its waters, and agents lining the promenade sell a variety of tours of the Gulf, from late evening boat trips to watch the sunset, to quick visits to nearby resorts such as Çaliş, to hiring a gulet for a few days sailing around the peninsulas, bays and islands of south-west Turkey. Other rent their boats for private parties, and I even spotted one boat for sale at the seemingly bargain price of €28,000.

But one of the most popular trips for tourists – Turks and foreigners alike – is a one-day multi-island boat tour. 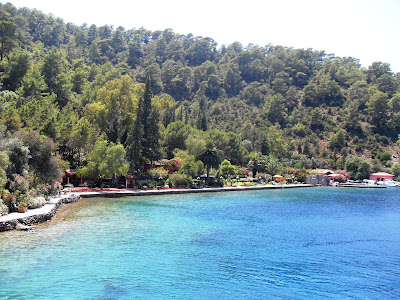 At every stop, the Aegean waters were inviting (Photograph: Patrick Comerford, 2011)

In all, there were five or six stops, including one at “Pig Island” where the boat tied up at the rocks because the shoreline jetty is, reportedly, owned by a rich Saudi businessman from Riyadh.

At every stop, the water was inviting – even for women in their burkinis and bikinis and everything in between. The water had that unique combination of colours – rich turquoise, aquamarine, deep blue, and even occasionally the wine red of Homer – that is only found at its fullest in the Aegean. 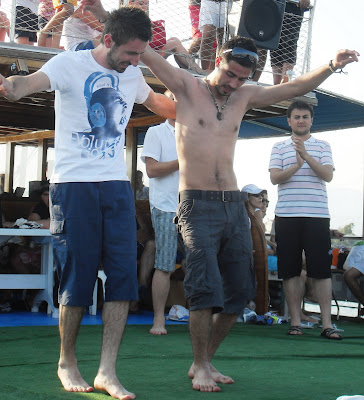 A spontaneous display of traditional Turkish dancing on the deck of the Hanedan-2 as it sails into the harbour at Fethiye (Photograph: Patrick Comerford, 2011)

As the day came to an end, there was a spontaneous outbreak of traditional Turkish dancing by some of the younger men on the top deck. Out in front, above the harbour of Fethiye, the Lycian rock tombs and the Knights’ Castle were standing out in the glowing colours of the late evening.

Last night, I had another walk on the beach at Ölüdeniz, under the moonlight, before a traditional Turkish dinner in the Çetin Motel.

This morning, I have an early stary, catching a bus to Kaş, and from there a ferry to the small Greek island of Kastellórizo.
Posted by Patrick Comerford at 06:00 1 comment: