‘The Sea, the Sea’ in Bray during
Saturday afternoon on the Prom 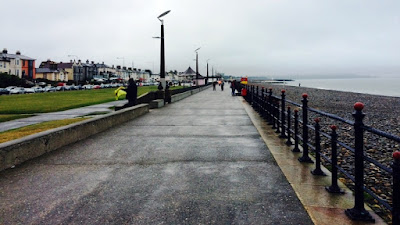 For many people, if it’s Saturday and it’s summer, then it must be ‘Saturday at the Proms,’ with the Last Night at the Proms as the climax of the season on both radio and television.

This year on Saturdays, Proms Extra, the Proms magazine programme, is hosted by Katie Derham. The show covers performances from the previous week’s Proms, has interviews with artists appearing at the Proms and looks forward to the musical week ahead. The Last Night of the Proms this year is on 12 September.

It was ‘Saturday Afternoon on the Prom’ today for two of us when we had to think again about a planned walk on the beach at the Silver Strand near Wicklow. As we drove south towards Wicklow, the grey skies turned to rain, and the Wicklow Mountains were shrouded in rain clouds and mist. 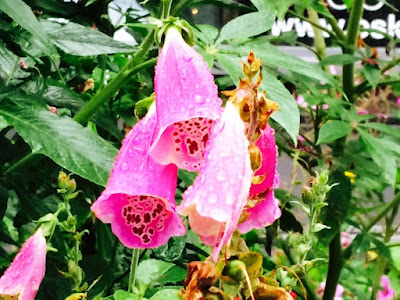 Summer flowers in the rain at the Avoca Café in the Mount Usher this afternoon (Photograph: Patrick Comerford, 2015)

We turned off at the M11 at Ashford, and decided to have lunch at the Avoca Café in the Mount Usher Gardens.

In summer weather, this is an ideal place to sit in the garden and enjoy afternoon lunch in the sunshine. But it was just as pleasant this afternoon to sit inside and enjoy the views of the garden, with the rain acting in a translucent way to enhance the colours outside.

We stopped briefly outside Ashford to buy strawberries from Enniscorthy on the roadside and then drove on through Greystones to Bray, where we went for a short Saturday afternoon walk along the Promenade, and stepped down onto the beach for a short, brief stroll along the shoreline.

Despite the rain, the water was calm, and a few small sailing boats from Bray Sailing Club were moving out from the harbour into the sea. 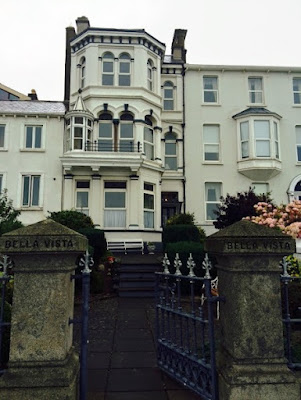 One of the attractive features of the seafront in Bray is the Victorian architecture of the once elegant Victorian houses and hotels on Strand Road. Some of these have been converted into bed and breakfast accommodation, some into nursing homes, and others into flats and apartments.

But some of these houses retained their Victorian charm and elegance and are still used as family homes.

One that caught my eye late this afternoon is Bella Vista, which was built in the early 1890s as a seaside villa by Joseph Michael Meade (1839-1900), a building contractor who was twice Lord Mayor of Dublin, in 1891 and again in 1892.

Meade was educated at Trinity College Dublin before becoming a partner in his father’s expanding building business by 1871. After the death of his father, Michael Meade, he continued to build up the business until it employed on average about 900 men.

His contracts included the masonry for the Loop Line railway, the Roman Catholic church in Bray, the Convent of the Little Sisters of the Poor on the South Circular Road, Kilmainham, and the Guinness printing works.

Meade was a Parnellite Nationalist in politics and was elected to Dublin Corporation in 1886 as an alderman for Trinity Ward. He was High Sheriff in 1889 and Lord Mayor in 1891 and 1892 and later represented the Corporation on the commission which was set up to inquire into the causes of the high death rate in Dublin. In the 1890s he was also president of the Dublin Master Builders’ Association.

Meade received an honorary LL.D. from TCD in 1892 and became a member of the Privy Council for Ireland in 1893. In politics, he was a. He died suddenly on 14 July 1900 at his home in Ballsbridge, Saint Michael, Ailesbury Road, and was buried in Glasnevin Cemetery. 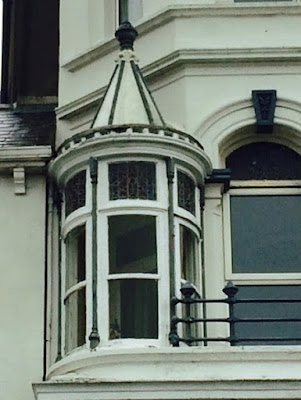 Bella Vista, his summer villa on Strand Road in Bray, is currently on the market with Sherry Fitzgerald Bray, with an asking price of €750,000. It has views across the bay as far as Lambay Island and a view over to Bray Head.

Many people know this house on the seafront for its unique “look-out window” and iron-railed balcony. Inside, many original period features are intact, including marble fireplaces, beautiful cornicing and ceiling roses, working window shutters and stained glass panels on windows.

The front garden, with an array of shrubs and bushes, is meticulously maintained and planted in raised flowerbeds to the side. It has been praised as the “Best Summer Garden in Bray” and the “Best Garden at Bray Seafront.” 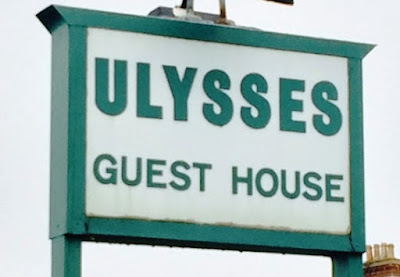 Ulysses … an appropriate name for a seafront guesthouse in Bray Photograph: Patrick Comerford, 2015)

A few doors away is a Bed and Breakfast house known as Ulysses, which seemed an appropriate name by the sea on this grey afternoon.

In Ulysses, Buck Mulligan’s first mention of the sea is when he says to Stephen: “The snotgreen sea. The scrotumtightening sea. Epi oinopa ponton. Ah, Dedalus, the Greeks. I must teach you. You must read them in the original. Thalatta! Thalatta! She is our great sweet mother. Come and look.”

In his errata for the first edition, James Joyce specified that he wanted this to be “grey” sweet mother. This may be an interesting if somewhat obscure allusion to grey-eyed Athena, the protector of Odysseus.

The Homeric epithet ἐπὶ οἴνοπα πόντον is, perhaps, the best-known quotation from ancient Greek literature and occurs several times in the Odyssey. However, the precise meaning of οἴνοπα (“wine-red,” “wine-faced,” “wine-dark,” “wine-coloured,” or something else) is the subject of endless scholarly debates.

But when Joyce puts these words into Mulligan’s mouth, he is not offering any compliments to Mulligan’s scholarship and pronunciation of the Classical Greek which Mulligan would have learned at Oxford. 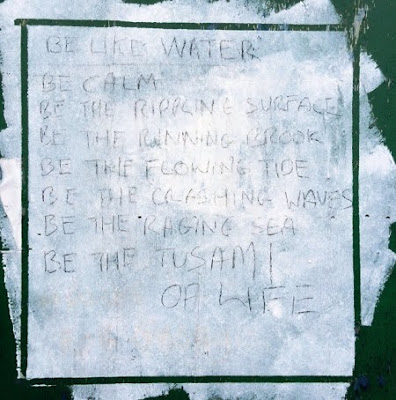 The sea, the sea … graffiti on a hoarding in Bray this afternoon (Photograph: Patrick Comerford, 2015)

θάλαττα θάλαττα (Thalatta! Thalatta!, “The sea! The sea”) is a familiar quotation from Ἀνάβασις (Anabasis, The Inland Expedition), the best-known work by Xenophon, narrating one of the great adventures in human history.

The joyful cry of the Ten Thousand Greek mercenaries on finally reaching the Black Sea is another of the best-known quotations from ancient Greek literature. “The sea! The sea!” means that at last they are back among Greek cities, although they have not reached the end of their journey.

Once again Joyce is undermining Buck Mulligan’s pretensions to scholarship by having him quote such a familiar phrase and offering a debased translation.

But today, looking out on this grey Saturday afternoon on the Prom, the sea in Bray was grey rather than “snot-green” or “wine-red.” 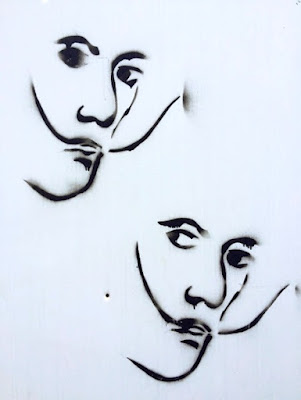