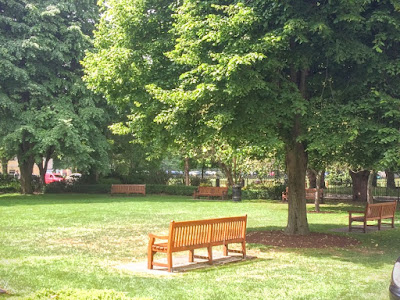 A quiet corner in the sun in Trinity College Dublin this morning (Photograph: Patrick Comerford, 2016)

My busy week of three days at Swanwick for the meetings of the trustees and the council of the Anglican mission agency USPG was combined with the pleasure of lengthy walks in the countryside in both rural Staffordshire and rural Derbyshire between Sunday and Wednesday.

It came to end when I returned to Dublin late on Wednesday night, and I hit the ground running today. They may say a change is as good as a rest, but there was no rest today as I headed into the work of a busy academic committee in Trinity College Dublin this morning and the Dublin and Glendalough Diocesan Councils in Rathmines this evening.

When I arrived back in Dublin last night, the airport and the M50 were smothered in a thick fog, and the residual haze was still hanging around early this morning. But the sun was soon shining as the morning moved on, and in between those two demanding meetings, there was a chance in the mid-afternoon to meet an old friend for coffee in Rathfarnham Castle.

In the mid-afternoon, as the school day ends, the café at Rathfarnham Castle can be crowded with parents who meet up as they collect their children from school. While I was at Swanwick I missed my essential daily diet of double espressos, and thankfully the café was quiet – almost deserted – so that my caffeine habit could return to having its normal demands met.

The conversation lingered a little longer that we both expected. There were stories to share about friends we knew in The Irish Times and at Kimmage Manor, where we had both worked and studied; there were family friends and members to catch up and to share news about; there were travel experiences, holidays and city break alike, to share and compare; and we almost came close to solving all the political problems of these islands, from Sinn Fein to Brexit, from labour law to human rights; from taxation to the mobile phone bills.

Whether a change is as good as a rest, I have yet to find out. But time with friends certainly acts as a good antidote to the demands and busyness of committee meetings. 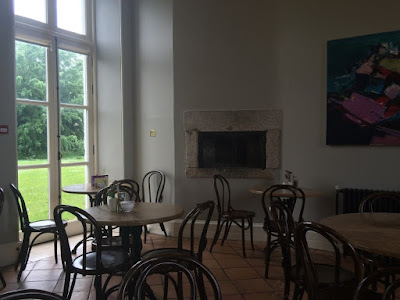 A quiet corner in the café in Rathfarnham Castle this afternoon (Photograph: Patrick Comerford, 2016)

Guy’s Almshouses: a Tamworth legacy
with the story of generosity and pique 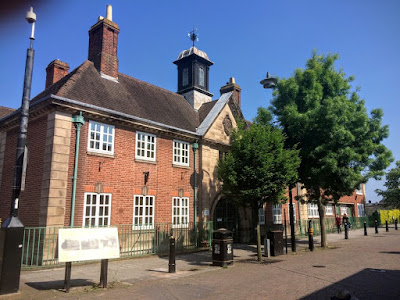 Thomas Guy’s almshouses in Lower Gungate, one of the architecturally interesting buildings in the centre of Tamworth(Photograph: Patrick Comerford, 2016)

My journey from Swanwick brought me on a train trip from Derby through Burton on Trent and Tamworth to Birmingham International Airport yesterday afternoon [8 June 2016]. I had revisited Tamworth on Sunday afternoon [5 June 2016] too on my way to and from a long walk in the countryside in Comberford.

Most visitors to Tamworth are drawn to Tamworth Castle, Saint Editha’s Church, the Assembly Rooms in Corporation Street, the Town Hall on Market Street, and the Moat House, although the former Comberford family Jacobean town house on Lichfield Street is now in a very sad state of neglect.

But I wonder how many visitors ever stop to admire the striking old almshouses in Lower Gungate, which is one of the architecturally most interesting buildings in the town centre.

The almshouses were established in the 17th century by Thomas Guy, a former MP for Tamworth. Guy’s original buildings dated from 1678 when he drew up plans for a block of almshouses for the maintenance of 14 old women, who received 4s 6d a week, with lodgings, coal, medical attendance and medicine.

Thomas Guy was born in 1644 in Pritchard’s Alley in Fair Street, Southwark. His father, also Thomas Guy, was a lighterman, coalmonger and carpenter with a wharf on the banks of the River Thames. His mother, Ann Vaughton, was originally from Tamworth. Ann was the daughter of William Vaughton of Tamworth, a very influential family, members of which for generations had become bailiffs, burgesses and church wardens to the ancient borough of Tamworth.

After Lichfield was captured by the parliamentary forces on Sunday 5 March 1643, two people from Comberford died as they fought on the Parliamentarian side: Richard Vaughton of Comberford was killed as he was engaged in building a trench on the west side of Lichfield, outside the Cathedral Close, and was buried in Saint Editha’s Church, Tamworth, on 21 March 1643, and Thomas Riccard of Comberford was slain in the Cathedral Close. This Richard Vaughton appears to have been an uncle of Thomas Guy’s mother, Anne Vaughton of Tamworth.

When Guy’s father died when he was only eight, his mother brought him to Tamworth, her home town, with his younger brother and sister. Thomas was sent to Tamworth Grammar School, which was then in Lower Gungate. In 1660, when he was 16, he returned to London to be apprenticed to John Clark, a bookbinder and bookseller in Cheapside. After the restoration of King Charles II in 1660, London was an exciting place. But Guy soon realised that life was difficult for those who were poor or sick, or living in crowded conditions.

Meanwhile, back in Tamworth on 18 June 1661, his widowed mother married Joseph Seeley of Coventry in Saint Editha’s Church, and the couple probably continued to live in Tamworth.

After finishing his apprenticeship in London, Guy started his own small publishing house. The Bible and Oxford University proved to be the mainstays of his business, and he was soon elected a Freeman of the Stationers’ Company and an Alderman of the City of London.

But as he prospered Guy did not forget Tamworth, where he had grown up, or his extended family there – the Ortons, the Woods, the Vaughtons and the Osbornes.

In 1677, Guy paid for the refurbishment of Tamworth’s Free Grammar School, and a year later, in 1678, he bought land opposite the Grammar School that had been the site of the guildhouse of the Guild of Saint George. There he built his almshouses for poor women, with generous provisions for the residents.

The original almshouses were built in 1678 at a cost of £200 and provided housing for seven poor women. Each resident had her own entrance and living room and the large central garden was used to cultivate vegetables. A large library also housed the books of Reverend John Rawlett. In 1692 the almshouses were extended to house men as well as women.

Thomas Guy first stood for election in Tamworth in 1690 but was beaten into third place behind Sir Henry Gough and Michael Biddulph. At his second attempt in 1695 he was returned as an MP with Sir Henry Gough without opposition, Guy was elected MP for Tamworth six times. 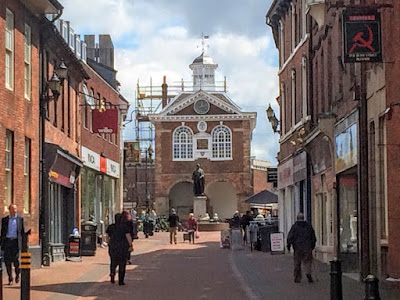 In 1701, he paid to build a new Town Hall in Market Street, and it was completed in 1702. The New Town Hall consisted of one large room supported by three rows of large pillars of stone with semi-circular arches, each row containing six pillars. The entrance of the room stood at the east end of the hall and the space below was to be used to hold the weekly market. In the centre of the roof was a large wooden glaze lantern with a weather-fane, leading out upon a platform guarded by a wooden balustrade.

But when he lost his seat as an MP, he was deeply hurt at being rejected by his own people. He abandoned his plans to build a hospital in Tamworth, either on Albert Road or on Lichfield Street, and transferred his large fortune to London, where he founded what would become Guy’s Hospital.

In his rage, Guy threatened to pull down the town hall he had built in Tamworth and to abolish the almshouses. The burgesses sent a deputation to meet him in London with the offer of re-election in 1710, but Guy rejected all conciliation, saying Tamworth had been ungrateful to him. He now abandoned all political ambitions and concentrated on making money to finance his philanthropic deeds in London. He died on 27 December 1724, at the age of 80, without ever seeing the completion of Guy’s Hospital.

Guy was buried in a vault in Saint Thomas’s Church, Southwark, but was moved to the chapel of Guy’s Hospital in September 1780, when the chapel was finally built. He never married and left his fortune to Guy’s Hospital, which opened in 1725. But even on his deathbed, the rejection he felt in Tamworth still continued to hurt him. He stipulated in his will that inhabitants of Tamworth should not be allowed shelter in his almshouses. Only his own relatives, together with poor people from the hamlets of Wilnecote, Glascote, Bolehall, Amington, Wigginton and Hopwas – all areas that voted for him – were to become residents. 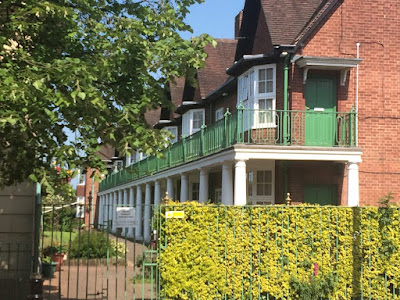 In time, Guy’s original almshouses fell into disrepair and the trustees decided they should be replaced. This original buildings were demolished over a century ago, and the present buildings were built on the same site.

In 1912, the old residents were moved temporarily to The Paddock – the Jennings family house in nearby Aldergate, later the site of the bus garage. The new almshouses were built at a cost of between £5,000 and £6,000, and opened within a year, in 1913.

The old tablet from Guy’s original building, with an inscription about the foundation, was placed above the main entrance to the new almshouses building. The stone plaque recalls Guy’s pique and original restrictions, declaring: ‘Guy’s Almshouses for relations and Hamleteers.’ This restriction still applies in relation to the boundaries of the borough, as they existed in his day. 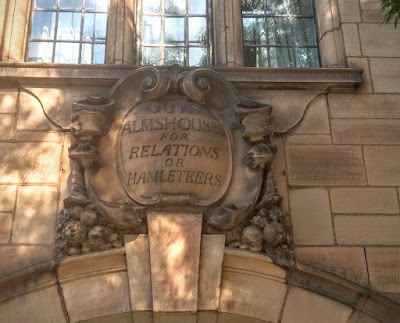