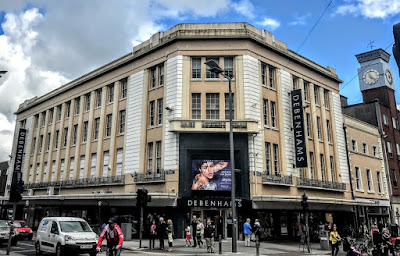 Limerick has a rich architectural heritage, particularly in the Georgian buildings that are part of the 18th and 19th century development and growth of Newtown Pery. In recent months, I have been enjoying this heritage and also exploring Limerick’s Edwardian architecture and the earlier mediaeval town around Saint Mary’s Cathedral and King John’s Castle.

There are classical banks and Gothic revival churches too. But I have been slower in coming to appreciate some of the mid-20th century buildings that also enrich the city’s streets.

Art Deco as a style in the visual arts, architecture and design first developed in France in the years before before World War I. Its name, shortened from Arts Décoratifs, comes from the Exposition Internationale des Arts Décoratifs et Industriels Modernes (International Exhibition of Modern Decorative and Industrial Arts) in Paris in 1925.

Many of the best surviving examples of Art Deco are cinemas built in the 1920s and 1930s, and I have written in the past about the sad loss of the former Regal Cinema in Lichfield, which was built in the Art Deco style.

. Two surviving buildings in the Art Deco style in Limerick, and that look like so many of those Art Deco cinemas, are the former Roche’s Stores, now Debenhams, on the corner of O’Connell Street, Patrick Street, Sarsfield Street and Arthur’s Quay, and the former ACC Bank, now the Permanent TSB, close-by at 131 O’Connell Street.

The former Roche’s Stores opened around 1937, and despite the change of name and ownership this remains a landmark building in Limerick City Centre. It stands on an important corner site and although its origins are relatively modern, it is the only corner building at this junction with architectural and historical significance. The other three sides were rebuilt in recent decades.

This fine Art Deco style department store, which is virtually intact externally, shows a stripped classicism with Art Deco features on the fluted piers that rise from the first to the third storey.

The angled corner entrance bay has tripartite windows on the second and third floor level over a double-height polished limestone entrance, and the corner is further emphasised by the flanking bipartite window bays.

The roof is concealed behind a parapet entablature, with a stepped acroteria to the end bays, and a blocking course stepping upwards over the corner entrance bay.

The elevations are arranged with channel rusticated walls framing recessed smooth window bays. These are articulated by the stepped stylised Doric piers with fluted capitals, rising from the first to the third-floor level.

There is a modern glazed shopfront, where the window bays are enhanced by wrought-metal balconettes. Throughout the building there are square-headed window openings with painted sills. The windows are glazed with either nine-over-nine, six-over-six, or four-over-four timber sash windows.

The polished granite doorcase rises to the second floor level and is surmounted by a masonry balconettte with a wrought-metal balustrade. It has canted reveals and a large glazed display window over the entrance, and both are separated by a canopied display window that dates from around 1980. 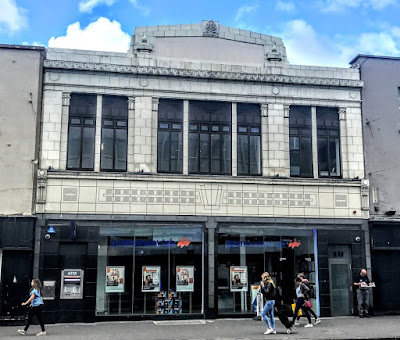 Classicism is given an Art Deco twist in the former ACC Bank on O’Connell Street (Photograph: Patrick Comerford, 2017)

Further along O’Connell Street, the Permanent TSB building, formerly the ACC bank, is an Art Deco building at 131 O’Connell Street. This is a unique building in Limerick, as it has the only known ceramic tile clad Art Deco façade in the city.

Its location close to the former Roche’s Stores gives added significance to this building. It is may have been built by Patrick James Sheahan in 1941. The building is largely intact, except for the fascia tiling, which may conceal the original tilework. The metal window is integral to the design of the structure.

This is a terraced, three-bay, two-storey ceramic tiled bank building, built in 1941 in the Art Deco style with Egyptian and Greek Revival motifs, with a pedimented parapet and two modern separate shopfronts at the ground floor.

The roof is hidden behind a parapet wall with a central pediment rising from an entablature of frieze with round discs, and a Greek-style key cornice below with a plain frieze and roll moulding.

Until recently, the pediment had raised ceramic tiled lettering reading: ACC Bank. Above the blank space, there is a palmette keystone that is flanked by two stylised flame burning urns.

On the first floor, the window openings are square-headed with a central tripartite opening flanked by bipartite openings, sharing a moulded ceramic tiled sill course and lintel course. Each opening has half pilasters with palm leaf capitals. The original metal casement windows to each opening have vertical lights and an over-light with a series of square-openings to the metal panels above.

The building has modern shopfronts with fixed-pane display windows and glazed doors, each with a polished granite clad surround. The original fascia above has a lead flashed cornice forming a sill course, and is flanked by the original console brackets with modern tiling to the fascia, dating from 2000, and with an imitation Greek key motif.

It is sad that the lettering reading ‘ACC Bank’ has been removed as this added a distinctive and dashing flourish to this building. 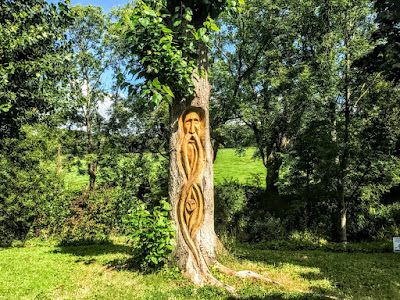 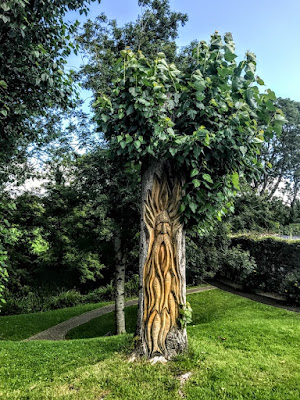 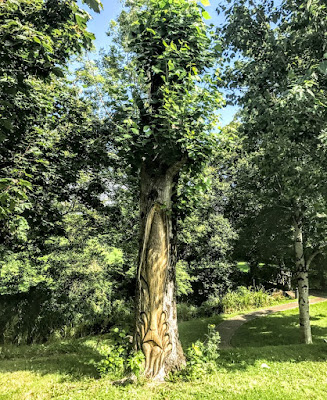 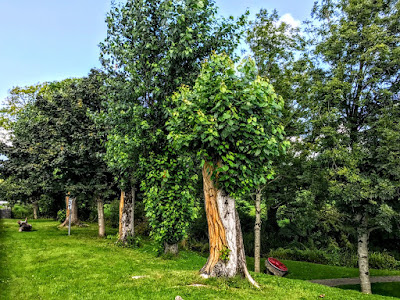