Three days in Armagh at the General Synod 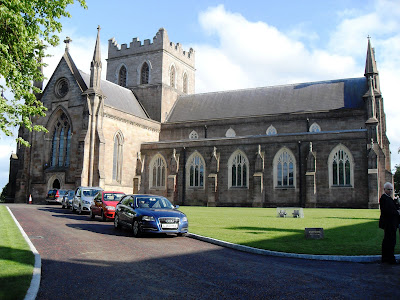 I am in Armagh for the rest of the week, taking part in the General Synod of the Church of Ireland, which is meeting in the Armagh City Hotel from today [Thursday 9 May 2013] until Saturday [11 May].

I am staying in the Charlemont Arms Hotel, just a two or three minutes’ stroll from Saint Patrick’s Cathedral, where the synod Eucharist is being celebrated this evening [Ascension Day].

Much of the time at this year’s General Synod will be spent debating reports from committees, councils, commissions and boards.

During the Synod, I have been asked to be one of the hosts for our ecumenical events, and this includes bringing them to the General Synod Eucharist this evening .

In association with the General Synod, the Council for Mission is hosting a mission breakfast tomorrow morning [Friday], when Bishop Ken Clarke, Mission Director of SAMS UK and Ireland, will speak on “Aim Lower. Fulfilling the Commission of Christ with Urgency, Imagination and Energy.”

Later, at lunchtime tomorrow, Changing Attitude Ireland will host a public talk by Steve Williamson, Director of Cara–Friendly, who will speak on “The Church and the mental health of gay and lesbian people.”

On Saturday, I have been asked to speak to the report of the Commission for Christian Unity and Dialogue, including its work in ecumenical affairs, Anglican relations, interfaith dialogue and European affairs. 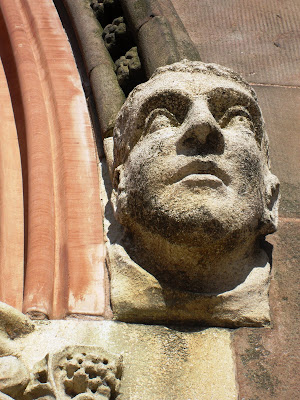 Archbishop John George Beresford commissioned extensive restoration of the cathedral in the 1830s. The architect, Lewis Nockalls Cottingham (1787-1847), came to Armagh after restoring Saint Alban’s Abbey, and in Armagh he tried to replicate some features that had impressed him in Saint Alban’s.

Cottingham was influenced by the ideas of AWN Pugin and the early Gothic Revival, and these influences can be seen in his restoration of the High Altar from the west end, where it had been relegated by Archbishop William Stewart at the beginning of the 19th century, to its proper eastward position in the form of a stone altar backed by a reredos of canopied niches.

According to William Makepeace Thackeray, Cottingham’s cathedral was “too complete ... not the least venerable. It is as neat and trim as a lady’s drawing-room.” Although the rood screen was removed in 1888, much of Cottingham’s work remains. 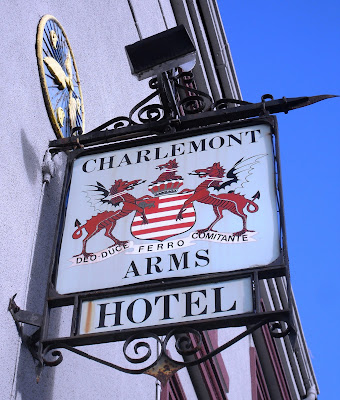 During these three days, I am staying at the Charlemont Arms Hotel in English Street in the centre of the city. The motto on the Earl of Charlemont’s coat-of-arms, over the hotel front door, which gives its name to the hotel, proclaims boldly: Deo Duce Ferro Comitante, “God is my leader, the sword is my companion.” The first part of the motto is appropriate for synod members staying in Armagh – although I have serious problems about the second part.

The hotel, which has thrived throughout the centuries, was originally known in the 1760s as “The Caulfeild Arms.” It was renamed in 1763, when James Caulfeild (1728-1799), fourth Viscount Caulfeild, was given the title Earl of Charlemont.

In 1746, at the age of 18 year, he was sent on a Grand Tour of Europe, accompanied by the Revd Edward Murphy as his tutor. During his nine-year-long Grand Tour, he spent a year in Rome and Naples before travelling on to Greece, where he was fascinated by the Parthenon in Athens and made drawings of the building long before it was destroyed by Lord Elgin.

After nine years, he returned to Ireland in 1755, and went on to build both the Casino in Marino and Charlemont House in Dublin, now home to the Hugh Lane Gallery of Modern Art.

He formed a political alliance with Henry Flood and Henry Grattan, and in 1780, as Lord Charlemont, he became the commander-in-chief of the Irish Volunteers. From then on was known as the Volunteer Earl, and in the heyday of the Volunteers, it is said, there was a Charlemont Arms in every Irish town of note. However, this hotel may be the only one to survive – something that makes the current proprietors very proud.

Today, the hotel is perfectly located between Armagh’s two cathedrals and close to the beautiful Mall, the theatre, city centre shops, the Armagh Planetarium and Observatory, the Armagh County Museum, the old Armagh Women’s Gaol.

And, of course, it’s a short stroll from the synod venue and many synod members are staying here. Once again – as with the General Synod in 2011 – this may be the place where a lot of the synod work is going to be done between now and Saturday afternoon. 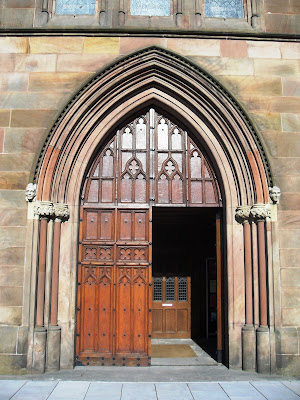