Noto: a monument to the golden age
of baroque architecture in Sicily

Looking through the doors of the Duomo in Noto on the Palazzo Ducezio below (Photograph: Patrick Comerford, 2015)

After spending most of Wednesday [29 July 2015] in Syracuse, I visited Noto in the late afternoon, a unique town in the south-east corner of Sicily. The town and its architecture are a monument to the golden age of baroque architecture in Sicily.

Noto is a traffic-free town and a former provincial capital, 32 km south-west of Syracuse at the foot of the Iblean Mountains. But this is a relatively new town, and was built to replace the older town, Noto Antica, 8 km away, after the earthquake of 1683.

The old town to the north was ancient Netum, where legend says Daedalus stopped after his flight over the Ionian Sea, and where that Hercules completed one of his twelve labours.

When the Arabs conquered Sicily in 1866, they made this one of their three district capitals on the island, and it became the last Muslim stronghold in Sicily to fall to the Christians at the end of the 11th century.

The old city and its economy were totally destroyed by the 1693 earthquake in 1693, and a new city was then built on the bank of River Asinaro, nearer the Ionian Sea. 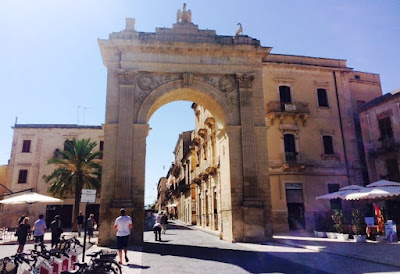 The Porto Reale, the entrance to Noto (Photograph: Patrick Comerford, 2015)

The new city was the vision of Giuseppe Lanza, Duke of Camastra, and was laid out on a grid system by Giovanni Battista Landolina. The architects Rosario Gagliardi, Vincenzo Sinatra, Paolo Labisi, Francesco Sortino and others, made the new Noto a masterpiece of Sicilian Baroque.

We crossed the Giardino Pubblico or Municipal Gardens and entered the city through the Porta Reale, built as recently as 1838, and strolled along the Corso Vittorio Emanuele, the heart of the city. 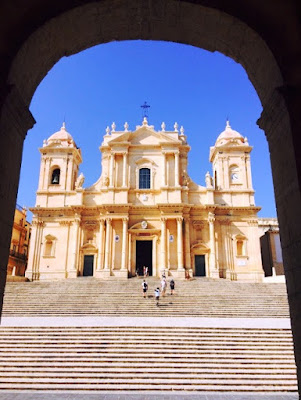 The Duomo, completed in 1776, is the most prominent building in Noto (Photograph: Patrick Comerford, 2015)

Most of the buildings are built with a soft tufa stone, and in the summer sunlight they reflect a warm, bright honey tone. They include cathedrals, churches, convents, bell towers, religious buildings, and several palaces.

Halfway along the Corso Vittorio Emanuele, in the Piazza del Municipio, Noto’s imposing cathedral or Duomo, the Cattedrale di San Nicolò di Mira, in the Piazza, was finished in 1776. Dozens of steps climb up to the towering cathedral its twin towers and an imposing dome that was restored after it collapsed dramatically in 1996. 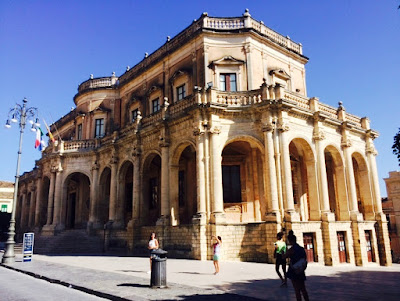 The Palazzo Ducezio is the town hall of Noto (Photograph: Patrick Comerford)

Down below on the street stands the Palazzo Ducezio, now the town hall. It was designed by Vincenzo Sinatra and is notable for its columns and balconies, with concave and convex twists and turns.

Before leaving, we stopped for a while and sipped coffees at the Caffe Sicilia, admiring the view up Via Corrado Nicolai, lined by the Palazzo Villadorata and the Palazzo Landolina, with the Church of Monte Vergine at the top.

In 2002 Noto and its churches were declared a World Heritage Site by Unesco. 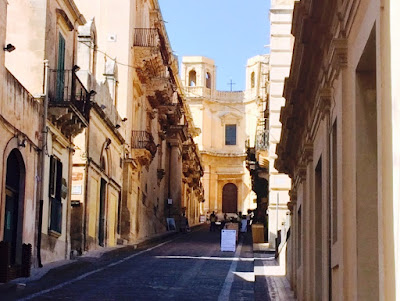 Via Corrado Nicolai, lined by the Palazzo Villadorata and the Palazzo Landolina, with the Church of Monte Vergine at the top (Photograph: Patrick Comerford, 2015)