Criticism over impact of 1916
events on Christ Church service 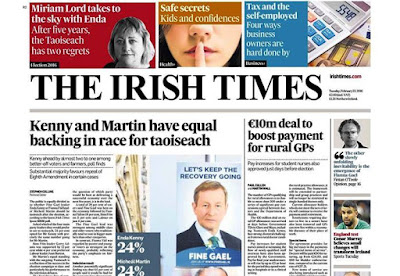 The following two-column news report is published on page 7 of ‘The Irish Times’ today [23 February 2016]:

Criticism over impact of 1916
events on Christ Church service

For the first time in almost 1,000 years it seems likely Easter will not be celebrated at Dublin’s Christ Church Cathedral this year due to the 1916 centenary commemorations, a prominent Church of Ireland figure has said.

“If this were to happen in Mecca or Moscow, under Saudi laws or Soviet diktats, you could imagine the righteous anger throughout the Christian world,” Revd Prof Patrick Comerford said.

A lecturer in history at the Church of Ireland Theological Institute in Dublin and a canon of Christ Church Cathedral, he said for the first time since the cathedral was built in 1030 it looked like the central act of worship in the church calendar would not take place there.

Speaking at St Mary’s Cathedral in Limerick, he said “the Easter Rising began on Monday, April 24th, 1916, which was neither Easter Day nor in March. But this year’s main centenary events are taking place on Easter Day, Mach 29th, 2016.”

Despite representations from the churches “a lock-down in Dublin is going to keep people away from Christ Church Cathedral and many other churches,” Rev Comerford said.

It was “not the first time that the Christmas message of Easter has been hijacked for political purposes”, he added.

Meanwhile, Archbishop of Dublin Michael Jackson said in a statement he and the authorities in the archdiocese were “appreciative of the Government’s willingness to consult” on access to city centre churches on Easter Sunday morning.

Senior clergy are to meet the Government and gardaí about access, he said.