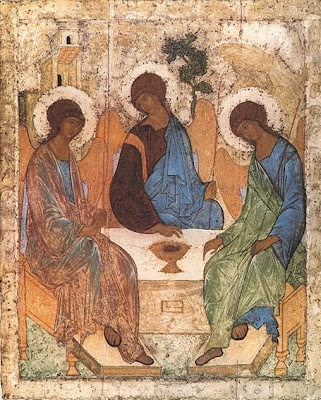 Andrei Rublev’s icon, the Old Testament Trinity or the Hospitality of Abraham.

Throughout the Western Church, we are marking today in the Liturgical Calendar as Trinity Sunday. This is the festal day for Holy Trinity Church, Rathkeale, Co Limerick – which is one of the four churches in my group of parishes – and this morning I am in both Castletown Church, Pallaskenry, and Holy Trinity Church, Rathkeale, presiding at the Eucharist and preaching.

As it was after the first great Pentecost that the doctrine of the Trinity was proclaimed to the world, it is appropriate that the feast of the Trinity follows that of Pentecost. However, this tradition of observing the First Sunday after Pentecost as Trinity Sunday has unique roots in the Anglican tradition. Although this day is observed in all the Western liturgical traditions – Anglican, Roman Catholic, Lutheran and Methodist – it is not observed in the Eastern Orthodox or Eastern Catholic traditions, and is not found in the history of the Early Church.

According to the Book of Common Prayer (2004), this Sunday is marked in the Church of Ireland as one of the ‘principal holy days which are to be observed.’ On this day, according to the Book of Common Prayer (p. 18), ‘it is fitting that the Holy Communion be celebrated in every cathedral and parish church or in a church within a parochial union or group of parishes.’ The liturgical provisions for this day ‘may not be displaced by any other observance.’

As I was preparing my sermons and selecting hymns for this morning [11 June 2017], I wondered how many parish churches in the Church of Ireland are respecting these liturgical provisions this morning? A quick glance at the Church Notices in The Irish Times online yesterday, or at the parish notices in many diocesan magazines this month makes one wonder.

Following the pre-Reformation Sarum use, both the Church of Ireland and the Church of England, name the Sundays that follow as ‘Sundays after Trinity,’ although in the US the Episcopal Church (TEC) now follows Roman Catholic usage, and calls them ‘Sundays after Pentecost.’

Although liturgically we are now in Ordinary Time, the liturgical colours change from green to white. The Book of Common Prayer (pp 771-773) places ‘The Creed (commonly called) of Saint Athanasius, also known as the Quicunque Vult,’ between the Catechism and the Preamble to the Constitution, but makes no provision for its use. However, some churches in the Church of Ireland and the Church of England, especially those with a High Church tradition, use this creed on Trinity Sunday.

The early Church had no special Office or day to honour the Holy Trinity. However, with the spread of the Arian heresy, the Church Fathers prepared an Office with canticles, responses, a Preface, and hymns, to be recited on Sundays.

There are prayers and the Preface of the Trinity in the Sacramentary of Saint Gregory the Great. However, the Micrologies, written when Gregory VII was Pope, call the Sunday after Pentecost a Dominica vacans, or an ordinary Sunday, when there was no special office, although it did note that the Office of the Holy Trinity composed by Bishop Stephen or Liège (903-920) was recited in some places on this Sunday, and in other places on the Sunday before Advent.

Pope Alexander II (1061-1073), refused a petition for a special feast on his day. Although he did not forbid the celebration where it already existed, he pointed out that such a feast was not customary in the Roman Church, and that the Church honoured the Holy Trinity every day with the use of the Gloria Patri.

When Saint Thomas Becket (1118-1170) was consecrated Archbishop of Canterbury on the Sunday after Pentecost Day, his first act was to decree that the day of his consecration should be held as a new festival in honour of the Holy Trinity.

This observance spread from Canterbury throughout the Western Church. In the following century, a new Office for the Holy Trinity was written by the Franciscan friar, John Peckham (died 1292), who was a Canon of Lyons and later became Archbishop of Canterbury.

Pope John XXII (1316-1334) ordered the feast for the entire Church on the first Sunday after Pentecost, establishing Trinity Sunday as a Double of the Second Class. It was only raised to the dignity of a Double of the First Class by Pope Pius X on 24 July 1911.

Surprisingly, this feastday never spread to the Orthodox Church. In the Eastern Orthodox and Eastern Catholic Churches, the Sunday of Pentecost itself is called Trinity Sunday, and instead the Sunday after Pentecost is celebrated as All Saints’ Sunday. The Monday after Pentecost is called the Monday of the Holy Spirit, and the next day is called the Third Day of the Trinity. Although liturgical colours are not as fixed in Eastern practice, where normally there are simply ‘festive’ colours and ‘sombre’ or Lenten colours, in some churches green is used for Pentecost and its Afterfeast.

One of the best-known presentations of the Trinity is found in Andrei Rublev’s icon, the Old Testament Trinity or the Hospitality of Abraham. This icon recalls the passage in Genesis 18, in which God visits Abraham and Sarah at Mamre. As the story unfolds, it becomes clear that Abraham’s guests – now only a single guest – is God.

Rublev’s icon itself is a masterpiece of composition: The viewer is being invited to join the meal; the doctrine of the Trinity as a community of Love into which the believer is invited to enter is depicted with clarity and simplicity; the icon communicates the idea that basis of the divine life is hospitality. The vanishing point in the sacred space is placed in front of the icon, inviting the viewer to enter into the holy mystery.

The author of the Letter to the Hebrews picks up the theme of the Hospitality of Abraham at the end of his epistle when he advises Christians not to neglect hospitality: ‘Do not neglect to show hospitality to strangers, for by doing that some have entertained angels without knowing it’ (Hebrews 13: 2).

The Collect of Trinity Sunday: 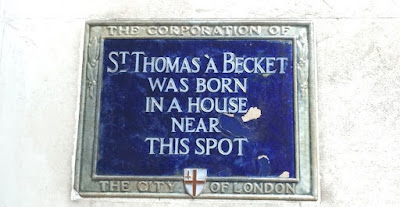 Some of this material was used in an earlier posting on Trinity Sunday in 2008.

Thank you for aiding my understanding of Trinity Sunday. I attend Trinity Lutheran Church in Milwaukee, Wisconsin, USA, and in our congregation Trinity Sunday is a beloved festival. I appreciate the historical insights you provided. Blessings on your ministry on this Trinity Sunday!