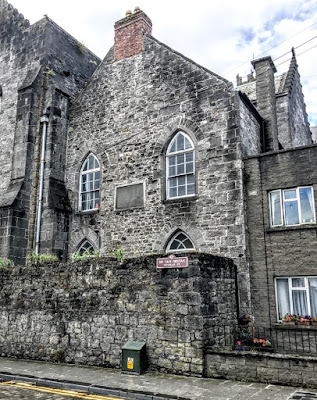 The former Bluecoat School in Limerick, beside Saint Mary’s School, was founded 300 year ago in 1717 (Photograph: Patrick Comerford, 2017)

In a hidden corner of Limerick, tucked into the space created between the chancel and the north transept, the former Bluecoat school can be seen boxed in the walls of the cathedral on two sides, am abutting flat roofed house on a third side, and hidden behind a high wall on the fourth side.

Limerick’s former Charity Blue School or Bluecoat School was founded 300 years ago in 1717. It closed after a scathing report in the mid-19th century, but the building remains an interesting part of the story of education and charities in Limerick.

A Bluecoat school is a type of charity school, the first of which was founded in the 16th century. Most of these schools have closed, but some remain open as schools, albeit on different sites, and some of the original buildings have been adapted for other purposes.

They were known as ‘bluecoat schools’ because of the distinctive blue uniform originally worn by the pupils. The colour blue was traditionally the colour of charity, and was a common colour for clothing at the time. The uniform included a blue frock coat, and yellow stockings with white bands.

Christ’s Hospital in London was the first Bluecoat school. It was founded by King Edward VI in Newgate Street, London, in 1552 as a foundling hospital to care for and educate poor children.

From the mid-16th to the late 18th century, over 60 similar schools were established throughout England and Ireland. Although they were not connected with Christ’s Hospital, they were also known as bluecoat schools because their pupils too wore the characteristic blue uniform. The original Christ’s Hospital, whose pupils included Samuel Coleridge and Charles Lamb, retained its name when it moved moved out of London to Horsham in West Sussex in 1902 and developed into an independent school.

In Ireland, there were Bluecoat schools in Cork, Derry, Dublin, Limerick and two in Waterford – one for boys and one girl – later incorporated as Bishop Foy’s School, which merged with Newtown School 50 years ago in 1967. The Bluecoat School in Dublin was founded by a charter from King Charles II in 1669. It was originally located in Blackhall Place, and is better known today as the King’s Hospital, now located in Palmerstown.

The Bluecoat School in Limerick was founded 300 years ago in 1717. The former school building is tucked against the side of Saint Mary’s Cathedral in the corner formed by the Chancel at the East End and the North Transept. Viewed from the outside, it is partly hidden behind a high wall and a neighbouring flat-roofed house on the corner of Nicholas Street and Saint Augustine Place.

The Charity Blue School or Bluecoat School in Limerick was founded in 1717 under the terms of the will of Canon John Moore, who had died the previous year, leaving a house known as the White Hart in Smithfield for the use of a charity school in Limerick.

John Moore was chaplain to the Irish House of Commons, Prebendary of Mulhuddart in Saint Patrick’s Cathedral, Dublin, Rector of Kilsaran, Co Louth, and Vicar of Saint Catherine’s, then a fashionable parish in Dublin city centre.

His father, Henry Moore, 3rd Earl of Drogheda, assumed the additional surname of Hamilton when he succeeded to the estates of his brother-in-law, Henry Hamilton, 2nd Earl of Clanbrassil. In a feat of egotism, Henry built and named Henry Street, Moore Street, Earl Street, Of (or Off) Lane (now Henry Place), and Drogheda Street (now part of O’Connell Street) in Dublin.

Canon Moore was also a son-in-law of Sir Charles Porter, twice Lord Chancellor of Ireland (1686-1687 and 1690-1696) and one of the signatories of the Treaty of Limerick in 1691. When Moore died on 1 June 1716, he was buried at Saint Peter’s Church, Drogheda, and his bequest was used the following year for the foundation of the Blue Coat or Blue School in Limerick.

The foundation was boosted in 1721, when an order in council granted £20 a year for a charity school. Three years later, in 1724, Mrs Alice Craven, the widow of an alderman of Limerick, gave some houses in Limerick, earning a rent of £40 a year, to the Bishop, Dean, Mayor, Recorder and their successors in trust for the Blue School. She later confirmed this grant in her will dated 17 January 1729.

In her will, Alice Craven also left a large house, sometimes described as ‘a castle near West Watergate,’ to house 12 poor widows who would receive 40 shillings a year. This house later fell into ruins and was pulled down. She also left £60 a year to the poor of the city parishes in Limerick and jailed debtors.

Originally, the school educated 15 poor boys from the neighbourhood, who wore a blue and yellow uniform and who were prepared for apprenticeship to trade in the city.

This charity school was supported by donations from the church, the congregation and the corporation. But a generation after its foundation, the school had fallen into decay by 1748.

The school was revived in the early 1770s by the trustees of the charity, William Gore, Bishop of Limerick, Maurice Crosbie, Dean of Saint Mary’s Cathedral, Christopher Carr, Mayor of Limerick, and Henry Bindon, the Recorder.

The house Alice Craven left to the new school stood on the corner of Saint Nicholas Street and Bow Lane (now Saint Augustine Place). A new school was built in 1771-1772 in the scholastic Gothic style while the north side of Saint Mary’s Cathedral was being rebuilt.

Building work on the new school began in August 1771, and was completed six months later. In opening a part of the cathedral wall to lay the roof of the Blue School, three cannon balls were found, from 18 to 24 lb, were found embedded in the wall.

This schoolhouse is an important structure architecturally as an early example of the scholastic Gothic style. It is a plain gabled building with pointed arch windows.

A plaque on the front facing Nicholas Street, behind the high wall, refers to the school’s restoration in 1772: ‘The Charity Blue School revived AD 1772. By order of the trustees. Right Rev Doctor William Gore, lord bishop. Hon and Revd Mau. Crosbie, dean. Chris. CarrChris, esq; Mayor. Henry Bindon, esq; Recorder. The above ball is one of a number fired from Park by king William’s army; and lodged in part of the wall of St Mary’s Church, to which this school house is adjoined.’

By the 1780s, 20 boys were being taught to read, write, keep accounts and sing in the cathedral, and they were clothed each year in the school uniform of blue and yellow that gave the school its name.

However, by the mid-19th century, the school was in a severe decline. In 1854, the school had 12 pupils, but this had dropped to four and then to three when there was inspection in 1858. The inspectors found the school was unsatisfactory and was only catering for cathedral choirboys who had lost their place in the choir when their voices changes.

An inquiry by the Commissioners for Endowed Schools in 1858 found the school had no master. Joseph Mullin had been the master and the principal tenor in the cathedral choir, but he had resigned just before the inquiry, which observed the absence of any proper inspection, examination and catechising.

The inquiry heard evidence from Henry O’Shea, Mayor of Limerick, who was disbarred from being a trustee because he was Roman Catholic. He believed the school uniform was a myth by then, and while boys had been seen around Limerick in the blue-coat uniform in the past, it was no longer seen.

The Bishop of Limerick, Henry Griffin, told the inquiry he had left the management of the choir and the school connected with it altogether to the dean. The Dean of Limerick, the Very Revd Anthony Latouche Kirwan, a trustee of the school, said that usually there were about five boys in the school. Fee-paying pupils had been admitted in the past, and numbered about nine boys, but he said the school got rid of as a nuisance.

Further evidence showed the free school and the choir school had been amalgamated. By 1855, there were no free boys or blue boys in the school, and by 1858 the school had only four pupils, who were named as Thomas Leonard, Thomas M’Auley, Edward Ivimy and Stephen Goggin.

Dean Kirwan claimed the original intention of the school was to teach boys to sing in the choir. This excused giving preference to singing boys, and excluding fee-paying pupils, even though this meant the master was paid a low salary.

Questions were raised about the number of free pupils returned, the financial embarrassments that led to the school uniform being discontinued, and the unsatisfactory accounts of the school. The houses left for the blue school were in ruins and the property and management of the school had been neglected.

The inquiry also heard evidence from John Watson O’Mahony secretary, collector of rates, on the state of funds from the original endowment and the dilapidated condition of the properties the school had been endowed with. Ralph Nash, a bookkeeper, also gave evidence on the condition of the houses, and John Boyse, solicitor to the Bluecoat School, Limerick, gave details of Mrs Alicia Craven’s original endowment and will.

The inquiry concluded that that the education provided for boys in the school was defective and unsatisfactory. It closed soon after, and later in the 19th century the school building was used for the cathedral Sunday school. 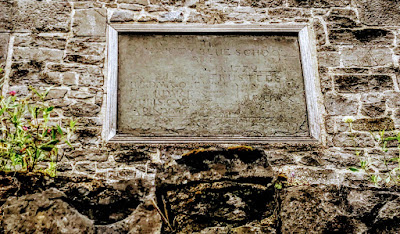 The plaque on the façade facing Nicholas Street recalls the rebuilding of the school in 1772 (Photograph: Patrick Comerford, 2017)

May I ask what historical histories you would recommend for Bluecoat schools in Ireland. Extant registers? Architects drawings? Thank you.

Thank you Edith. The archives of the King's Hospital in Dublin are particularly good. I imagine the Bishop Foy archives could be tracked through Newtown School in Waterford. I am not sure about Galway or Cork. My sources for Limerick include reports on Limerick charities, and the full legal report of the Commissioners' inspection and visits in the 1850s. Patrick.