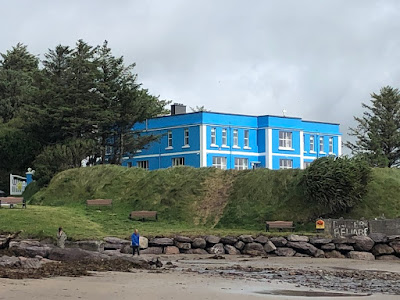 The former Saint Michael’s Convent above the beach in Ballinskelligs … the preferred venue for discerning teenagers for the 1966 World Cup final (Photograph: Patrick Comerford)

It was a weekend in July, I was in my teens, it was summer, and it was 55 years ago.

It was 1966, and Ireland had gone over the top marking the fiftieth anniversary of the Easter Rising in 1916.

But there was a real fear that I might fail Irish in the ‘Inter Cert’ the following year. Failing Irish at the time meant failing the full exam outright, and the consequences for families were dire: repeat the full year, which still provided no guarantee of success a second time; leave school and find an apprenticeship, which was never considered in a family such as mine; or being sent to England to a school such as Downside or Ampleforth.

Three of us were packed off to Ballinskelligs for a month to learn Irish. I boarded with cousins from Co Cork and learned much from them too; and when I returned home and was asked whether I had learned much Irish I answered smartly, ‘No, but I learned a lot about French, eh, French kissing.’

I was the butt of some slight humour – but all in good taste – because of what must have been a tinge of an English accent at the time. On the other hand, I remember feeling negative about that year’s commemorations of the Easter Rising in 1916. If Irish colleges were about shaping national identity then, despite my age, I realised already some people wanted to classify me as an outsider.

There was no doubt on Saturday afternoon, 30 July 1966, who was going to support in the World Cup Final. The main adventure that weekend was finding a place to watch it. Ballinskelligs was then a remote part of Kerry, it was not only part of the Gaeltacht, but it was single-channel land’ and – even then – there were few homes there with a television, and we never going to risk being caught in a pub at that age.

My cousins Dick and Tom from Millstreet came up with a cunning plan. They knew some nuns from the Presentation convent in Millstreet who were staying in Saint Michael’s Convent, the nuns’ summer house above the beach in Ballinskelligs. There would be hidden safely from anyone listening out for any teenagers at the summer college risking to speak English, to say nothing about cheering on the English football team.

Not only did the nuns welcome us, and allow us to monopolise the one television in their best room, but they even brought in biscuits, cake and soft drinks to keep us fuelled for the afternoon. For us, that alone was almost more memorable Geoff Hurst’s hat-trick and England’s controversial third goal – did it go over the line fully?

England had a 4-2 win over West Germany after extra time. It was the first only time that England hosted or won the World Cup and – until this evening – it remains England’s last final in a major international football tournament, and England’s only World Cup final to date.

We were not watching alone. The British television audience peaked at 32.3 million viewers, making it Britain’s most-watched television event ever.

When I returned in August after a month in Ballinskelligs, my parents never showed any evidence they had received any reports of my independent behaviour. And yes, I passed Irish in the ‘Inter Cert’ the following year – albeit a pass on a pass paper – and went on to finish the ‘Leaving Cert’ in 1969 at Gormanston College, Co Meath.

As I wait for this evening’s UEFA final between England and Italy – once again in Wembley Stadium – I know which team I am supporting again more than half a century later. But I am also smiling at teenage memories on a summer afternoon in July 55 years ago. 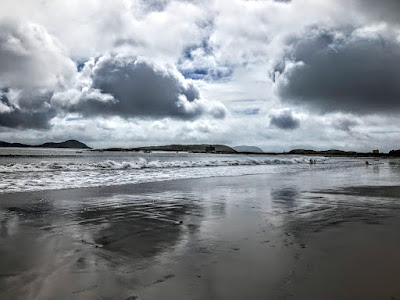 A summer stroll on the beach in Ballinskelligs (Photograph: Patrick Comerford)