An afternoon in Howth before the storm

Waiting for a storm on the West Pier in Howth this afternoon (Photograph: Patrick Comerford, 2012)

There are strong warnings of a storm tonight, and walkers and motorists alike are being told to stay away from coastal paths and roads as we prepare for the high waves. The weather warnings are giving a continuing alert for gale force winds from 90 to 130 kph across Ireland tonight, with the winds peaking between midnight and 3 a.m.

The full moon means the waves should be higher and the waters choppier tonight. As we drove out along the road through Clontarf to Howth this afternoon, some houses had sandbags outside preparing for the worst with the high tide tonight.

By the time we got to Howth, the waters were choppy, the weather was blustery, and there fast-moving grey clouds overhead without any sky to be seen. But there were no high waves at either the West Pier or the East Pier.

Thanks to a gift voucher given a few months ago, we went for lunch at the award-winning restaurant Aqua at the north end of the West Pier.

A view south to Sutton... but I could do no justice to the panoramic views offered on three sides from Aqua Restaurant in Howth (Photograph: Patrick Comerford, 2012)

On three sides, Aqua offers stunning sea views from Sutton around past Ireland’s Eye and across Howth Harbour to the coastline at Portmarnock and Malahide. However, the grey skies and choppy seas meant my camera was doing no justice to the panoramic views as we sat to eat.

Aqua specialises in seafood, but this vegetarian was also well catered for. One of us had Smoked Fish Risotto with Truffle Oil and Balsamic Dressing; Cod; Christmas Pudding; and an Americano. I had Grilled Asparagus, with Rocket Salad and Parmesan Cheese; Penne Pasta, with Basil and Tomato Sauce and Rocket Salad; and a double espresso. We shared a bottle of Sensi Pinot Grigio, a light semi-fragrant wine with a sweet lemon-citrus finish. 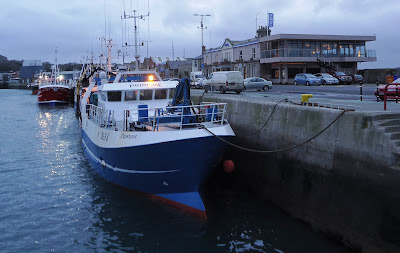 Looking back at Aqua from the West Pier in Howth late this afternoon (Photograph: Patrick Comerford, 2012)

From Aqua, we strolled along the West Per, which was busy with families taking holdiay walks. 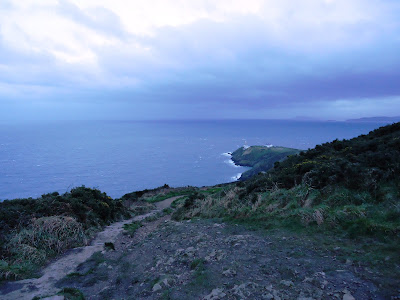 Looking down at the Baily Lighthouse from the summit at Howth Head this evening (Photographb: Patrick Comerford, 2012)

It was 4 p.m. when we decided to go up to Howth Summit to see whether the storm was rising. On each side, the dramatic cliff walk spread beyond us. Below us were the flickering lights of the Baily Lighthouse, built in 1814 on the south-east corner of Howth Head. It stands on the site of an old stone fort and there has been a hilltop beacon here since at least 1667.

To the south, there were views out to Dublin Bay, and across to the Wicklow Mountains. But the wind was too strong to attempt stepping out on the cliff walks, and daylight was fading fast.

We drove back through Sutton, Kilbarrack and Raheny into Dublin. At the Bull Wall, the wooden bridge was reflected in the waters that separate the North Bull Island and Dollymount.

The wooden bridge reflected this evening in the waters between the North Bull Island and Dollymount (Photograph: Patrick Comerford, 2012)