Anglo-Catholicism: a perspective from the US 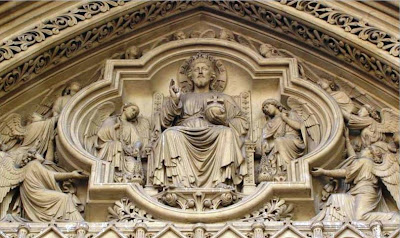 1. A High View of God: Anglo-Catholic worship at its best cultivates a sense of reverence, awe, and mystery in the presence of the Holy One.

2. A High View of Creation or a delight in the beauty of God’s creation: The Anglo-Catholic view of the world is highly sacramental, seeing signs of God’s presence and goodness everywhere in God’s creation. In worship, the best of creation – as reflected in art, craftsmanship, music, song, flowers, incense, etc – is gathered up and it is all offered back to God.

3. A High View of the Incarnation: Our salvation began when Christ took flesh in the womb of the Virgin Mary. God became human in order to transform human existence through participation in his divine life.

4. A High View of the Atonement: Evangelical detractors often overlook the fact that authentic Anglo-Catholicism looks not only to Christ’s Incarnation but also to his Sacrifice. Anglo-Catholic spirituality entails a lifelong process of turning from sin and towards God. And so, many Anglo-Catholics find the Sacrament of Penance an indispensable aid in this process.

5. A High View of the Church: We come to share in the divine life of the risen and ascended Christ by being incorporated through Baptism into his Body, the Church. And so the universal Church is neither an institution of merely human origin, nor a voluntary association of individual believers, but is a wonderful mystery, a divine society, a supernatural organism, whose life flows to its members from its head, Jesus Christ, in the power of the Holy Spirit.

6. A High View of the Communion of Saints: The Church includes not only all Christians now alive on earth (the Church Militant), but also the Faithful Departed, who continue to grow in the knowledge and love of God (the Church Expectant), and the Saints in Heaven, who have reached their journey’s end (the Church Triumphant). And so, we have fellowship with all who live in Christ.

7. A High View of the Sacraments: Christ really and truly communicates his life, presence, and grace to us in the Sacraments, enabling us to give our lives to God and our neighbor in faith, hope, and love. Baptism establishes our identity once and for all as the children of God and the heirs of the Kingdom of Heaven, even though we can freely repudiate this inheritance. In the Eucharist, Christ becomes objectively present in the Sacrament of His Body and Blood.

8. A High View of Holy Orders: Since the days of the Oxford Movement, Anglo-Catholicism has borne witness to the threefold ministry of bishops, priests, and deacons in Apostolic Succession. The validity of our sacraments, and the fullness of our participation in the life of the One, Holy, Catholic, and Apostolic Church, is intimately linked to the faithful stewardship of this gift.

9. A High View of Anglicanism: The Anglican Churches are truly part of Christ’s One, Holy, Catholic and Apostolic Church. Anglo-Catholicism has borne a prophetic witness to the catholicity of Anglicanism. Since the days of the Oxford Movement, the standard has been the faith and practice of the ancient, undivided Church, holding ourselves, and our Anglican institutions, accountable to the higher authority of the universal Church.

10. A High View of Mission: others may argue which came first, mission or the Church. But Anglo-Catholicism brought both together, for the church could not be confined to the boundaries of the state, any more than it was a department of state, and so, as a consequence gave us the world-wide Anglican.

11. A High standard of hymnody: whatever you think of Songs-of-Praise type services, where would we have been last Christmas without Fanny Alexander’s Once in David’s royal city or John Mason Neale’s Veni Emmanuel?

12. A Highly-tuned social conscience: if the Church is the sacrament of the Kingdom of God, then those who are nourished by its sacramental life must seek incarnationally to provide sacramental signs of the kingdom today.
(Compiled by Rev. John D. Alexander & Canon Patrick Comerford)

Do Anglo-Catholics believe in the doctrine of transubstantiation in the way Roman Catholics do? That the bread turns into the body of Christ in a real as opposed to symbolic way?

I find it difficult to answer when people ask me about the “Real Presence.” I prefer the way the Orthodox talk about “Sacred Mysteries” which is also an Anglican way of talking about the presence of Christ in the Eucharist throughout the Book of Common Prayer.

‘Twas God the word that spake it,
He took the bread and brake it;
And what the word did make it;
That I believe, and take it.’

Of course, these are not her words, but the words of John Donne, who wrote:

‘He was the Word, that spake it:
He took the bread and brake it;
And what that Word did make it,
I do believe and take it.’

These lines are normally attributed to John Donne, in ‘On the Sacrament’ in his Divine Poems. However, they are not in the original edition of Donne, and first appear in the 1654 edition.

Thank you. In its essence I think that perspective is pretty close to the meaning of the doctrine of transubstantiation as I was taught it, brought up as I was as an Irish decent Roman Catholic living in England: I became an affirming Anglican liberal catholic a few years ago, however. Thank you also for reminding me of how good a poet Donne was. It is many years since I read with great pleasure an anthology of the metaphysical poets of the 17th century,and I especially enjoyed Donne. I remember one of his poems beginning something like this: "Busy old fool, unruly sun." What a line!

The above comment was from Joe Forde but I must have pressed the wrong button.

Thank you Joe. Of course, you quoting the opening lines of ‘The Sun Rising’ by John Donne:


Busy old fool, unruly Sun,
Why dost thou thus,
Through windows, and through curtains, call on us?
Must to thy motions lovers’ seasons run?
Saucy pedantic wretch, go chide
Late school-boys and sour prentices,
Go tell court-huntsmen that the king will ride,
Call country ants to harvest offices;
Love, all alike, no season knows nor clime,
Nor hours, days, months, which are the rags of time.

Thy beams so reverend, and strong
Why shouldst thou think?
I could eclipse and cloud them with a wink,
But that I would not lose her sight so long.
If her eyes have not blinded thine,
Look, and to-morrow late tell me,
Whether both th’ Indias of spice and mine
Be where thou left'st them, or lie here with me.
Ask for those kings whom thou saw’st yesterday,
And thou shalt hear, “All here in one bed lay.”

She’s all states, and all princes I;
Nothing else is;
Princes do but play us ; compared to this,
All honour’s mimic, all wealth alchemy.
Thou, Sun, art half as happy as we,
In that the world’s contracted thus;
Thine age asks ease, and since thy duties be
To warm the world, that’s done in warming us.
Shine here to us, and thou art everywhere;
This bed thy center is, these walls thy sphere.